About as predictable as … something really predictable … Terry DiMonte and Ted Bird are back together again. At least in the short term.

After a summer vacation following his departure from his position as CHOM’s morning man, Terry DiMonte launched a new podcast this month with his old friend Ted Bird, called Standing By. Its episodes, available on YouTube, Spotify and Apple Podcasts, feature the two radio veterans reminiscing about the old days, their health, how they met, random anecdotes. Episode 2 focuses on the Canadiens, and Episode 3 on their time at Mix 96 (mainly going up against Howard Stern).

The podcast already has sponsors, namely those with long-standing relationships to Terry and Ted, including Matelas Bonheur, Jaguar Land Rover Laval and Merson Automotive.

END_OF_DOCUMENT_TOKEN_TO_BE_REPLACED

Ugh. Imagine doing a 4-step process every day and people STILL bug you about your acne? So not fair!

There’s a scene that plays out at the beginning of the second episode of Mic Drop, a new podcast by CBC Montreal. A young girl named Ava takes us through her skin care process to deal with acne. She uses a face cleanser, a moisturizer, and some oil product as part of a multi-step daily routine to try to cut down on the number of pimples on her face. The scene is edited together with thoughts from her about what it’s like having pimples, how people around her react to her, and how it makes her feel.

There’s nothing newsworthy about this segment, and it’s about one of the most normal of topics, but it’s surprisingly insightful. And a reminder to us olds that while we may have vague memories of what teenage life is like, we don’t really know that life, especially now.

Mic Drop, which runs for seven episodes, is filled with these kinds of stories, told directly by kids 11-17, without a host or narrator. The topics vary, from the mundane annoyances of acne to the very real issues of drug use and domestic violence, and plenty of stuff in between.

Interested by this format and the content of the podcast, I sat down with creator Shari Okeke last week to ask her about how it came together.

END_OF_DOCUMENT_TOKEN_TO_BE_REPLACED 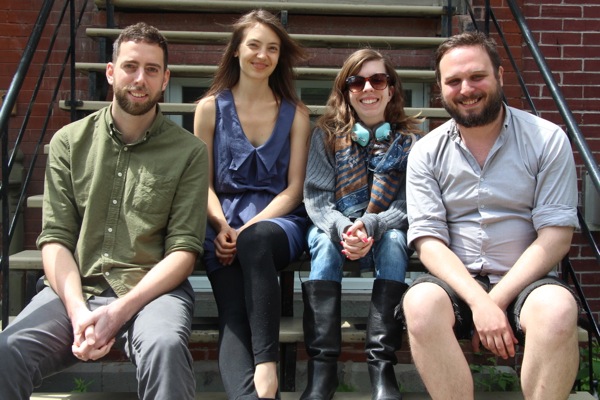 Midnight Poutine, the local culture/lifestyle/other stuff blog, has been shut down. But it’s coming back, someday. Hopefully.

The website stopped posting updates just before new year’s, and its homepage has been replaced by a page announcing a “new and improved” version launching “soon”.

The website, whose archives go back to September 2005, is owned by Toronto-based Fresh Daily, and is published by Tim Shore. Its sister site is the more popular Blogto, which continues running as normal. (A third Fresh Daily blog, Vancouver’s Beyond Robson, went dark in 2011.)

“We’re planning some big changes to the site — both in respect to the site design and content strategy — so we thought it would be best to put it on hiatus for a short time period,” Shore told me.

He wouldn’t elaborate on what those changes would be or what the focus of the new site would be. He also wouldn’t say when it’s coming back. “We’re not releasing either of these details to the public just yet,” he said. “Sorry.”

One thing that definitely won’t be back is the Midnight Poutine Weekend Playlist podcast, which passed the 300-episode mark in June. The last episode posted to Midnight Poutine’s website, No. 318, was dated Dec. 19, and featured the hosts saying goodbye and alerting listeners that they would be moving to a new site.

Greg Bouchard, who managed the podcast and acted as Midnight Poutine’s main editor, stepped down last month because he moved to Toronto for work. He insists there’s no animosity either way in his departure, but the podcast is being moved.

The new site is called Radio Cannon, and it’s owned by Bouchard. He describes it as a website devoted to helping people discover music through personal recommendations, and a complement to more automatic ways of recommending music used by sites like Rdio or Pandora.

“It was never the intention for the site to focus primarily on music,” Bouchard said of Midnight Poutine. “It was supposed to be a more balanced culture blog.”

But as a site that didn’t offer much (if any) money to contributors, it was a slave to what those people wished to contribute. More newsy elements of the site would come and go in waves, as new eager contributors came in and eventually got bored and stopped. In Bouchard’s case, his interest was mainly music, which meant the site had a strong music focus.

Bouchard wouldn’t get into much detail about his reasons for leaving, beyond the obvious one of having moved to Toronto. But he said he wanted to focus on music, and expand the podcast’s concept nationally, and Midnight Poutine did not seem to be the proper outlet for it.

Joining Bouchard at Radio Cannon are his podcast co-hosts Theo Mathien, Amie Watson and Emily Hill (Gabrielle LeFort, who was one of the podcast co-hosts last summer, left in September to take on a job with Evenko).

The Radio Cannon Montreal Podcast is basically identical to the Midnight Poutine one, right down to the “Hello Internet, salut cyberspace” introduction (though now enhanced with the sound of a cannon firing). Still about an hour a week of indie or underground music from bands that are playing at smaller venues in the city over the coming week, interspersed with some chatter about them (and details of their upcoming concerts) by the hosts.

Bouchard says he plans to start a similar one for Toronto in the next couple of weeks (he’s looking for a co-host) and eventually Vancouver as well. “As long as we can find the personnel, we’ll expand to other cities,” he said during the last Midnight Poutine podcast.

He notes that there’s a romanticized notion that Montreal’s music scene is more diverse or bigger than other cities, but at least in the case of Toronto “it’s just not true.”

He also wants to set up streaming music channels (some playlists are already up).

Will this turn into a business?

“It’s still a hobby, but we’d like to try to make a go at making it bigger,” Bouchard said. They’d be looking at getting sponsors, having audio ads incorporated into the podcasts, or finding other ways to generate revenue.

As for Midnight Poutine, its future is unclear. The rumour is that the relaunch would be more focused on food than music, but officially we don’t know anything. Will it be days, weeks, months? Who knows.

One thing is for sure: Without the podcast and its associated talent, it’s going to have to work much harder to build an audience. And to be successful, that work won’t come free.

The Gazette’s casual dining critic Sarah Musgrave interviews Chris (Zeke) Hand (formerly of the Zeke’s Gallery craziness) and Ed Hawco (of Blork Blog) about their current project, the Montreal Burger Report, a radio show for CKUT, audio podcast and blog, all about reviewing local restaurants for their burgers.

The article, which was apparently written from the mythical “casual dining headquarters”, includes an absolutely adorable picture of Hand taken by Hawco.

You can subscribe to the Montreal Burger Report podcast here.

La Presse’s Émilie Côté has put together an interesting little project, Michel Dumais points out: an audio guide to St. Laurent Blvd. The idea is that you download the “podcast” (media outlets need to learn what “podcast” means: putting audio or video online doesn’t automatically make it a podast – a podcast is something you subscribe to which doesn’t apply here), and listen to it as you follow its instructions and walk slowly up the Main from La Presse’s office to the Plateau.

The audio is very professionally done, and it shows that La Presse got professionals to produce and narrate this project instead of having some clueless in-house person to muddle their way through. I haven’t listened to the whole thing (I don’t have an hour and a half to spare), but it seems to work.

There is one nagging problem though: I can’t for the life of me find an MP3 download link, even in the extended user’s guide. You can listen to it live on the site (which is completely useless if you’re intending to listen to it while following its instructions), and you can click on a link to download it through iTunes, but if you don’t have iTunes you’re screwed. I don’t see the point in having website visitors forced to use a particular piece of software. Is Apple paying them or something?

UPDATE (Sept. 30): They’ve added a link to an RSS feed that has links to the MP3 files.

That said, if you don’t mind jumping through that unnecessary hoop, and you have a couple of hours to kill, it’s something to do.

Last week, the Bloc Québécois started running a minute-or-so-long podcast in which Frédéric Savard gives a fast-talking roundup of political news and ends each item with a pun or other bad joke about other parties in the election.

As a master of punnery and bad jokes myself, I have to say that some of them are funny (black holes and Denis Coderre) and some are beyond groaner territory (Stéphane Dion being “tragically un-hip”).

Still, it’s pretty entertaining as far as party activities online go. The Liberals and Greens don’t have podcasts that I can find. The Tories’ podcast is nothing but stump speeches by Stephen Harper, and the NDP podcast hasn’t been updated since 2005.

Montrealer Julien Smith is resuming his In Over Your Head hip hop podcast after an extended absence (and some sponsorship).

So if you like hip hop mixed with a guy talking about himself (and really, isn’t that what hip hop is all about?) go ahead and subscribe to the feed.