For those of you wondering when the political situation in Ottawa would be turned into a Der Untergang Hitler subtitle spoof, wait no longer:

Hell, it’s getting so bad even Rachel Maddow is making fun of us.

*This post was originally mistitled “Liebensraum.” Maybe it should have been Liberalsraum? 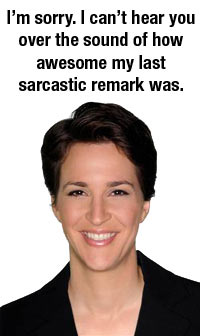 You know, I’m starting to understand why the Republicans don’t like MSNBC (and, by extension, NBC News).

For those of you who don’t subscribe to this digital cable channel, your exposure to MSNBC might be limited to those “Special Comments” of Keith Olbermann that get so much play on the intertubes. They’re popular because they’re well researched, very well written, and well delivered. They don’t mince words and don’t try to be diplomatic. They call out the administration (and, more lately, the McCain campaign) on those things they have done which are wrong.

It’s part of what got me to subscribe to the channel (other reasons include the fact that I’m interested in how various media outlets cover important events, and the fact that most cable television is a crapfest of old reruns that I refuse to hand over even the most nominal amount to support).

But the rest of Olbermann’s Countdown infuriates me, even though I agree with him. He picks on the most trivial of missteps by his political opponents, making fun of them for simple errors. His comments are sarcastic and mean-spirited, and not nearly as funny as he thinks they are. It’s ridiculously one-sided, especially for a supposed “news” network. His interviews consist mainly of regulars who agree with him on everything and laugh at his jokes. On the occasion when he has an actual, respectable journalist on the air, the guest becomes visibly uncomfortable as Olbermann blurts out leading questions that assume he is right and the Republicans are wrong.

And then, of course, there’s his childish feud with Fox News’s Bill O’Reilly, which he insists on wasting airtime pursuing. He’ll run off demographic ratings whenever an outlier puts him ahead, or take any opportunity to make fun of O’Reilly for whatever reason.

It’s the Fox News of the left. Daily Kos on TV. The ultimate in preaching to the choir, and hence educating and informing no one. Olbermann is like a schoolyard bully who thinks he’s cool because all his friends like it when he picks on the nerd.

But, for the same reason Rush Limbaugh has high ratings, Olbermann is also popular (enough so that he’s starting to catch up to CNN and Fox News). And not having any better ideas to increase its ratings, MSNBC has decided to replicate him.

That brings me to Rachel Maddow (hence the picture above). She’s the host of her own one-hour show which airs right after Olbermann’s. At 10 p.m., MSNBC repeats Olbermann’s show, proving I guess that nobody watches MSNBC for more than two hours.

Maddow, an Air America radio host and former Countdown contributor, is essentially the same thing as her lead-in. The same sarcastic remarks. The same partisanship. The same ego.

It irritates me. But what irritates me more is that the network has taken all three hours of primetime and devoted them to these two characters.

And yet, like Olbermann, Maddow seems to be drawing in the ratings (by MSNBC standards, anyway).

So look for this not to change anytime soon. Fox will have its Bill O’Reilly and Sean Hannity, while MSNBC has Olbermann and Maddow. CNN, which is already giving too much airtime to blowhards like Lou Dobbs, is the only one left that seems to make any attempt at staying neutral, of being cautious in its declarations, and seeking the truth no matter which side it may favour.

Maybe we need to create a place for these kinds of people. An all political opinion channel could put them all under one roof so they can be quarantined. You could create two – one run by the Democratic Party and one by the Republican Party – so they don’t have to see each other in the parking lot. And you can leave the news networks to doing what they’re supposed to be doing: bringing us the news.

Oh, and leave the political commentary for Stewart and Colbert (and, to a lesser extent, SNL and Bill Maher). They, at least, use partisan politics to improve their humour, not the other way around.

So apparently the biggest political news of the day had to do with a bird pooping on someone’s shoulder on a website. Canadian soldiers are dying in Afghanistan, our climate is becoming unstable, and our housing market is in trouble, but all of that is unimportant compared to analysis of whether a bird should be pooping on someone online.

Stephen Harper, whose Conservative Party website showed the pooping puffin, apologized for it after his handlers calculated that the bad joke went too far and was too personal (actually, it wasn’t personal at all, it was just pointlessly insulting). Stéphane Dion, the poopee, countered that this showed more about the Conservatives than about him, again following the politically appropriate route as instructed by his handlers and political strategists.

And the media, desperate for a scandal/process/horse-race story because they’re too lazy to research platform points and analyze actual policy issues, sucks it all up.

The excuses that the Conservatives give for this gaffe are the usual barely-believable stuff (a cursor was hiding it when it was approved? Give me a break). But there’s a reason why this was done, a reason why the person who came up with the idea crossed the line, and it’s a problem at the very heart of partisan politics.

Remember all those bad jokes during the Democratic and Republican conventions? Remember how the delegates found them much funnier than we did? In the partisan bubble that these politicians and their staff inhabit, the opposition is dehumanized. Instead of respected colleagues who challenge us to develop our positions on important issues, they’re seen as evil enemies bent on world destruction who must be mercilessly defeated.

That mindset leads to cruel, immature jokes and inevitable comparisons to Hitler. Nobody is there to stop them, because everyone in the bubble is part of the same partisan clique. But once those jokes leave the bubble and reach the reasonable, non-partisan outside world, it finally dawns on them that they were inappropriate.

I watched MSNBC during prime-time tonight, mainly because there was nothing better on TV. (It was mostly in the background as I caught up on some online reading.) The lineup consisted of liberal hero Keith Olbermann, followed by Air America talk show host Rachel Maddow, followed by a repeat of the Keith Olbermann show at 10pm. Listening to the two hosts, they sound identical (though one is much prettier than the other). They both use the same sarcastic points to bring down their enemies (in this case, John McCain, George W. Bush and the Republicans).

Even though I agree with them on their positions, I can’t help but cringe sometimes when I watch these shows. There’s that same immaturity, the same mean jokes, the same anoying smiles when they point out some flaw in the other side. And in Olbermann’s case, an ego the size of Alaska as he goes on with his boring feuds with the Fox News Channel and its pundits.

Olbermann and Maddow are, sadly, part of the problem. They have like-minded staff who won’t tell them that they’re becoming too biased toward the left. Those who do criticize are seen as the enemy or ignored.

The worst part is, some of these activists may be fully aware that they’re crossing over the line, but they accept their actions because they believe the ends justify the means.

Partisan hacks and political pundits need to learn what the politicians are already keenly aware of: cruel insults and immature jokes may get a good response from hard-core supporters who are drinking your Kool-Aid, but they turn off the rest of us, making us ashamed of both you and the political process.

Considering how much ink has been spilled over this issue over the past decades (remember when the PCs made fun of Jean Chrétien’s face?), it’s astonishing there are people who still haven’t learned to attack the issues and not the person.