Like much of the city, I spent Wednesday evening sitting in front of the TV welcoming the official return of NHL hockey, curious how it would look in the new TV environment. Unlike much of the city, I constantly switched between Rogers Sportsnet and TVA Sports to try to evaluate both networks at the same time. Here are some thoughts on how it went.

Note that I’m not a hockey expert, or an expert on hockey broadcasting. I can’t tell you which panelist’s comments were more insightful, or which play-by-play guy described the game better. I look at this with the eyes of the casual fan, and that’s how I’m evaluating this.

Both networks are just starting off 12-year deals that are costing them a nine-figure number. So naturally the season opener pregame started months ago. I only tuned in for the last 45 minutes or so, and both networks took advantage of this time to sell themselves and their plans for the coming season. Sportsnet was a mix of old faces from Hockey Night in Canada, new faces from Sportsnet that were less familiar to Canadiens fans, and faces from elsewhere like Darren Pang. There was Elliotte Friedman with his sit-down interview. And the $4.5-million studio and its bells and whistles saw some use, though not as much as we might have expected.

On TVA Sports, a new set that actually looked quite professional, and a panel of experts that when it comes down to it doesn’t strike me as much different from the panels you’ll find on Sportsnet or RDS.

At 7pm on Saturday nights was when CBC would give us a hockey montage to set the mood. Sportsnet didn’t go that way on this night, instead going with a monologue from Marc Messier about how great hockey is. It fell a little short to me, lacking emotion.

TVA Sports picked up the torch, though, and presented a musical montage of recent and ancient hockey footage set to Imagine Dragons’s Radioactive. It didn’t have the emotional punch of HNIC’s best Habs-Leafs montages, but it was still nicely done.

TVA Sports also had the better computer-generated graphics that followed, though everything repeatedly exploding and coming back together may have been a bit too much.

Rogers’s big new studio in the CBC building in Toronto didn’t get much use after the pregame show, and seemed to be limited to a desk with four chairs behind it. Maybe that will change on Saturday, but I felt they weren’t using it to its fullest potential.

TVA Sports’s studio looked quite nice. Not spectacular, but nice enough that it looks like they know what they’re doing and they’re doing it professionally.

Sportsnet viewers were treated to the recognizable voices of Jim Hughson and Craig Simpson, who have done this countless times before and just picked up where they left off.

On TVA Sports, it was the first big night for Félix Séguin and his partner Patrick Lalime. Though Habs fans have gotten used to hearing Pierre Houde calling their team, I don’t think it’ll take that much getting used to the new voice.

Or at least I thought that until the first time Séguin said “lance … et COOOOOMPTE!” That’ll take some getting used to after years of Houde’s “et le but!” (Even Séguin needs to get used to it apparently. He let out an “et le but” when the Canadiens scored a surprise goal in the last minute of play.) 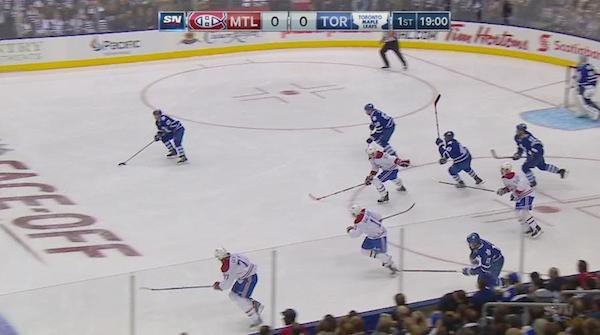 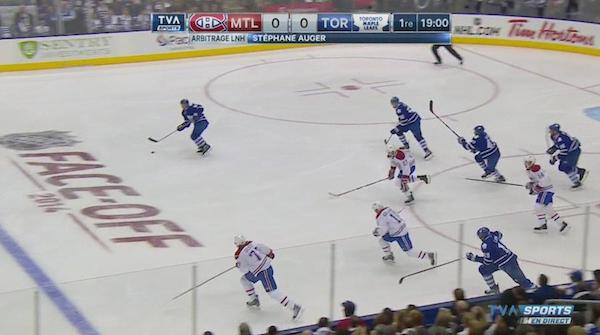 Sportsnet and TVA Sports clearly based their scoreboard graphics off the same software, with just the logo and the language different between them.

The graphics are block-ish, but they present the necessary information.

I should note that neither channel uses its own graphics for less important games. The late game on TVA Sports 2 just used the same Sportsnet feed with the same English graphics. Sportsnet One showed a late U.S. matchup that just piped in NBC Sports Network. It goes without saying that they don’t supply their own broadcast team either.

The giant Sportsnet hockey studio seemed pretty small during the intermission report, which mainly focused on a few talking heads around a table. Maybe it’ll be more impressive on Saturday nights, but I felt as though a first impression was wasted here. 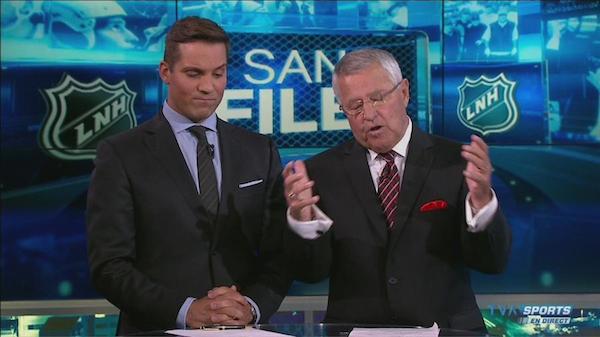 TVA Sports didn’t wow me with its Coach’s Corner-style first-intermission starring Michel Bergeron. But it was better for the second, featuring Paul Houde talking about how many points the Canadiens should need at key points of the season if they expect to make the playoffs, and Joel Bouchard with a brief on-ice segment about goalie strategy. This is the kind of stuff I’d like to see more of.

Sportsnet didn’t have much of a postgame. Five minutes after the end it had to tee up the late Canucks-Flames game. But the panel took a few minutes to discuss what happened and what it means for both teams.

At TVA Sports, the late game was moved to TVA Sports 2, allowing it to run Dave Morissette en direct, the postgame analysis show. It was fine, but talking heads who are experts on the NHL don’t wow me, especially when the same thing was happening on RDS and TSN.

But there were some odd moments. Like Sébastien Benoit in a bar in Boucherville passing the microphone around asking people what they thought of the game and getting two-word answers of approval. By all means show us reaction shots from Montreal bars, but no need to shove a microphone in their faces if they have nothing intelligent to say.

Overall, I’m hoping Sportsnet shows more pizzazz on Saturday and Sunday, but if not I think we can live with its broadcasts. TVA Sports clearly showed it put in the effort, and had some strong points that Sportsnet didn’t have, even though it has a smaller audience and budget.

But I’m just some guy on the Internet with an opinion. What did you think of the broadcasts?

See also: A review from Bill Brioux for Canadian Press