You’ll probably be seeing mention of this video in the local media in the coming days (hopefully some will actually look into the issue instead of just posting the video with baseless conjecture like I am here). It shows a metro train travelling between the Assomption and Viau stations on the green line with a door stuck open, and is already getting traction on Twitter.

It shouldn’t be difficult to see the very serious safety implications of this kind of failure.

Metro trains are designed with a safety system designed to prevent exactly this (which is why it’s so rare). When it detects that a door has opened beyond a set limit, it automatically commands the train to stop. This is what causes a train to come to an abrupt halt, usually as it’s leaving a station, when someone either accidentally or deliberately attempts to force a door open.

Clearly, unless this video is an elaborate fake of some sort, this system failed on this train. Hopefully it will prompt an investigation that ensures it never happens again.

Since the failure happened on an older MR-63 train, expect some people to link this to the age of the trains and the apparent desperate need to replace them with new ones from Bombardier-Alstom.

UPDATE (Nov. 9): The Gazette’s Max Harrold has preliminary details from the STM: It was just that door, it was locked closed when the STM discovered the problem at Berri-UQAM, and it has since been fixed.

The spokesperson also adds “someone should have pulled the emergency brake” – though those handles on board the trains don’t actually stop a train in motion, they merely prevent it from leaving the next station.

Just about everyone has picked up the story, with varying amounts of journalism involved:

The Metrodemontreal.com forum also has some discussion of this event and testimonials of similar things happening in the past. 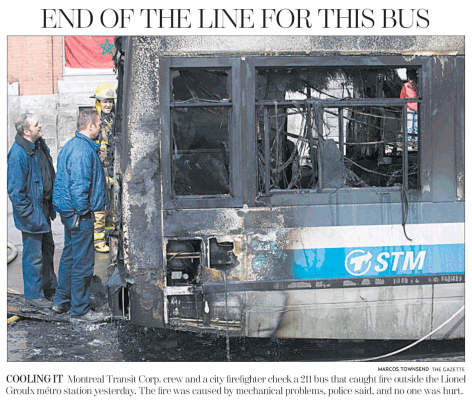 The text, in case you can’t read it:

COOLING IT  Montreal Transit Corp. crew and a city firefighter check a 211 bus that caught fire outside the Lionel Groulx métro station yesterday. The fire was caused by mechanical problems, police said, and no one was hurt.

(As I mentioned to a concerned fellow traveller yesterday, nobody is seriously injured in these kinds of fires, since they take a while to get this intense and the buses are pretty well designed to be able to get everyone out quickly. Still, spontaneous combustion is a concern.) 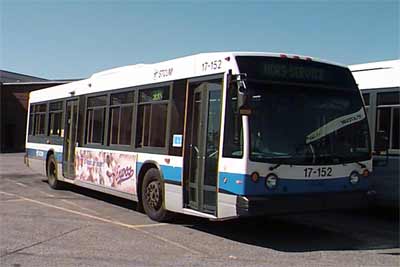 Back in 1996, it was seen as the biggest leap in Montreal transportation in decades. The STCUM was replacing the General Motors … MCI … NovaBus Classic series with a new, revolutionary low-floor (LFS) bus being developed by St-Eustache-based NovaBus. The new buses would be more accessible, both for people with low mobility who would now have one step up instead of four, and people on wheelchairs who would have a ramp at the back door and a place to park their wheelchair safely.

NovaBus wasn’t the only low-floor player, nor were they the best. But they were Quebec-based, which meant it was politically favourable to buy from them and have the buses produced locally, and tax incentives made it much more economical to buy from them.

The problems with the bus began rather quickly. First, there was the minor issue of the brake lines freezing in winter, which caused them to accelerate when the brakes were applied. Then there was their propensity to randomly catch fire. And a host of other problems that mechanics are having to deal with: the wheelchair ramps don’t work (the STM still encourages use of their adapted transit network), the back-door sensor doesn’t work reliably, two seats in the front faced a wall behind the driver (causing clients to hit their heads when the bus came to a sudden stop).

But the STM kept buying the buses. 480 of them over three years. After that, the STM stopped buying buses due to budget constraints, and NovaBus revamped their design. The second-generation LFS buses, which the STM started buying in 2001, solved most of those problems, but there aren’t enough of them on the road to take the first batch (or for that matter, 6-7 years worth of Classics) out of service. So we’re stuck with them.

And the problems keep coming. For the past two days, about 60 of them were taken off the street for various problems, cutting service during rush hours by about 1 per cent. (via mtlweblog) It’s gotten so bad that the STM prefers using the older Classic buses longer than the first-generation LFS, since they’re still working fine.