The Syndicat Canadien de la fonction publique (Canadian Union of Public Employees) has put together a 23-minute video (in French and with English subtitles) about the 15-month lockout of editorial employees (and subsequent strike by press workers) at the Journal de Québec in 2007 and 2008.

As you can imagine, being a union-produced video, it’s hardly detached from the situation and presents a somewhat distorted view. There are no interviews with Quebecor or Journal management (who knows if the SCFP even tried). Talk of the deal that was eventually reached talks of it being a huge victory for the workers, while in reality it was more of a reasonable compromise between the two sides’ demands.

Even though the labour disruption ended in the summer of 2008, the saga is far from over. The union is appealing a court decision that nullified a labour board ruling that the Journal used scabs as subcontractors during the lockout. There’s also a fight over Quebecor Media wanting to add additional Journal de Québec journalists to the National Assembly to make up for the Journal de Montréal journalists currently being locked out.

Looking back at the conflict also serves as a comparison with the current situation at the Journal de Montréal (and Le Réveil, whose 26 locked-out workers want to go back to the table). The chasm between workers and employer in Montreal is even larger than it was in Quebec, although many of the issues are the same.

But the union, and the documentary, are right about one big thing: The MédiaMatinQuébec experiment changed the face of labour disruptions involving journalists, and is serving as a template. The template couldn’t be entirely replicated by the STIJM in Montreal (Montreal already has two free newspapers – one owned by Quebecor – and the territory is larger than Quebec City), but the Rue Frontenac website might not have happened were it not for MMQ.

Unfortunately for the union members, Quebecor also learned from the Journal de Québec lockout. It learned how to get around anti-scab laws, and made sure its Agence QMI was setup so it could take news from other sources and reproduce them in the Journal de Montréal.

If the Journal de Montréal workers end up with a deal similar to what the Journal de Québec workers got, that will probably also be hailed as a huge victory for the union. But who knows how long it will be until that happens. Both Quebecor and the STIJM are prepared for the long haul.

Le Trente also has some discussion about the SCFP’s video.

Got this flyer in the mail today. It’s from Montreal’s blue-collar union (SCFP 301), who are trying to negotiate a new contract with the city (and are staging a one-day strike on Wednesday). They try to gain public sympathy by arguing that union labour is cheaper than outsourcing, and that their salary demands of 2/2.5% per year are not extravagant.

More details from this “exclusive” La Presse piece, and some thoughts from Propos Montréal. 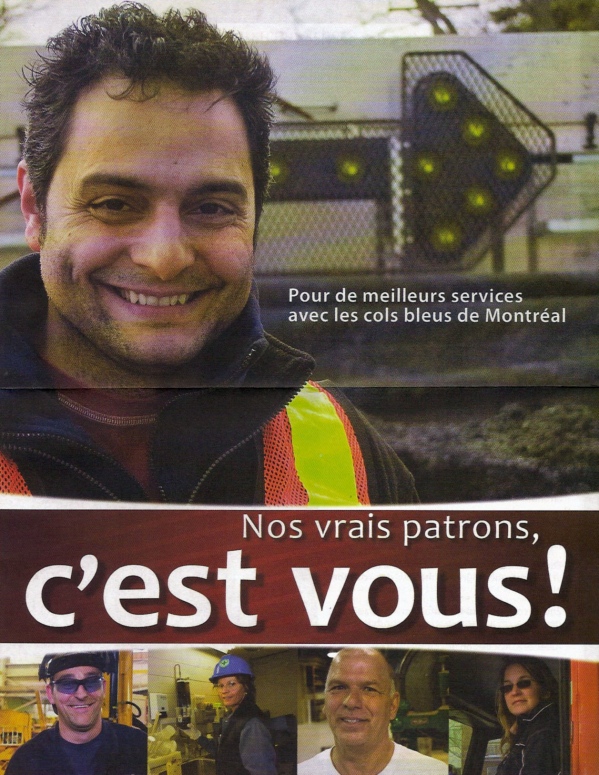