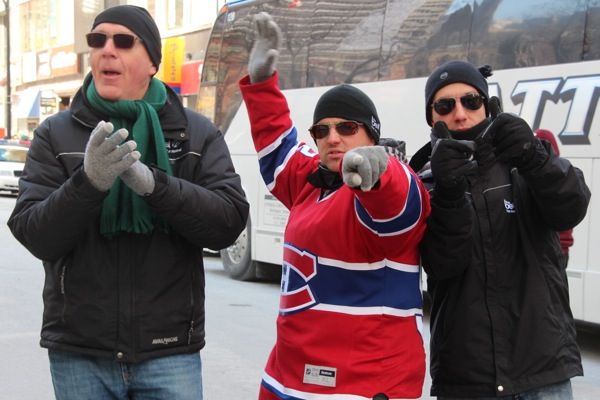 Ken Connors, left, has been promoted to assistant PD, and Shaun McMahon, right, is taking his place on weekends, leaving Vinny Barrucco, centre, with a new partner.

The bromance is over.

A month after appointing Sam Zniber as program director, 92.5 The Beat (CKBE-FM) has made weekend morning man Ken Connors the assistant PD, and has moved Shaun McMahon from the afternoon drive show to weekend mornings to replace him.

McMahon broke the news on Facebook, where he and afternoon drive host “Cousin” Vinny Barrucco had been playing up their “bromance” since they were put together.

“So… the #BROMANCE is on hold for now,” McMahon says.

Sliding into his slot as the afternoon traffic reporter is Kim Kieran, who said on Facebook she was “beyond excited” about the new position. Kieran did traffic at The Beat in the mornings while Natasha Hall was on maternity leave. Here she is reading 50 Shades of Grey.