There’s a debate going on, sparked by Steve Proulx, about whether Montrealers should be directing their donations directly to Haiti relief than by funding a trip by journalists from Rue Frontenac to cover the devastation.

It’s a simple argument, but there are a lot of nuanced points to consider on both sides:

I stopped by Rue Frontenac’s offices this week and had a chat with one of its journalists, Jean-François Codère. He argued that other news media sending journalists to Haiti (and everyone’s doing it – The Gazette, La Presse, TVA, the Globe and Mail, the Toronto Star, CTV, CBC among others) at much expense rather than donating money to relief causes.

Personally, I see both sides. I prefer to give my money to the Red Cross than Rue Frontenac because I think what Haiti is suffering from right now is not a lack of western journalists. But I don’t blame anyone for wanting to put a few bucks toward their plane tickets (their salaries are being paid out of the union’s strike fund). It’s their choice.

In any case, they’ve already got money and are reporting from Haiti. Vincent Larouche has a report and Martin Bouffard has photos and a video. 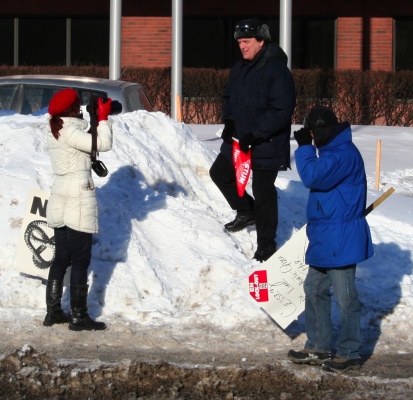 Steve Proulx, who like me has been following the Journal de Montréal lockout closely, is being sued by the paper, apparently for a document he posted to his blog (later deleted) from the STIJM union which was critical of Journal management. (UPDATE: A Facebook group has been setup to support Steve)

Hugo Dumas reveals this in a column which also says the union at TVA is complaining that content its journalists provide to the business network Canal Argent is being used in the Journal and they’re acting as de facto scabs.

Steve Proulx, who is the media columnist and blogger at Voir, is changing his focus to be more generalist, and asking people for suggestions on what he should call his new column.

Although I’m sure this is a good move for Proulx, it’s a bit sad for the world of media criticism. The move reminds me of when Antonia Zerbisias got taken off the media criticism beat at the Toronto Star.

Proulx says he’ll still talk about media (and there’s certainly lots to talk about these days), but when you’re not focused on one subject, you lose some detail.

Media criticism is hard in this environment, because to do it properly you need to be employed as a journalist, but most of the companies who employ journalists are part of giant conglomerates that control dozens of media outlets. You’d be hard-pressed to find someone working full-time as a journalist who isn’t employed by Canwest, Quebecor, CBC, CTVglobemedia, Gesca, Transcontinental, Astral, Corus or Rogers.

There are exceptions. The Toronto Star is one, though TorStar owns part of CTVglobemedia. The Suburban is another, and it has Mike Cohen who writes about anglo Quebec media. Voir, which also owns Hour and Ottawa Xpress, allowed Proulx the freedom to write what he wished without running the risk of pissing off his employer.

And then there’s Le Devoir, where Paul Cauchon will write more about Quebec media than you’ll get anywhere else. But one journalist at Canada’s only remaining independent daily newspaper is hardly enough to cover the giant media landscape.

Let’s hope Proulx doesn’t let the media stories pass him by as he’s focusing on his expanded portfolio. Especially those stories about my employer that I can’t write without getting into trouble.

Steve Proulx’s slow descent into madness continues, as he locks himself in a small room with only a recorder and a webcam to keep him company.