END_OF_DOCUMENT_TOKEN_TO_BE_REPLACED

Canada’s English-language private TV broadcasters announced their fall schedules this week. In case you couldn’t keep up with all the press releases, here’s what was sent out.

END_OF_DOCUMENT_TOKEN_TO_BE_REPLACED 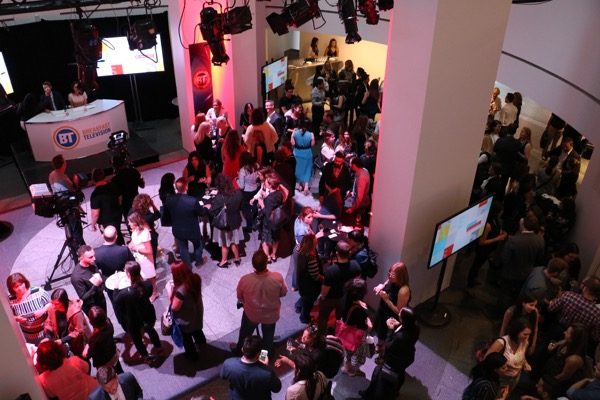 The Rogers Media upfront party in Montreal on June 7.

The beginning of June is a big time for Canadian TV networks. They invite journalists and advertisers to fancy parties and announce what new programming they’re adding to their schedules for the next season. In the case of Canada’s big three English commercial networks, Bell Media (CTV), Shaw/Corus (Global) and Rogers (City), that’s mainly acquired U.S. programming.

They’re called “upfronts”, and their purpose is clear.

But these broadcasters also own news outlets, and it might come as no surprise that the news side, and shows that are news-like in function, tend to cover only their parent company’s upfront presentation, even though they all announce their programming within a week of each other.

CTV’s eTalk has an entire special section on its website devoted to CTV’s upfront, including interviews with Hollywood stars hawking their new shows. CTV Toronto devoted five minutes to a live report. On ctvnews.ca, the network posted a Canadian Press story about Bell’s announcement, but not the CP stories about Shaw/Corus and Rogers.

Global News added plenty of videos to its globalnews.ca website of interviews with big stars during the Corus upfront presentation, but these weren’t journalistic reports. They just dumped raw video from the advertising event on their website. Global News Toronto devoted a bit more than two minutes to a packaged report about Global’s fall lineup (starts at 29:49). ET Canada, of course, focused plenty of attention on Corus’s announcement and none on anyone else. Online, there was a report with a journalist’s byline, but that turned out to be a straight-up copy-paste of Corus’s press release with some light re-wording at the top. It was only after I pointed that out on Twitter that an editor’s note was added to explain that.

Rogers doesn’t have a national news network like CTV and Global, and I couldn’t find anything on CityNews about upfronts. On Rogers’s news radio station websites, there was only Canadian Press stories about the upfront announcements, mostly because those websites republish every Canadian Press story. (An exception was 570 News in Kitchener, which republished a Rogers press release and credited it to “news staff”)

None of this is new, of course. Lots of journalistic outlets downplay or ignore their competitors’ good-news announcements. But the bias is never as stark as it is during upfront week.

We all accept that this happens, but is it ethical?

Last year, Bell Media’s president was fired after he interfered in CTV News’s coverage of a CRTC decision affecting Bell Canada. The message sent was clear: CTV News’s journalistic standards have no exceptions, even when dealing with the parent company.

But are upfronts an exception?

To find out, I asked the heads of CTV News and Global News to comment about their one-sided coverage of upfront announcements.

In both cases, it was noted that the daily entertainment shows (eTalk for CTV and ET Canada for Global) do not fall under the news division, which I find interesting.

We can assure you that at no point does CTV News suspend its journalistic practices under any circumstance. All CTV News staff are trained to follow the strictest editorial guidelines designed to ensure impartiality when making our editorial decisions, which are safeguarded by both the CTV News Policy Handbook and Bell’s Journalistic Independence Policy. These policies are designed to ensure that, at all times, CTV News upholds the highest standard of journalistic independence.

I asked him why, if this is true, did CTV News cover Bell Media’s announcement but not its competitors’. I got no response.

Global News was not invited to our competitors’ upfronts which, like the Corus Upfront, were private events by invitation only. That’s not to say we do not provide coverage of competing networks’ programs and events when they are in the broader public interest. We certainly do, and our archives are filled with many stories about CTV, CBC, Rogers and Netflix.

Our commitment to fairness and balance doesn’t translate into an obligation to cover everything that happens. Editorial integrity doesn’t mean you have to do a story on The Bay because you did one on Sears. Every media outlet makes choices daily about what it will cover and what it will not.

In keeping with our Global News journalistic principles and practices, I can assure you that at no time was our news division or our reporters given any directive on what to cover or how to cover it. Coverage decisions were made by Global News based on audience interest and the accessibility offered to key players in the fall shows.

The point about not being invited to competitors’ upfronts is valid. (Maybe that would change if they covered each other’s announcements more?) But that doesn’t stop news outlets from reporting what’s announced in press releases and posted online.

And while news organizations have been self-promoting since the dawn of time, in an era of vertical integration, it’s not just CTV talking about CTV and Global talking about Global. It’s about CTV News, eTalk and BNN talking about CTV, Space and Discovery Channel, while Global News and ET Canada talk about Global, Showcase and Food Network, and Breakfast Television talks about City, Viceland and Sportsnet.

And those independent broadcasters not owned by the big media companies? Don’t expect to hear about your programming on the evening news, because they’re only in the business of serving their viewers.

It’s nice that no official orders were given from on high to manipulate news coverage. But if you’re a journalist at one of these organizations, how much freedom do you really have to choose not to cover your parent company’s press event, or to cover your competitor’s?

I certainly wouldn’t want to test it.