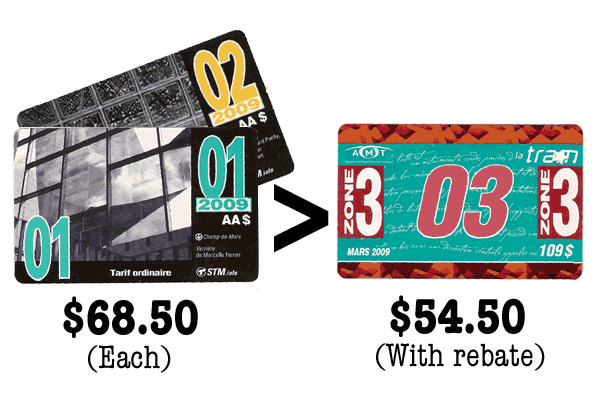 Today, as the Agence métropolitaine de transport handed out its rebate “compensation” coupons, I decided to put my game-the-system idea to the test. And it worked flawlessly.

You’ll recall I pointed out that the AMT “compensation” system was billed as a refund but wasn’t being organized in that way. Instead of asking people for their January passes and giving people half-refunds based on those passes (as the STM did in 2007), the AMT has instead discounted the price of its March, April and May monthly passes for anyone who can procure a coupon.

Normally, AMT multi-zone TRAM passes are more expensive than passes from individual transit agencies for obvious, logical reasons. But with this 50% rebate, that math is broken, and it’s cheaper to get a discounted AMT pass (which allows access to the entire STM network) than a regular STM-only pass.

The AMT’s way of controlling who got rebates was particularly stupid: Hand out coupons at train stations and assume that anyone there regularly takes that train and is entitled to a refund. 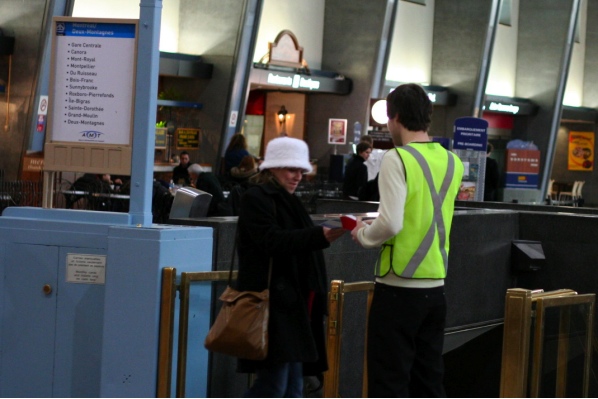 And that’s what I did.

At the Lucien L’Allier station, it was similarly easy to procure a coupon. Only the one there was red. As far as I can tell, the only differences between the two coupons were the colour and the name of the line. Both were for 50% discounts for March, so I’m not quite sure why they bothered.

Just to be sure I wasn’t breaking any laws or anything, I read the fine print: 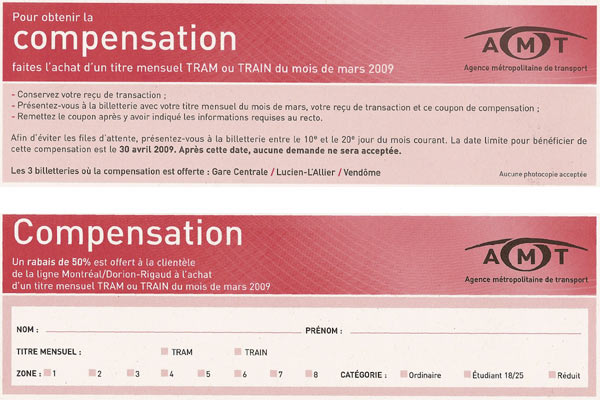 AMT Dorion/Rigaud coupon front and back

Well, that’s interesting. There really isn’t much fine print, other than a prohibition against using photocopies. Most of one side is instructions on how to get the rebate, and the other side is a simple form.

I filled it out while I was waiting in line. Even though it was only the 24th of the month, and 2:30 p.m., the line was pretty long:

When I got to buy my pass, I noticed two anti-fraud measures being used, though neither stopped me from saving on my pass. The first is that the serial number of the pass is written onto the coupon. This would be useful if any verification was made to the name on the coupon, but it isn’t. I could have put Patrick Lagacé’s name on there and they wouldn’t have known the difference. The second is that the pass given out has a star-shaped hole punched out of it, to denote the fact that it was sold with the rebate. This prevents someone from using the pass to try to get the second half of the rebate after the fact. (The procedure is obviously different for those using Opus.)

Though I could have checked the TRAM 1 box and gotten a pass for only $39.75, I decided I wouldn’t go that far. Instead, I opted for the TRAM 3 pass, which would not only allow me to take the train to the West Island, but use the Laval and Longueuil transit networks as well. It was only $15 more expensive than the TRAM 1, and still $14 cheaper than what I would have paid for an STM pass.

So next month I’ll do some travelling to Laval and Longueuil and see what’s going on over there.

Either way, mission accomplished. Any ideas what I should do with that extra $14?

The last day of coupon distribution is Thursday. The schedule is as follows:

Discounted passes are on sale only at Lucien L’Allier, Central Station and Vendôme.  You can also buy passes or charge up Opus cards at the full fare and then bring your pass or receipt with the coupon to these stations after the fact to get a refund.

UPDATE (Feb. 26): The AMT is extending hours of its service centres to handle rebate requests, including being open Saturdays and Sundays. This won’t add chances to get coupons, but will make it a bit easier to get refunds once you have them.

UPDATE (Feb. 27): The Gazette’s Andy Riga reports that the AMT has given away more tickets than the two train lines have regular users. He theorizes this could be because of three reasons: