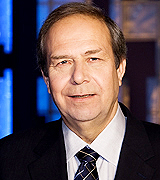 The news hit insiders this morning, and the press release was issued just after the end of business: CFCF (aka CTV Montreal) is cancelling its 6am morning newscast, effective immediately, and replacing it with another half hour of its national morning program Canada AM. (Previously, CFCF would cut into Canada AM after the first half hour.) They’ve already updated their weekly schedule to reflect the change.

The decision, which is being made to cut costs, will mean the cutting of four positions (one of which is already vacant). Herb Luft, who has been anchoring the morning newscast since it started in March 2000, will return to general assignment reporting.

CFCF’s license requires a minimum of 15.5 hours a week of local programming. Since the cancellation of Entertainment Spotlight and SportsNight 360 in January, this has been entirely made up of local newscasts (and the late sportscast at 11:45). The cancellation of the half-hour weekday newscast drops CFCF’s local programming hours from 18.5 to about 16 hours a week with a one-hour weekday noon newscast, one-hour daily evening newscast and 35-minute daily late newscast.

It also means that there is now no morning local news from any of Montreal’s anglophone television stations. Global Quebec cancelled This Morning Live last year and replaced it with a repeat of the previous night’s News Final. CBC Montreal airs a national morning news program.

First News, as it was officially called, was also the last local morning newscast in the CTV network. All the other stations ran all three hours of Canada AM from 6 to 9am.

UPDATE: The Gazette has a brief about it (that’s open to comments), which pretty much repeats everything already in this post. Evening anchor Todd van der Heyden mentioned the cancellation in the middle of the evening newscast (the website has a brief about it as well), pointing out that even with this reduction CFCF has more local news than its competitors.