Well, another 15 minutes in the bank.

As long-time readers know, April Fool’s Day is a holiday for me. Like Christmas, it’s anticipated gleefully. I spend weeks looking forward to it and hours preparing a series of fake blog posts that go up throughout the morning of April 1.

That clever story about Le Devoir charging for tweets? Not a peep. Bupkis. Gesca buying Rue Frontenac? Not nearly as much reaction to that as to last year’s Rue Frontenac scoop. A late-morning story about CTV’s mascot entering rehab (complete with a digitally edited photo of bags of jellybeans on an evidence table) apparently caused a few chuckles within the station but didn’t get traction elsewhere. CKAC’s decision to stop airing Habs games to add more Habs analysis didn’t fool many but did get a few laughs from Sportnographe and others who think the station talks a bit too much about Canadiens line combinations.

How to manipulate the media

This is the first time April Fool’s Day has come during an election campaign here since (checking Wikipedia…) the 2003 provincial election, long before this blog or Twitter existed.

It wasn’t a conscious decision to focus on the election. It just happened to be in the news, and I happened to notice that the Liberal candidates are using these QR codes on their posters so tech-savvy constituents can easily find out more about them.

I chose Trudeau as my victim simply because I live in his riding, and his poster is outside. The fact that it’s a young, popular, tech-savvy candidate is kind of icing on the cake.

I didn’t spend much time writing it up. You’ve heard this story countless times before: Someone makes a typo in an address or a phone number, and that address or number leads to something involving pornography or sex. (Typos like this are common, but they’re not news unless they involve some funny contrast between what it’s supposed to be and what it is.)

I spent some time thinking about what the best typo would be. I finally settled on changing “Liberal.ca” to “Luberal.ca”, even though Trudeau’s website is “justin.ca”. I grumbled when I realized through a tweet later that “lustin.ca” would have been awesome. Though I didn’t link to anything, I checked to see what, if any, website was at “luberal.ca” and found it hadn’t even been registered. Eventually, as my blog post accumulated traffic, someone registered the domain and pointed it to an interesting – and relevant – place (safe for work, unless the redirect changes).

The story probably wouldn’t have resulted in much – maybe a few fooled Fagstein readers and a few chuckles. But two things happened:

1. Justin Trudeau himself was sent a link to the story by someone, and for a moment thought it might be real (he later said he called his office in a panic, only to learn the mass sign repair I wrote about wasn’t happening).

2. After learning he had been fooled, Trudeau decided to play along, tweeting the story to his 60,000 followers with a note saying “we’re working on it”. That was retweeted by 87 people, including me.

That little tweet caused the story to take on a life of its own. About 2,000 clicks in the hour after the tweet, now about 4,500, not including these 777 or others who didn’t use bit.ly shortened links. Dozens of tweets with comments (some questioning early on if it was an April Fool’s joke). Many fell for it right away, laughing at the incompetence of Liberal campaign staffers.

At the end of the day, the page got about 12,000 visits, which totally obliterates any previous record for a single blog post on this site. (I only wish such a record is surpassed by, you know, some actual journalism I may someday choose to do.)

Looking at referring pages, the biggest by far (not including Facebook, Twitter and Google) was this post on SmallDeadAnimals.com (about 2,000 clicks), with the CBC a distant second at about 300. 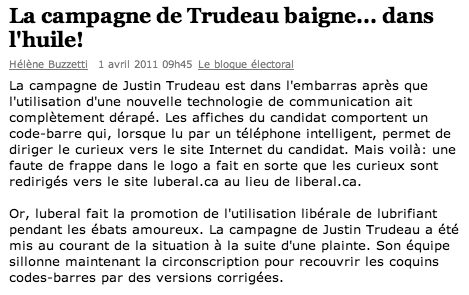 Among those to be fooled was Le Devoir, where the story was posted as fact on its election blog (without, I might add, citing me as its source – a lesson to always cite sources to cover your ass). The blog post was subsequently deleted rather than corrected (another journalistic error on Le Devoir’s part, I think), though you can find evidence of it here and an apologetic tweet from the reporter here.

I might have sympathy for Le Devoir, except that in addition to not citing its source, the paper was well aware that it was April Fool’s Day. It published an “exclusive” about how the Quebec government was planning to bury its wind turbines to cut down on visual pollution. Editor-in-chief Josée Boileau tweeted a link to Le Devoir’s Trudeau blog piece, saying “et c’est pas un poisson d’avril!” … only to find out minutes later that, actually, it was a poisson d’avril. And apparently a really funny one at that.

Trudeau himself let everyone in on the gag on Twitter, explaining that he had at first been fooled and called his office in a panic.

It was perhaps the revelation about this phone call that caused the story to jump from April Fool’s gag to election story.

During elections, everything is news

Look ma, I was on Page 8 of the Journal de Montréal!

One thing I hadn’t considered in writing this blog post is how desperate the news media are for election-related stories. News organizations have reporters on each of the four big campaign buses, plus people writing about the campaign as a whole. There are election websites hungry for news, and lots of blogs where little stories from the campaign trail are posted regularly.

As it turns out, a story about a big-name candidate falling victim to an April Fool’s joke is one of these little stories. Combined with a relatively slow-news Friday and the fact that April Fool’s Day itself was in the news, and suddenly it’s getting a lot more attention than it’s worth:

and Trudeau posted the blog post on his Facebook page, prompting a flurry of comments and likes.

I also got a couple of interview requests from local radio stations. I went into studio to talk to Homerun’s Sue Smith, and recorded an interview with CJAD’s Dan Delmar that aired while I was working. Both shows also talked to Trudeau, though I didn’t get a chance on either to talk directly with him.

So what did I get out of this?

I didn’t profit financially from this craziness, and any fame was fleeting at best. In the end, I got to have a lot of fun watching the story get propagated (both before and after everyone realized it was false), and I hope I’ve convinced at least a couple of journalists that it’s better to check your facts before you republish stuff you found on the Internet. 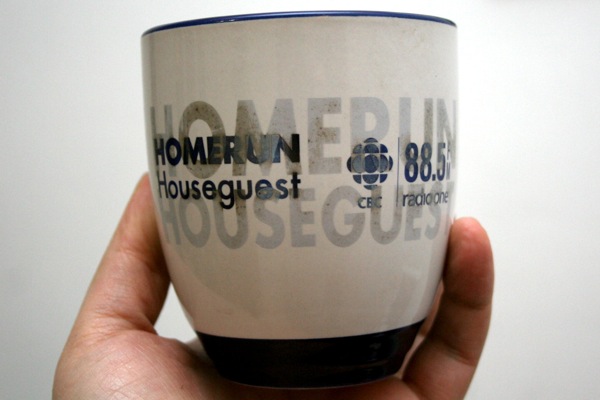 Homerun Houseguest mug given to me after my interview

Oh, and Homerun gave me a mug after I appeared on their show. (There are advantages to making the trek to the studio, besides clearer audio and stumbling on the sight of Paul Larocque and Anne-Marie Dussault discussing their moderation of the upcoming leaders’ debate.)

I couldn’t help noticing the marking on the bottom of this mug from Canada’s national broadcaster: 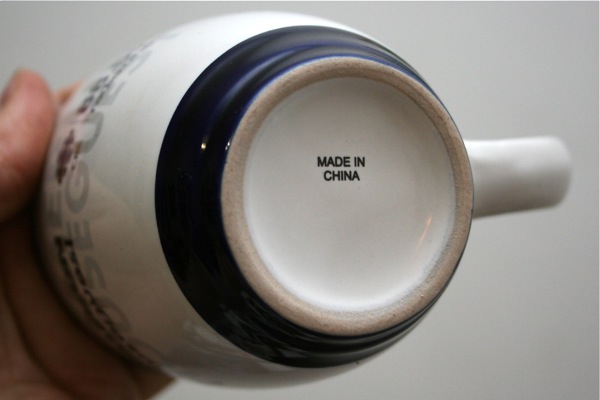 CBC outsources to China! This would make a great story for Sun News!

So yeah, it was fun.

Ironically, despite all the brouhaha, I’ve yet to either meet or speak with Justin Trudeau himself for the first time, even though I’ve listened to him having a conversation about something I’ve done and approved a comment he left on my blog.

When I meet Trudeau for the first time, I’ll have an interesting way of introducing myself.

6 thoughts on “Justin Trudeau is a good sport”