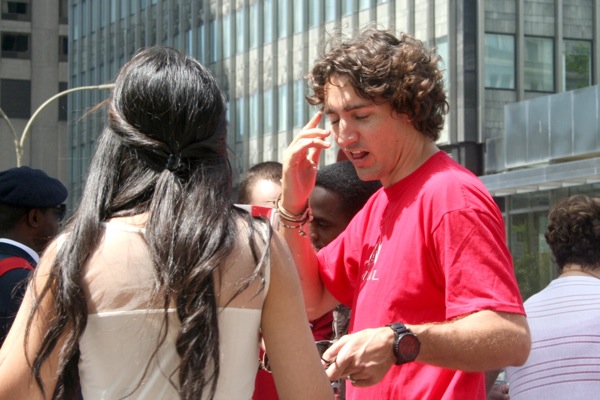 One of the advantages of living where I do is that I happen to be in the Papineau federal riding. It’s apparently the smallest geographically in Canada because of its high residential density.

But more importantly, it’s the riding currently being represented by Justin Trudeau, Liberal Party superstar and the closest thing this country has to a political prince, making him an easy target for harmless fun.

Being a constituent apparently gets me one free calendar every year. This year’s came last week in my mailbox – almost four weeks into the year, far beyond the point when calendars in stores enter liquidation pricing. I don’t know if it’s a party expenditure (since it has the Liberal Party logo on it) or if it comes from his MP’s budget (since it has his parliamentary contact information on the back).

What I do know is that, like last year’s calendar (this is apparently his third), it’s filled with pictures of Trudeau, in most cases more than one on each page. As you can see in the video above, I count 33 pictures of Trudeau in his calendar, which is the same as I counted in last year’s. Some photos are captioned as “Justin”, others “Mr. Trudeau”, others are written in the first person, and the rest don’t have a subject.

But that’s not interesting. Nor is it interesting that his welcome message spends more time bashing the Conservatives than talking about his family. What’s interesting is that someone thought it didn’t look silly that a calendar with 12 months has 33 pictures of Justin Trudeau in it, and a year later decided that shouldn’t change.

Well, another 15 minutes in the bank.

As long-time readers know, April Fool’s Day is a holiday for me. Like Christmas, it’s anticipated gleefully. I spend weeks looking forward to it and hours preparing a series of fake blog posts that go up throughout the morning of April 1.

That clever story about Le Devoir charging for tweets? Not a peep. Bupkis. Gesca buying Rue Frontenac? Not nearly as much reaction to that as to last year’s Rue Frontenac scoop. A late-morning story about CTV’s mascot entering rehab (complete with a digitally edited photo of bags of jellybeans on an evidence table) apparently caused a few chuckles within the station but didn’t get traction elsewhere. CKAC’s decision to stop airing Habs games to add more Habs analysis didn’t fool many but did get a few laughs from Sportnographe and others who think the station talks a bit too much about Canadiens line combinations.

END_OF_DOCUMENT_TOKEN_TO_BE_REPLACED

(or, at least, those who hear about a website in the morning and make a note to visit a half hour later)

In case you missed it, I was invited by CBC Daybreak to come in and give them an analysis of blog coverage of the federal election campaign (my super-secret project). I was originally supposed to go on yesterday, but with the debate going long I was bumped to today.

Unfortunately, in the first time in months (years?) that I’ve taken a metro train during morning rush hour, I experienced four separate delays (one of which had me stuck in the tunnel). I practically had a heart attack, knowing full well that radio deadlines aren’t flexible by even a second.

I gave up at Laurier metro as the lights went out in the train, and hurried outside to let the producer know I wasn’t there. They quickly decided to do the interview by (pay)phone. (One thing payphones still have over cellphones is that, because they don’t have to compress their data into compact wireless streams, the sound is much clearer and more radio-friendly. Not as good as in-studio, but desperate times…)

As I told host Mike Finnerty, I don’t blame the STM for the delays, which were due in part to technical problems and because of the traffic tie-ups those problems create. But I wasn’t thrilled with the transit corporation this morning, that’s for sure. (And, of course, the trip back home was entirely uneventful)

Anyway, we talked about this blog (it’s really a place for any opinions I like to give on anything, though I focus specifically on the media, public transit, stuff going on in the news, blogs, and of course myself. You can also read what I’ve written about the federal election so far.

We also got into the meat of the matter (though six minutes goes by so fast when you’re talking about stuff), discussing blogosphere reaction to Elizabeth May in the debates, as well as a video by Justin Trudeau (and the parody of that video by Prenez Garde Aux Chiens, whose season premiere is tonight at 10pm on Canal Vox) that has been making the rounds in the blogosphere recently.

I’ll try to get a clip of the segment up soon.

Yves Williams has a YouTube video of Infoman Jean-René Dufort saying we need to destroy Facebook. As if it somehow furthers that point, he created a profile for wanted murderer Sylvain Vincent and got Justin Trudeau to add him as a friend.

I guess we shouldn’t take Mr. Dufort too seriously, since his Facebook profile has almost 100 “friends” as well.