You may have seen the story: TVA Nouvelles deleted a Facebook post pointing to a story about a house fire in Halifax that killed seven children (who happened to be from a Syrian family) because it received several unacceptable comments that appeared to make light of or even celebrate their deaths. Media personality Alexandre Champagne compiled some of those comments in a widely shared screenshot.

TVA Nouvelles posted another post and apologized, saying it would try to police its social media better next time.

I posted a link to the apology on Twitter and it got retweeted a bit, prompting a lot of discussion. I was interviewed for a CityNews story about it, during which I tried to say that a few comments on a Facebook page provides a skewed impression of the views of the audience — and larger population — as a whole.

Through the various discussions, I’ve seen a lot of statements that I feel are missing key context, so I’d like to try to add some of that here.

END_OF_DOCUMENT_TOKEN_TO_BE_REPLACED

Concordia University announced today that it will, effective Monday, unblock access to Facebook from its wired network.

Concordia blocked access to Facebook in September – but intentionally left it open on its wireless network, in residences and in its libraries – out of concerns for “spam, viruses and leaks of confidential information related to use of the social networking site.”

This line of reasoning was criticized – even mocked – by Internet experts like Michael Geist, who argued none of these things are specific to Facebook.

It also led to coverage in the media: CBC, Gazette, McGill Daily and others.

So what changed? Officially, it was reopened because of improved security:

After the recent improvement of certain security checks and procedures at Concordia, including the installation of a new firewall, the university made the decision to officially reinstate Facebook.

But realistically, the growth of Facebook has meant the loss of productivity from its use (my guess for the real reason behind its original blocking) is outweighed by its value as a communications tool – between students and professors, between the university and its alumni, between sports teams and their fans.

Concordia reminds its network users to use best practices for safeguarding personal information and passwords.

The translation was done with the help of Facebook users in Quebec, I guess because Facebook is too cheap to hire a real translator for a week to make sure they get it right. These crowdsourced translations caused problems last time, but I don’t notice any glaring errors so far.

Don’t you adminstrator remember that we are the one using facebook ??

I suppose, to be fair, I should add this one to the previous one. 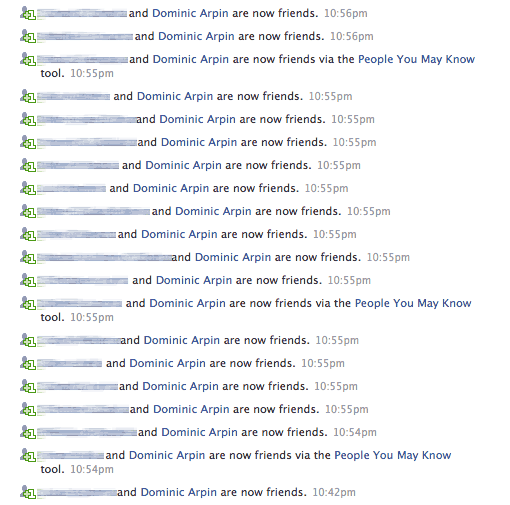 This one is from a few days ago. 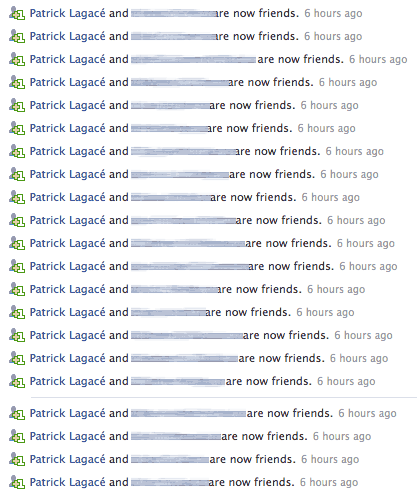 So apparently some intern law students have filed a complaint against Facebook for having the audacity to allow people to share their personal information with others.

Facebook certainly has privacy issues, as I’ve previously explored, and there’s no doubt that they’re trying to exploit this information for all it’s worth.

But the fact remains that, as Facebook points out, all this information is shared voluntarily. If you don’t want people to know your religion, don’t publicize it online.

The Facebook problem is a problem of user education, not Big Evil Corporations. People need to learn that as the Internet becomes more efficient at connecting and compiling information, they can’t rely on privacy through obscurity anymore. We must assume that anything we type into our computer and send over the Internet will eventually be plastered on a billboard for our parents, employers and ex-girlfriends to see and mock. And we must be vigilant about keeping our private information private. No matter how fun it might seem to break that rule just once.

I was all excited when I saw a post from TQS’s Jean-Michel Vanasse praising a rival network’s coverage. Finally, I thought, we’re starting to see the pointless war between networks start to mellow.

Unfortunately, he was being sarcastic. Pointing out that a recent EXCLUSIVE SPECIAL REPORT OMG from another network (he doesn’t name it, and a quick search doesn’t find it online it’s TVA’s J.E., and the video is online) copies one he did in October.

The amazingly important issue? That lots of Facebook users will accept people they don’t know as friends.

I know. Get that Pulitzer engraving pen ready, folks.

What’s hilarious about all this is that Vanasse himself was scooped by Jean-René Dufort’s Infoman, who set up a profile for a wanted murderer and got politicians and celebrities to befriend him a month earlier.

Not only did the Infoman report come out before the others, it’s a whole lot funnier and more interesting.

This morning’s paper features a big story by yours truly on the issue of privacy on Facebook.

Specifically, it talks about Montrealer Steven Mansour, who last summer found out that in order to delete his Facebook account he would have to first delete every wall post, comment, photo, note, everything he had ever done since he first registered his account. One at a time. It took him 2,504 steps. He’s not crazy about having to go through all that effort.

The same issue annoyed UK blogger Alan Burlison and others, but Facebook wouldn’t budge until the New York Times took it up last month. That led to the company proclaiming it would be easier, without making clear exactly what it was changing about the process.

Currently, on Facebook, you can “deactivate” accounts, which makes them inaccessible (though reports of fragments being left behind are common). But deleting them completely requires an outside-the-box email exchange with Facebook staff.

Neither did Canada’s Privacy Commissioner’s Office, when I asked whether it had received a complaint from Mansour and/or were investigating Facebook. The office’s PR contact got back to me finally, and says he’s looking into whether there are any investigations concerning Facebook.

Mansour has a roundup on his blog of reaction to his story and other Facebook privacy issues. Only some involve conspiracy theories about links to the CIA and stuff.

The article also touches on TRUSTe, an organization that counts Facebook as a member and seems to do nothing to rein them in; Facebook’s draconian terms of use; and what Mansour thinks needs to be done to safeguard privacy rights online.

Among the victims of this non-financial identity theft are members of our Montreal Canadiens, very few of whom actually have legitimate Facebook accounts. There are dozens of fake Saku Koivus, Alex Kovalevs and Andrei Kostitsyns around.

So it’s hard to say whether the following fan pages are official or not. They probably aren’t. But at least there’s one per player, so we can consolidate.

There are some obvious missing ones (the Kostitsyns, Markov, Tom the Bomb Nonstopoulos), but it’s enough to validate your existence by expressing your fandom electronically, the way fandom is meant to be expressed.

I just got alerted to this OMG EXCLUSIVE OMG story at Branchez-Vous, which claims that 1 in 4 francophone Quebecers over 18 is on Facebook, and that number goes up to 54% when you limit it to adults 18-24.

Those numbers seemed suspiciously high to me, especially since before this week Facebook was an English website and therefore its reach in Quebec was lower than the rest of Canada.

Then I came across this:

So this was an online survey. Not only does that outright dismiss the non-trivial (albeit dwindling) portion of Quebecers without regular Internet access, but online surveys are notoriously unreliable. More importantly, it wouldn’t take a rocket scientist to conclude that those willing to take online surveys are more likely to have the kind of free time to waste online that would make them more likely to be members of Facebook in the first place.

So take those results with a grain of salt.

Or maybe it’s just journalists, with column inches to fill, who take notice. And their editors, desperate to show that they’re hip to this Internet thing, encourage them.

So in that spirit, here are some local-interest Facebook outrage groups. Look for stories about them in your local newspaper soon:

The local media have been all over plagiarizing The Gazette reporting on a Facebook group that advocates renaming the Lionel-Groulx metro station after Oscar Peterson. Groulx was a racist, the suggestion goes, and Peterson would be much more befitting of a metro station name.

The group has exploded in popularity, due to both the media coverage and regular word-of-mouth. It has over 1,000 members now.

The idea isn’t new, actually. It’s been going around for quite some time. Other proposed new names for Lionel-Groulx include Yitzhak-Rabin and Gabrielle-Roy.

Unfortunately, it’s somewhat of a non-starter for two reasons:

And that doesn’t get into the whole mess about renaming something from a francophone name to an anglophone one.

Personally, I think it should be renamed The-Jackal.

UPDATE (Feb. 28): The inevitable backlash group has already been formed.

UPDATE: Elsewhere in the blogosphere: