Cogeco’s CRTC application to bring two Montreal AM radio stations back to life has prompted interventions from the owners of the other AM stations in the city – Astral (which owns CJAD) and Bell Media (which owns CKGM/The Team 990) – as well as Paul Tietolman, who has been trying for some time to start up his own AM station at 940 kHz.

The interventions (two are opposed to the application, while Astral is negative but not quite so categorical) are based on these main points, which have been responded to by Cogeco:

Here’s where the intervention from Bell gets interesting: They state that they have been trying, since Corus shut down CINW (940 Hits) and CINF (Info 690) in January 2010, to purchase the transmitter and antenna from them, to no avail. Bell says that if the CRTC wants to approve this application, it would be prepared to perform a frequency swap, taking either 690 or 940 kHz and taking up a clear channel that allows them to broadcast 50,000 watts day and night. 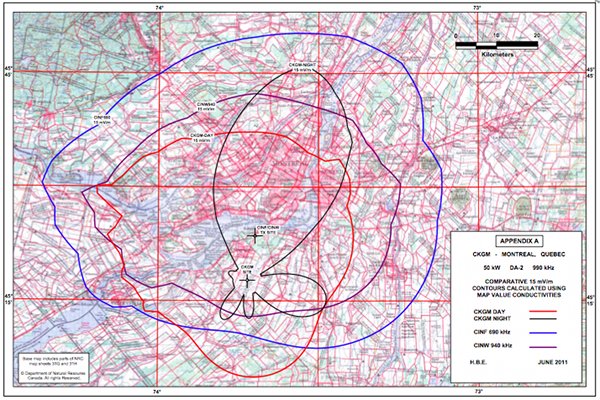 Propagation patterns for CKGM (Team 990AM) in red (day) and black (night) vs. CINW (940AM) in purple and CINF (690AM) in blue, as provided in Bell's CRTC intervention

As Team 990 gains broadcast rights to Canadiens games in the fall, nighttime propagation becomes more important. As a Class B frequency, 990 requires the transmitter to modify its signal at night, reducing its coverage. Switching to 940 would give CKGM a much larger coverage area.

The idea makes a lot of sense. Montreal sports teams – and the Canadiens in particular – are going to have a lot more interest in the outlying regions than Montreal traffic information. It makes sense for that station to have a larger coverage area. And, of course, most people interested in traffic will listen to the radio in their cars, which should not have trouble picking up a giant transmitter just a few kilometres away.

But Cogeco responds by criticizing Bell’s suggestion that it would have been too expensive to retune its existing transmitter and antenna from 990 to 940 kHz. It quotes an engineering expert it hired that said in the worst case scenario of having to replace everything, it would cost less than $250,000.

Tietolman Tétrault, in its intervention (PDF), suggested the stations use frequencies of 600 and 850 kHz (formerly of CIQC and CKVL, respectively) and said the 690 and 940 frequencies should be open to applications. It said it would be willing to apply for both:

Tietolman, whose family once owned CKVL, had tried to offer a competing $81-million bid for Corus Quebec, including 690 and 940. They’ve indicated for a while now that they’d like to bring back 690 and 940, though they haven’t said what kind of format the stations would have.

A few other smaller groups and individuals also filed interventions in this application.

Jacques Blais of S.O.S. Québec Radio filed a handwritten note (PDF) – he wrote that he had computer problems – in which he called the project useless and a waste of public money, and appealed to common sense in rejecting it. He also repeated that 50,000 watts was too much for this station, and said the 690 and 940 frequencies should be reserved for French-language stations only, because the French language is threatened in Quebec.

That last part is kind of funny because his supporting documentation was my previous blog post and an article from The Suburban.

Marc St-Hilaire of the Syndicat général de la radio union said (PDF) endorsed the new station but said it was worried that Cogeco would deduct the number of people it hires for these stations from its commitment to hire journalists for its Cogeco Nouvelles news agency. Cogeco made the commitment as part of the deal that got it to own three francophone FM stations in Montreal.

Chantale Larouche of its parent union the FNC expressed similar thoughts in a separate intervention (PDF).

Cogeco says each station would have six full-time announcers, plus a full-time traffic journalist, and that these would be in addition to the commitments they already made for the creation of Cogeco Nouvelles and the hiring of journalists.

You can read the interventions here:

The hearing to discuss Cogeco’s application was supposed to happen next Monday, but the CRTC announced last week that the items have been withdrawn from the agenda and will return as part of a later hearing. No explanation was given and no date has been set yet.

UPDATE: An open call has been issued for the two frequencies, with a deadline of Aug. 29. Cogeco maintains it still wants to setup all-traffic radio stations and will go through this process if necessary.