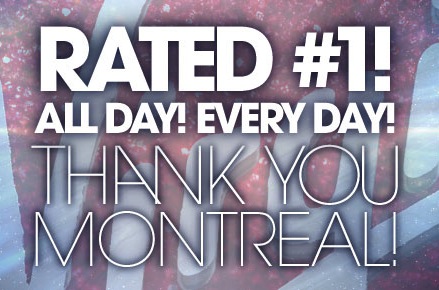 Fall ratings for markets including Montreal came out on Thursday, and like they usually do, they showed nothing earth-shattering. Everything is pretty well where you expect them to be.

For the past few quarters, after the ratings report comes out, both Virgin Radio and The Beat make a big deal about how they did better than the other. This time, it was just Virgin crowing. And with good reason: by almost every metric, they have more listeners than their competitor.

Of course, with only five commercial stations, the English-language market in Montreal has plenty to go around. In any other large market, a 15% share would be enough to send champagne corks popping. But here, that’s fourth place out of five.

Ratings period is always a penis-measuring contest, so let’s go ahead and whip ’em out.

In March, The Beat got some great news with the BBM numbers showing it beat Virgin among anglophones. But even then that news had to be taken with several grains of salt. Adding francophone listeners still put Virgin on top, Virgin was still winning in the sweet spot demographic of adults 25-54, and CJAD was still No. 1 in the one major metric that showed The Beat ahead. In this latest report, Virgin is back on top among the 2+ anglo audience, leaving The Beat with few ways to claim a No. 1 spot.

Looking at the 2+ audience is inclusive and has the benefit of having numbers published directly from BBM. But of course, advertisers don’t want overall listeners. They want the ones who spend the most money, and that tends to be women in their 30s. Or maybe it’s men in their 20s. Play enough with the demographic numbers and everyone’s a winner.

The Beat says it’s still top in its core demographic of women 35-44. But otherwise, just about everything is coming up Virgin:

I spoke on Thursday with the program directors of the five commercial radio stations, and you could tell even by just the tone of their voices that this was a better book for Virgin than it was for The Beat, though The Beat still had some good points going for them. Bell Media even arranged ahead of time for me to talk to Virgin program director Mark Bergman and CHOM’s André Lallier.

Despite how not-terribly-earth-shattering the numbers are, we can see a few highlights worth noting:

The Beat is losing ground among young listeners. For 18-34-year-olds, the share has dropped from 27% last winter to 21% this fall, while Virgin has remained stable around 40% and CHOM around 25%. The Beat has dropped to third place in this demo from second. Just as worrisome, its audience drop seems more pronounced among women than men.

The morning show remains in fourth place, and the once razor-thin margin between those four is starting to expand, with Virgin in the lead. Late mornings has seen a considerable drop, from 12,240 average listeners 25-54, which was enough for first place, to 9,220, down to third and a drop of 25%. Lunch hour and early afternoons have also been dropping steadily. The Beat has lost its lead as the at-work station.

Other time periods have also dropped, with the exception of a slight increase on weekends.

“We’re a little up from last year, which is nice, but a little on the flat side,” Beat program director Leo Da Estrela told me. “We’re up 200,000 (weekly) listeners from 1.3 to 1.5 million,” he added, though Virgin is at 2 million. He didn’t pretend as though his station was winning the race, but he did accentuate the positive that his station is continuing to improve.

I asked him what he needs to do to close the gap with his main competitor. He said the key is “getting into the younger demo” and expanding beyond the 35-44 that The Beat has captured. “We have to get into 25-34 demos a little bigger.”

But don’t expect a big change of strategy. “We’re going to continue doing what we’re doing, and we keep making inroads,” he said. “For us it’s about maintaining the course and getting the word out.”

The Beat has done plenty of things to spice things up. It hired a stunt man to join the morning show and has brought back the Million Dollar Snowfall contest for a second year.

And it’s revamping its daytime schedule, cutting Donna Saker’s shift to just mornings and putting CJ in the early afternoon slot. Da Estrela said the long-term plan was never for Saker’s on-air shift to be so long and he felt CJ had performed well as a fill-in host and deserved her own show.

The afternoon drive show had a great book. Since Mark Bergman hired himself to do fill this slot in April, it’s up 17% among adults 25-54 and is now the top-rated show overall in that demographic. The station is also number one at every major time period in that demographic.

Demographically, it’s also doing fine, being No. 1 in the major ones except men, where it’s No. 2 behind CHOM.

“We’re continuing to open the gap,” program director Mark Bergman said, noting that among adults 18-34 they have double the audience of The Beat. “I would say that’s a pretty good performance.”

Asked if there are any changes on the immediate horizon, Bergman responded simply: “Why change something that’s working?”

Bergman noted that the station will be once again presenting its picks for the top songs of the year, the “Big 96” of 2013, starting on Christmas Day at 10am.

CHOM’s ratings are pretty stable, with a slight increase in the morning and on weekends, and a bit of a drop during late mornings.

“We actually had our best PPM book, our best book ever,” program director André Lallier said. They have a 26.7% share among adults 18-54, and first among men in every demographic, he said.

CHOM’s schedule has changed very little in the past year, and really since Terry DiMonte came back. One notable change, though, has been the absence of Tootall from his daily shifts since the summer. After feeling weak back in June, he had a pacemaker installed in August and has been off of work. Lallier said Tootall is “doing great” but no date has been set for his return.

In the meantime, CHOM added blast-from-the-past Paul Beauregard as a fill-in host, taking over for Rob Kemp and Sharon Hyland, who have in turn been filling in for Tootall.

Lallier also added that CHOM is going to be rebranding slightly next week, refreshing its logo and branding.

CJAD’s ratings are also fairly stable, though there was a noticeable drop for Tommy Schnurmacher’s show. The station continues to have the largest listening share among all audiences, and the top four most listened-to programs among anglophones (in order: The Andrew Carter Show, The Home Improvement Show with Jon Eakes, the CJAD Trivia Show, Dave’s World)

Chris Bury, who is program director for both CJAD and TSN 690, said Andrew Carter is holding his No. 1 position in mornings among overall 2+ audience and tied among adults 25-54. Aaron Rand’s afternoon show has continued to show steady gains, and midday shows are stable despite the departure of Ric Peterson.

Among all audiences, though, Rand’s show is flat compared to spring, and Barry Morgan has an audience 14% smaller than Peterson had in early afternoons.

Asked about upcoming changes, Bury said some stuff is in the works for January (though nothing that would involve major staff changes). Among them is a “music-based interview show” in which “high-profile Montrealers and well-known musicians give us some of their favourite music and songs.”

No changes of note in the ratings for Montreal’s sports station. Bury said its ratings are “stable” — including in the mornings, despite Ted Bird being fired and replaced with Rick Moffat. Abe Hefter was also brought in from CJAD to do the weekend morning show.

But TSN’s ratings are low enough that it’s hard to tell if any changes are due to changing habits or statistical error. None of its shows rank among the top 40 shows overall, and Melnick in the Afternoon just squeezes into it when it’s limited to men.

The sports station, which now has a guaranteed future with the Bell/Astral acquisition and the promise to keep its format for seven years, has worked on adding new features, what Bury calls “appointments”. Things like the “Habs Breakfast” segment at 7:10am and 8:10am and the Shot Clock segment at 6:50am.

“We also stay local in the evenings,” he said, with local programming on nights when the Canadiens aren’t playing.

And they’ve added more live sports on weekends, up to two Premier League soccer games on Saturdays and three NFL games back to back on Sundays.

For the following, take the following things in mind: I’m limited to the top 40 shows in each demographic, and a big jump or drop for a show is not necessarily indicative of a long-term trend, especially if, say, a big jump is followed by a big drop in the next ratings period.

Among shows with at least 10,000 average audience. A * denotes programs with new hosts compared to spring.

Among shows with at least 10,000 average audience. A * denotes programs with new hosts compared to spring.

Among the francophone stations, CHMP 98.5 remains the top-rated station, claiming to be the No. 1 station not just in Montreal, but in all of Canada. Its various weekday periods are all also No. 1, including the morning show, which had little to fear from Marie-France Bazzo taking over the morning show on Radio-Canada.

La Presse breaks down some ratings numbers. Here are a few others to consider:

Bell Media’s research team breaks down the numbers by some demographics and time periods for both French and English markets. You can also see this video presentation in English, which also talks about other big markets in Canada.

Ratings for diary markets (which are done by written survey instead of automated meters) came out last week. InfoPresse breaks down the numbers for Quebec, which show that Radio X is still the top-rated station in Quebec City.

26 thoughts on “Fall radio ratings: Any way you slice it, Virgin beats The Beat”