Updated Nov. 16 with comment from Wilson, and news of other cuts. 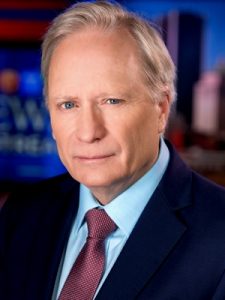 Barry Wilson is no longer an employee of Bell Media.

The executive producer of CTV Montreal, who viewers saw once a week during his Postscript opinion segments, has been with the station for decades, but his position has been eliminated, Bell Media confirmed to me today. Staff were told about the dismissal during the day.

“The position was eliminated as a cost-saving measure,” explains Matthew Garrow, director of communications for news and local stations at Bell Media. “Barry’s executive producer responsibilities will be assumed by (news director) Jed Kahane.”

“I worked with some of the best people in the business and am thankful for that,” Wilson told me Thursday after what he described as a “strange week.”

“It’s been a good run. Who knows what the next step is but I am not retired.”

He similarly updated his Twitter bio to say “Thanks to everyone who supported my efforts over the years. Not done yet.”

My heartfelt thanks to everyone who tuned in for a decade of Postscript.
Hopefully it will return in some form. So much to talk about!!

From CFCF radio to Pulse News to the National Assembly and then to producing Montreal 'a finest newscast. I have been a privileged witness to history. And I worked with some really smart people. I have been lucky. Merci. -30- pic.twitter.com/BHEQgqHc5a

Wilson’s dismissal follows the elimination of the entire sports department this summer, and comes just two months after the expansion of CTV Montreal’s evening newscast to two hours. The general manager position had also been eliminated previously, so Kahane is filling a lot of jobs now (including dealing with viewers angry about Wilson’s dismissal).

A petition has been started and already has more than 600 signatures. As with previous petitions, this won’t change anything, but will probably make Wilson feel better.

Other jobs were also eliminated at CTV Montreal — assignment editor Amalia Fernandez and researcher Peter Schiavi. And cuts were made across the street at Bell Media radio. Most are off-air jobs but one casualty appears to be Picard, the music director at CHOM, who has undergone the ritual scrubbing of existence on CHOM’s website.

Cuts are happening in other cities as well. Since Bell doesn’t exactly put out a press release about this stuff, we have to rely on local reporting to confirm the news:

The Unifor union says about 50 jobs were cut across the country, and lays the blame on the CRTC for allowing Bell to operate like this.