8:30pm: Elected: LIB in D’Arcy McGee and Saint-Laurent, PQ in Iles-de-la-Madeleine. No surprises there.

8:33pm: CTV (which is being carried nationally on NewsNet) has lots of awkward pauses as they’re trying to manage things on the fly.

8:36pm: As if it wasn’t obvious that my parents’ votes don’t count, fresh…woman Yolande James (LIB) is elected in Nelligan

8:39pm: CTV: In four bellweather ridings with results so far, three have the ADQ leading.

8:40pm: So much for that. Greens drop to a distant fourth in Laviolette.

8:46pm: ADQ now first 45-42-35-1 to Libs, PQ, QS. Most likely due to a disproportionte number of Quebec City and small ridings compared to the Montreal area.

8:48pm: André Boisclair wins Pointe-aux-Trembles for the PQ. Charest is leading but not yet elected.

8:50pm: Dennis Trudeau is doing analysis for CTV. Looks like a slap in the face to his former boss for me.

8:59pm: CTV NewsNet cut their local feed off mid-sentence so Craig Oliver and Rosemary Thompson can rattle off about nothing and the network can go back to regular programming.

9:02pm: Jean Charest trailing in Sherbrooke with 10% reporting. Nobody is panicking yet.

9:04pm: Liberal Russell Copeman will be my MNA in NDG. They probably haven’t even looked at my ballot yet.

9:39pm: CTV is projecting that the ADQ will beat the PQ in seat count. “ADQ landslide” writes my source in the counting office. Leading LIB 46, ADQ 43, PQ 36.

9:44pm: Elsie Lefebvre (PQ) has lost Laurier-Dorion to the Liberals.

9:53pm: Strong showing by the no-hope parties. Québec solidaire is second in Gouin and Mercier, the Greens second in NDG.

9:59pm: Three Liberal cabinet ministers are now looking for jobs. Anyone have a use for high-priced lawyers?

10:00pm: Projecting a Liberal minority government, with the ADQ as the official opposition.

10:02pm: Parizeau’s wife, Lisette Lapointe, has taken the lead for the PQ in Cremazie.

10:04pm: Charest is now badly trailing the PQ in Sherbrooke, 35-32%, with over half the polls reporting.

10:08pm: DemocraticSPACE’s predictions are looking kind of silly about now.

10:15pm: PQ’s Robin Philpot, who denied the Rwandan genocide took place, has been defeated in Saint-Henri-Sainte-Anne.

10:22pm: It’s official. Jean Charest has lost his seat in Sherbrooke to the PQ.

10:29pm: The lead in Mégantic-Compton is only six votes.

10:31pm: For those curious, “octuple” is the word for “multiply by eight”, to describe the change in the ADQ seat count.

10:45pm: Some are recalling their projections as the lead narrows in Jean Charest’s Sherbrooke riding. CBC/RadCan is still calling it for the PQ.

10:52pm: Québec solidaire is second in Gouin and Mercier, the Greens second in NDG and D’Arcy McGee and third in Jacques-Cartier.

10:56pm: One of only three ridings still in play: Johnson, with ADQ leading.

11:01pm: André Boisclair is about to give the mother of all concession speeches. Is that an Iranian flag behind him?

11:04pm: Boisclair: “Thank you for being here.” Was he worried they were going to leave in disgust?

11:07pm: Anyone still awake? Come on, André! Blame the ethnics or something. Announce your resignation. Proposition Dumont. Anything!

11:10pm: ADQ’s Pierre Harvey finishes an embarrassing fifth in Outremont, behind both the Greens and Québec solidaire.

11:21pm: CBC has its final numbers: 46 LIB, 42 ADQ, 37 PQ. Since their “elected” candidate in Sherbrooke is now losing to Jean Charest, take that with a grain of salt.

11:26pm: CBC has finally withdrawn its projection in Sherbrooke, as other networks project him elected. 187/212 polls reporting. Fortunately, I have the screenshot: 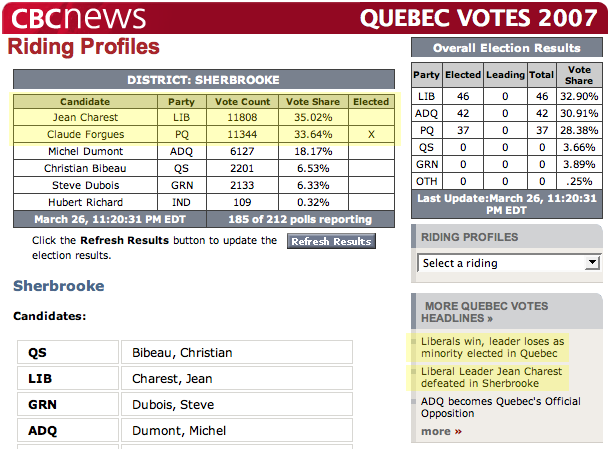 11:30pm: Mario Dumont starts speaking, with a crazy-cheering crowd and the kind of shit-eating grin reserved for nerds who score with the head cheerleader.

11:34pm: Dumont’s speaking like he did at the debate: louder, more passionate, more forceful, more articulate and just plain better than André Boisclair.

11:40pm: Dumont promises to babysit the Liberals “for the people of Quebec”. Go ahead, but don’t spend the entire night on the phone, and don’t bring any friends over, ok?

11:44pm: Dumont promises a “next step” in the next election. Since he’s the official opposition leader now, it will become Liberal vs ADQ instead of Liberal vs PQ for the first time in decades.

11:46pm: CBC’s Michel Godbout: “The numbers were a little mixed-up there before.” They blame uncounted advance ballots for their major foulup calling Charest’s seat for his opponent. Does that sound like a plausible excuse for such an error?

11:49pm: In popular vote percentage, it’s the worst Liberal showing in history. And they won. Insane!

11:59pm: Louis-Hébert, which was called for the ADQ, is now Liberal-leading.

12:02am: Charest’s face is purple as he walks in to make his speech.

12:10am: Charest calls this a “severe” punishment to his party from the voters. Relax, man, you still won. Also, I guess “militants” doesn’t mean the same thing in French as it does in English, since all the party leaders are using the word.

12:11am: CTV didn’t expect to have to pre-empt the Daily Show for election coverage. Fortunately I can just catch it on the Comedy Network at 1:30.

12:13am: Charest indirectly takes a jab at the media for calling his race wrong, thanking his supporters for never giving up on him, even when the networks did.

12:20am: L. Ian MacDonald on CTV, about the “other network” that blew the Charest call: “I would not want to be in that story meeting tomorrow morning.” They don’t mention the network, but we know who it is.

12:22am: Louis-Hébert, the only riding left to call, is still Liberal-leading with nine polls left to report.

12:23am: Voter turnout was 71%, just slightly higher than 2003 which was a record low. Montreal’s turnout was way low (since our votes don’t matter) and Quebec City’s turnout was quite high (since it does).

12:24am: CTV Montreal has shut down its election desk, and is running national news. CBC and Global are still running. Jim Mennie is analyzing for Global, and looks like he’s about to lose consciousness.

12:26am: Télé-Québec is out now too. RadCan, TQS and TVA still running.

12:31am: Booberfish has comments on the Global election updates, squeezed between heart-pounding scenes of 24.

12:34am: Global’s out for the night (a whole hour and a half!), leaving only CBC with English coverage. Peter Mansbridge has taken over with the National broadcast.

12:37am: TQS has closed up so they don’t have to pre-empt the infomercials. We’re left with just RadCan and TVA with local election coverage.

12:46am: Giver Donkey has more election-related oopsiness from CBC.ca. Funny enough, it’s also about jumping the gun on Charest’s riding.

12:52am: The island of Montreal has changed only two seats: Crémazie goes from Liberal to PQ, and Laurier-Dorion goes from PQ to Liberal. The ADQ have no seats on the island.

12:57am: Interesting idea being thrown out on RadCan: With its low showing compared to its share of the popular vote, would the PQ support proportional representation? Would the ADQ? If they both were in favour, they could push it through the National Assembly.

1:00am: RadCan shuts down its election desk. All we’re left with now is CPAC, with Sheila Copps and Brigitte Pellerin providing commentary.

One thought on “The exciting results, live! (as soon as I see them on TV)”