The news hit the fan today thanks to a CP story about a Gazette memo which indicates the company wants to reduce the size of its editorial staff to save money.

Publisher Alan Allnutt said in a memo to employees that management is doing all it can to avoid layoffs (which it’s required to do under its union agreement), and is offering another round of buyouts for those who want to leave voluntarily. (The formula offers a lump sum payment based on how long an employee has worked for the paper: 4.5 weeks per year of service, which works out to a year’s pay if you’ve been there 11.5 years).

Still, most people are looking at this story with disappointment, especially considering recent job cuts at TQS and Global, as well as a general feeling of a decline in quality at mainstream publications due to budget cuts. 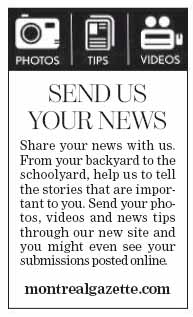 First appearing last week, this new page on the paper’s website encourages visitors to “share your news” by submitting text, audio, photos or video in the hope that such an action will either get a story written about a subject or that your submission will be posted online.

Just about every major media outlet is doing this (see CNN’s iReport for another example, or the Ottawa Citizen version), because it preys on people’s desire to get their 15 minutes of fame, it sounds all Web 2.0-ish and pleases their marketing departments who can say they “get it”, and of course it helps the bottom line because these amateur reporters aren’t paid a cent for their work.

I’ll be looking into some of these issues of “user-generated content” for upcoming articles in this same newspaper (can you feel the irony?), so stay tuned.

In the meantime, what do you think of all this? Should newsrooms be squeezed even further? Are journalists not working hard enough? Are TV, radio and newspaper news departments destined for extinction? Is free, user-generated news the future? Feel free to comment below.

UPDATE (Nov. 4): Deborah Jones of J-Source has some thoughts on the CanWest situation in general.

12 thoughts on “Staff reductions at The Gazette”