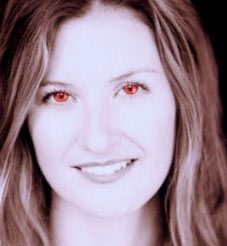 Natasha Aimée Hall: Note the evil eyes, which I totally didn't just Photoshop in there

If you run a media company in Montreal, you should probably keep your eye out for Natasha Aimée Hall, alias Natasha Hall. Hire her, and you’re in danger of bankruptcy.

In December, she was hired at 940 News as the winner of its Talk Show Idol contest. Six months later, the station was losing so much money that it had to switch formats and shut down its news division.

It wasn’t long before she got a new job, joining CTV Montreal’s weekend show Entertainment Spotlight. But a few months later, that show too is being cancelled.

Now, she’s been hired at Q92 as a Sunday evening show host.

5 thoughts on “Natasha the angel of death”