Lots of talent is moving over to new time slots. Here’s the skinny. You can see the full schedule (PDF) on their website.

Not mentioned in any of this, of course, are the people whose shows are getting cut in the shuffle. Sonia Benezra and Judy Croon both get booted off the drive-time show in favour of Saker. Ron E. MacKinnon loses his 7-9pm show to an ealier start to the John Tesh show, and Jeremy Zafran loses his weekend gig from 9am to 2pm on Saturdays. 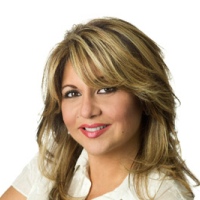 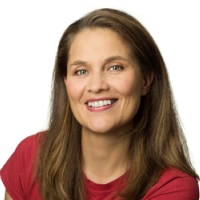 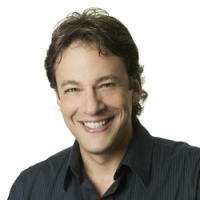 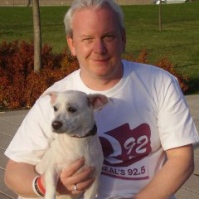 Leo Da Estrela, the other half of Patrick and Leo (Patrick jumped to CJFM for its Virgin Radio remake), also gets cut from his Saturday morning show. (UPDATE: He says he’s sticking around though, as Assistant Program Director for CFQR and CINW 940) 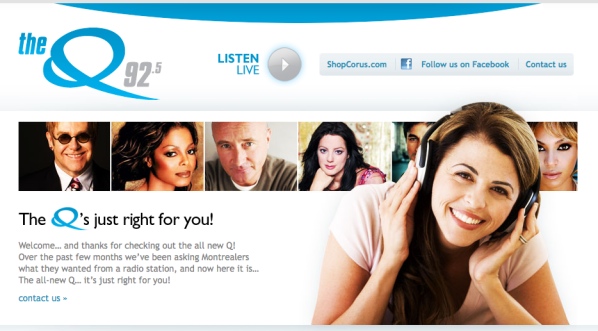 The new website is kind of startlingly bland, with a “listen live” link, some pictures of famous singers, and a link to the now-updated Facebook group, but not much else. I’m assuming more stuff will come later, much like it did on the Virgin Radio 96 site a few weeks after its launch.

Oh, and if the lady holding the headphones there looks familiar, it’s probably because it’s a stock photo available on a bunch of cheap stock photo websites. It was taken by a British photographer named Cathy Yeulet. I guess it would have been too difficult to have a photo of a Montrealer holding a pair of headphones and smiling.

The new era began with a two-and-a-half minute announcement read over a rather ominous-sounding background sound. You can listen to it here (with bonus bumbers and jingles).

This is the text read over the air in its entirety:

Good morning, and thanks for being here for our special announcement.

Over the past few months, we’ve been working on something new for you. We didn’t want to guess what you wanted, so it all began with hundreds of conversations with Q listeners just like you. You told us overwhelmingly that you loved your Q92, but it was time for a change, for something fresh and completely new.

Well, we took all of your suggestions and went to work. You said you wanted us to play more music, not just more songs but a bigger variety. We’re going to do that for you. Every hour during the work day, we’ll feature 10 great Q songs in a row, and you’re going to hear more of your favourite songs too.

You told us you wanted a fresh new sound, something that would be just right for you. We’re going to do that too, with a whole new listening environment we know you’re going to enjoy.

You told us you wanted fun weekends, fun prizes, and a perfect way to de-stress every evening. We’ve got it all for you. Coming this weekend we have special new shows that are just right for you. And today marks the kickoff of our famous Dream Home Makeover, where one of you will win over $125,000 worth of dream improvements to the most important place in your world: your home.

It doesn’t stop there, but let’s get to the music. So thanks for all your listening and loyalty over the years. Today marks the start of something fresh and new. It starts with our new name. As of today, we’re calling ourselves Ninety-two-five, the Q. We’ve got a great new website, revamped shows, great music, and it’s all been built with one thing in mind: that it’s just right for you. Welcome to the all-new Q.

[Jingle: “Montreal’s Montreal’s music … the Q’s just right for you”]

The announcement reads like what you’d expect from a station that brought in a bunch of focus groups and couldn’t really tell what they wanted. The answers are conflicting: They like the station but want to change everything. They want more music but also more prizes and fun stuff.

The announcement is devoid of any specifics, and there’s no corresponding press release yet, but I’m guessing it’s not going to include a whole lot of numbers. Other than the schedule shuffle, the changes seem mostly cosmetic and more about marketing than programming.

So tell me again what I got up early for?

UPDATE: Mike Cohen of The Suburban is the only journalist to talk about this non-change so far. He also mentions changes at 940 AM.

14 thoughts on “CFQR announcement a whole lot of nothing”