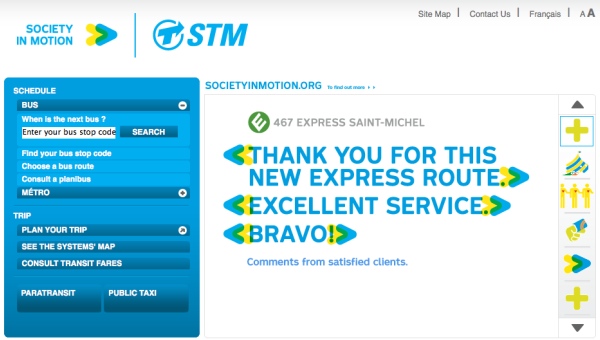 For those who haven’t noticed yet, the STM has redesigned its website to bring it into the 21st century. The previous version, while functional, wasn’t very pretty and looked quite dated.

The new version fixes that, with all the current design clichés:

Fortunately, the design change is cosmetic. Most of the content is the same and even the URLs don’t change, so links aren’t broken.

The redesign fits in with the STM’s “Society in motion” brand, with a yellow and blue chevron forming a green one (it’s not clear what this represents exactly), and an increased emphasis on the environmental benefits of using public transit. The INFO STM page in Metro has also been redesigned with this new design.

They also launched Version 4 of Tous Azimuts, the trip planning application that uses the STM’s database of bus, train and metro departures. The new version is faster, easier to use and shows a map of trips, in addition to allowing smart searches of departure and arrival locations. If that’s not good enough for you, the STM also gives people the choice of using Google Transit, which has had access to departure schedules since October.