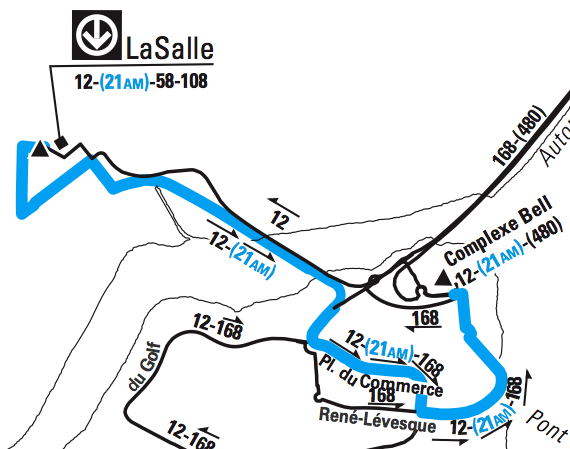 Route of the 21 Place du Commerce (in blue)

The STM has released fall schedules for its bus network, which take effect on Aug. 31. Two significant changes are worth noting:

A minor change (I’m sure there are others): the 350 Verdun/LaSalle night bus now ends at Newman and Airlie instead of the Monette-Lafleur terminus.

According to the schedule set in May, the STM is supposed to move to a proof-of-payment system starting Sept. 1. This means that you must carry your Opus card or ticket with you at all times in the metro system or on buses, otherwise you can be fined. (I assume there will be a grace/warning period before any actual fines are given in this way.)

If you haven’t seen it yet, the new 2009 system map (WARNING: 10MB PDF file) currently being installed in metro stations is more colourful than previous versions. Among the changes, dated June 22: “rapid transit” routes (express and reserved-lane buses) are shown in green, and Monday-to-Friday-all-day buses are given their own category in the legend, separate from seven-day routes and rush-hour-only routes.

And while I have your attention, the STM is having an open house at its Legendre garage in Ahuntsic on Sunday, Sept. 13. Registration and the tour are free, and there are shuttle buses from the Crémazie metro station that will bring you there, since there’s no parking on site.