UPDATE (Nov. 25): The Gazette’s Andy Riga reports the STM says the average price for these shelters is actually lower than what they reported earlier. Also see below my photos of this shelter at night. 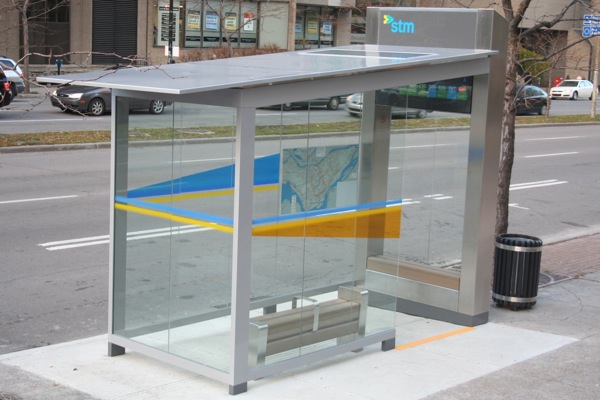 A prototype of the new STM bus shelter at René-Lévesque Blvd. and Jeanne-Mance St.

On Monday, the Société de transport de Montréal made a big splash of this rectangular glass box, inviting the media to take pictures and witness a dramatic unveiling. This is the model of a new style of bus shelter that the STM is planning to replicate hundreds of times.

Michel Labrecque, the STM’s chairman, said the biggest thing about it is the look, and how the aesthetic design of the shelter will draw more transit users in. People want to wait in something “sharp”, he said, something that looks more like the future than the stone age.

The shelters will cost between $14,000 and $16,000 about $12,000 each, not including the development cost, which will bring the total price for 400 shelters to $14 million. Even then, it’s significantly more than the price of existing shelters.

After installing three prototypes (the other two will come next month), the STM will seek input from users before making the order for the rest.

Not wanting to pass judgment before I saw it myself, I decided to pass by the shelter on the day after the big announcement, when all the TV cameras, PR people and giant tarps had long gone (and when the weather wasn’t so rainy). 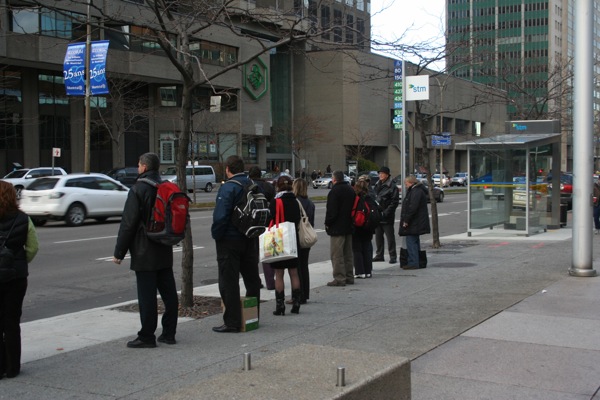 Users line up next to the "totem pole" near the shelter

The first thing I noticed was how the shelter was empty. Everyone was waiting for the bus at the stop more than 10 feet away. 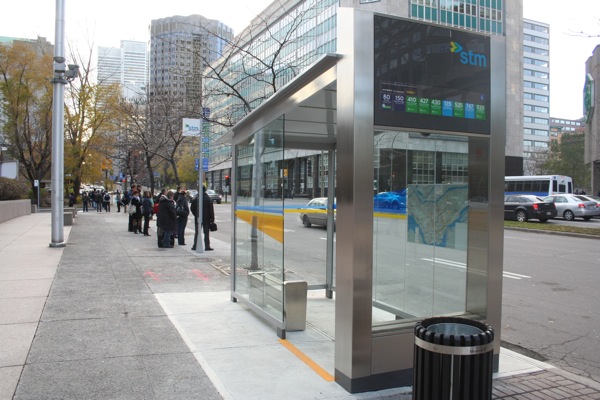 Nobody's using the shelter while waiting for the bus

I stood nearby observing the behaviour of transit users waiting for one of ten buses that stop here at the beginning of the afternoon rush hour. I stayed for a little more than half an hour, watching as about 50-60 people waited for and boarded buses.

In that time, only one person entered the bus shelter. Everyone else waited at the “totem pole” – and because the natural tendency of bus lineups in Montreal is for them to start at the flag and expand upstream, the line moved away from the shelter instead of toward it.

Now, the weather didn’t exactly encourage people to seek shelter. It wasn’t raining, it wasn’t particularly cold or windy, and nobody had to wait that long for their bus.

But for something Labrecque considers so “sharp”, this shelter seemed to prompt very few people to want to actually use it. I heard plenty of comments about the design from people chatting with their friends and colleagues (mostly positive), but I don’t think the purpose of this thing is to be looked at.

I also noticed that the shelter seemed pretty small. About the same size as its predecessor. There’s another version of the design that doubles the interior space, but I think it would have made sense to install it here.

Here’s what you’ll find in this new shelter. 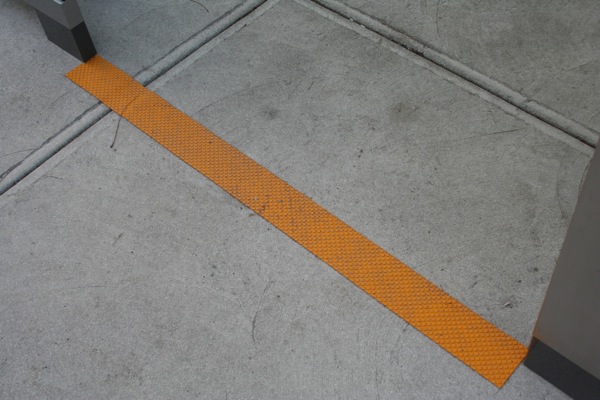 At the entrance to the shelter, an orange strip indicates ... something

Like many shelters downtown, the entrance to this one is on the side opposite where the bus stops. I imagine this was done for safety reasons – to prevent people from stepping out into the street and accidentally getting hit by a bus. But it forces people to walk away from a bus when it approaches. This makes it more likely the driver will think the person isn’t interested in getting on and drive right by the stop. It would make more sense to back the shelter a bit further from the curb and put the entrance on the side facing the bus. 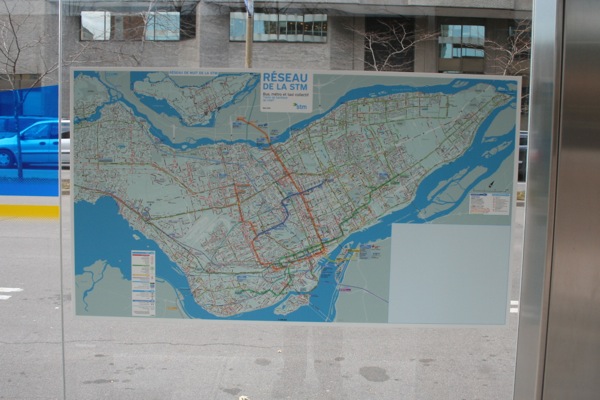 Like in previous shelters, a network map is attached to the glass wall 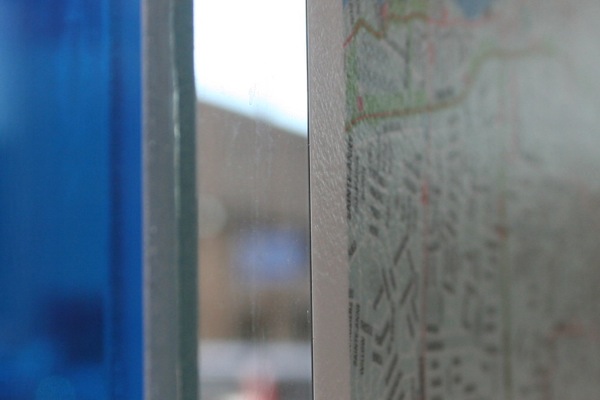 If you touch the map, you’ll find it has a rough texture to it, probably a result of the anti-graffiti coating they’ve given it. It’s also glued to the glass, while the previous design had a paper map behind a glass casing. This will probably make it more difficult for maps to disappear from the shelter, but it will also make it more difficult to replace the map when it gets updated. 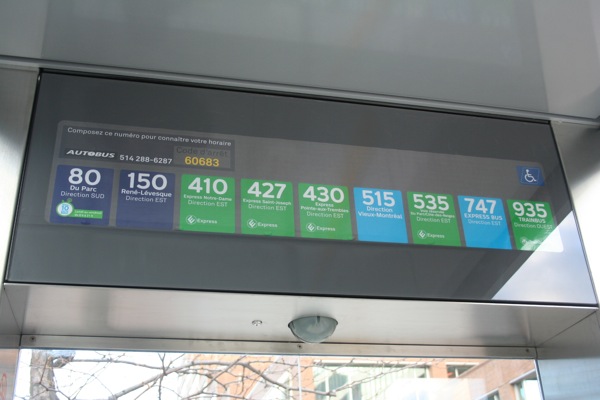 Near the roof inside, a list of bus routes that stop here 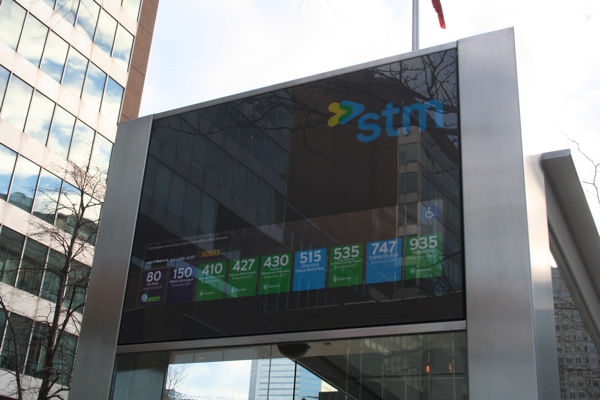 The shelter has a list of the routes that stop here – separate from the totem pole which replaces the old bus stop sign. The design of the list of buses on the shelter seems to suggest a hard limit of nine routes per stop. In order to fit more of these coloured boxes, a second row would need to be added or the boxes would need to be made smaller. Of course, there are very few stops in the city with as many bus routes passing through, but they exist. And it doesn’t seem crazy to think they might add a 10th to this stop. 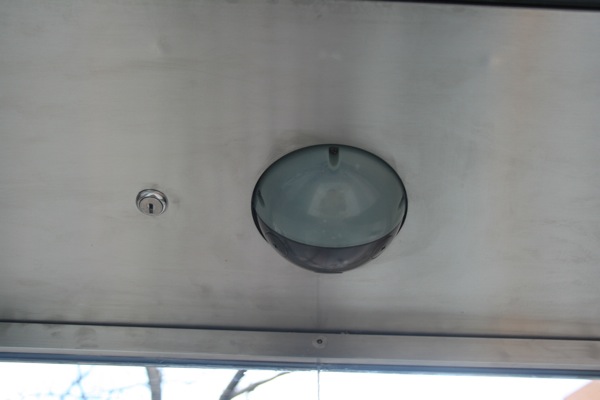 Motion sensor in a half-sphere under the ceiling

Lights in the shelter are to be controlled by motion sensor, so they don’t waste energy unnecessarily. That makes sense, but it’s worth pointing out that the previous shelters were lit by having large backlit ads, something the ad company would not want dimmed just because nobody’s in the shelter. 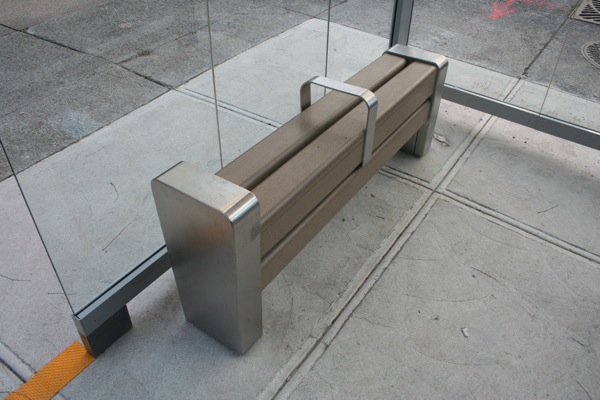 It’s unfortunate to see that despite making changes to improve the design of the shelter, the bench is still basically the same. The seat (the brown part) is made of some plastic-like material that remains comfortable even in the cold. The metallic parts appear to be aluminum, which conducts heat very easily and will be cold as hell during winter.

It’s pretty rare that I see people use these benches. Maybe there’s a psychological reason, maybe they’re too small or people think they’re too dirty. Whatever it is, this design doesn’t seem to be making it more inviting. 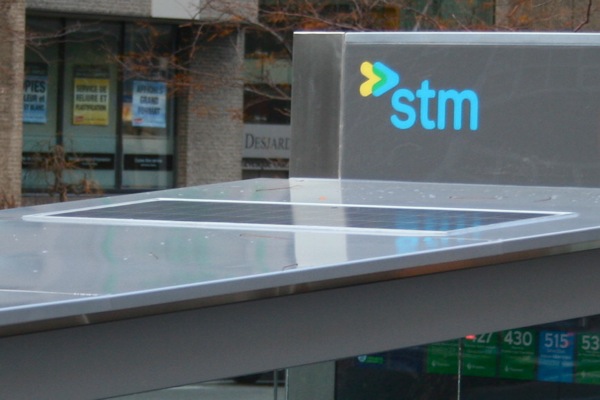 A solar panel on the roof provides power

To emphasize how green the STM is, this shelter has a solar panel on top which provides power that’s used to light it at night. The STM says some will be solar-powered and others connected to the electrical grid. 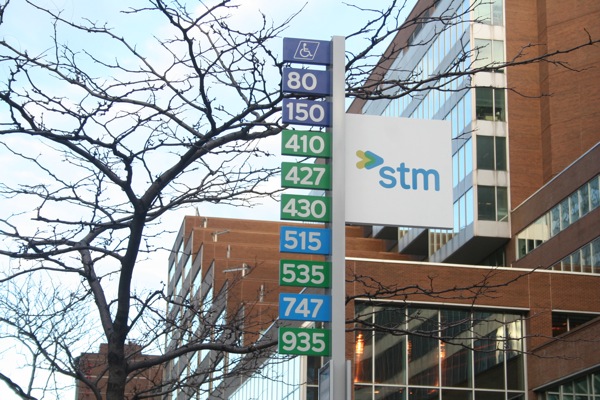 The second part of this new design is the “totem pole”, which replaces the old bus stop sign. It also has schedules for each bus attached to it.

In the case of the stop at René-Lévesque and Jeanne-Mance, this pole is inexplicably about 10 feet away from the shelter.

The first thing that comes to mind when looking at this is to wonder what the colours mean.

As a transit buff, I know that dark blue is for regular routes, green is for express routes, and light blue is for special routes (the 515 is a tourist bus that goes to the old port, and the 747 is the airport express bus). There’s also black for night buses and gold for seniors’ buses. But there’s no way to discover this at the stop. So the colour backgrounds become this secret code that only the elite few can decypher. 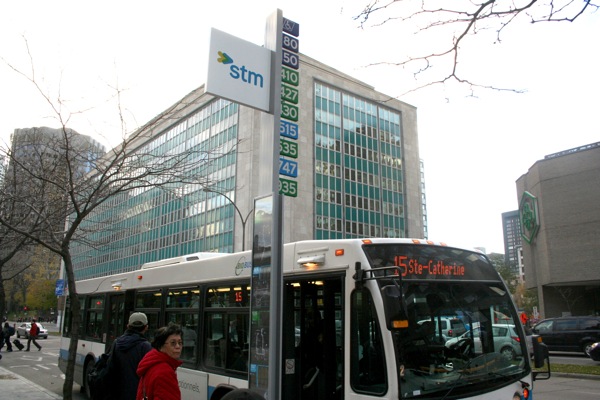 Another disadvantage to this new design becomes apparent when I notice two things. First of all, the 15 bus is stopping here, even though it’s not listed on the totem pole or the shelter. It’s stopping here as part of a (long-term) detour because of construction on Ste. Catherine Street. 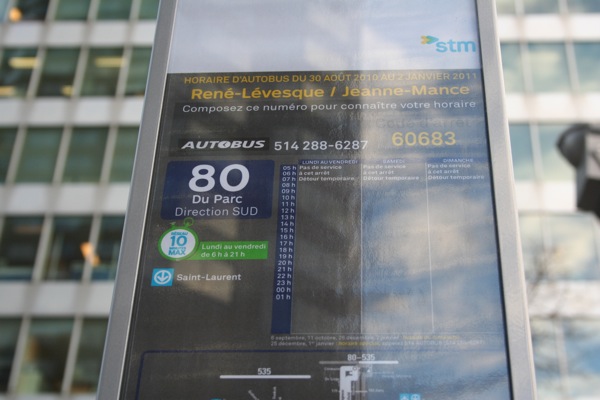 The schedule for the 80 bus shows it doesn't stop here

Secondly, the 80 bus is listed as having a stop here, but it doesn’t.

The route for the 80 bus was changed because of all the construction around the Quartier des Spectacles to make a temporary detour permanent. Instead of taking Jeanne-Mance, the bus now takes St. Laurent until Ontario and then heads back to the Place des Arts metro. But because of construction at St. Laurent and Ste. Catherine, the bus has been detoured back onto its original route – Jeanne-Mance now being open to through traffic.

Under the old design, the STM would slip a specially-designed detour flag on top of the bus stop sign, indicating which buses stop there and which have been detoured. Under the new design, people have the impression that the 80 bus stops here unless they think to look at the schedule. 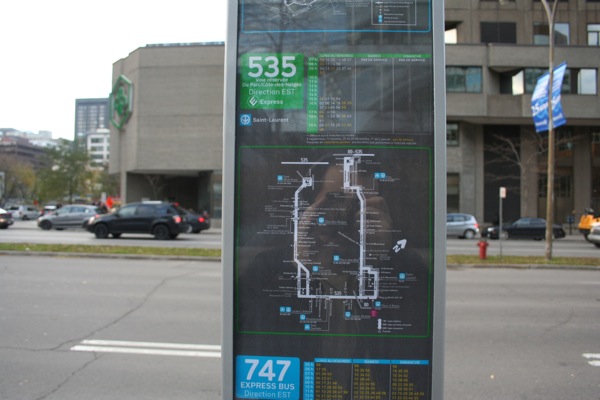 A typical schedule and route map, this one for the 535 bus (that doesn't actually stop here)

The 535 schedule, meanwhile, gives no indication that this stop has been moved.

I don’t know if the STM is developing a small condom to put over the flags of bus routes that have detours, or if it’ll just paste something over its schedule, but the potential for confusion seems to be larger. 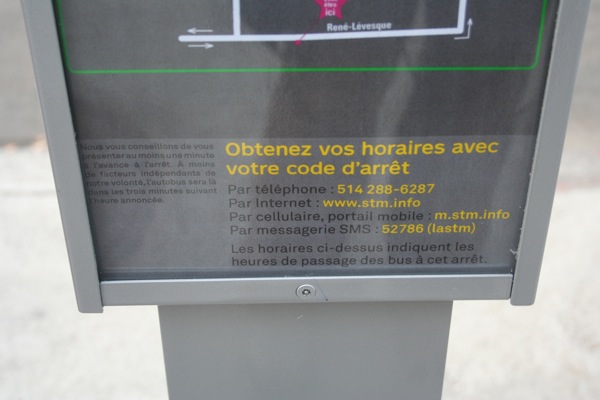 Perhaps I shouldn’t be too hard on it because it is a prototype and those things always have unforeseen issues. It also does look very nice.

But aside from motion-sensor lighting, which isn’t exactly a top priority right now, there’s little here you can’t find in existing shelters at half the price.

Image consultants, which I can only imagine the STM has too many of right now, always want to change things so people will pay attention to what’s new. But all that’s changed here is the look.

There are serious improvements that can be made to bus shelters to make them more attractive to riders. It starts with being heated in the winter, then having schedules at a glance inside the shelter (which isn’t the case here), and a comfortable place to sit and wait (which also doesn’t exist on the tiny bench).

The improvements here are bells and whistles at best and at worst a waste of money on fulfilling some industrial designer’s wet dream.

If you asked bus users or potential bus users would make them more likely to use the bus, I doubt “make the bus stop sign more sharp” would rank high. 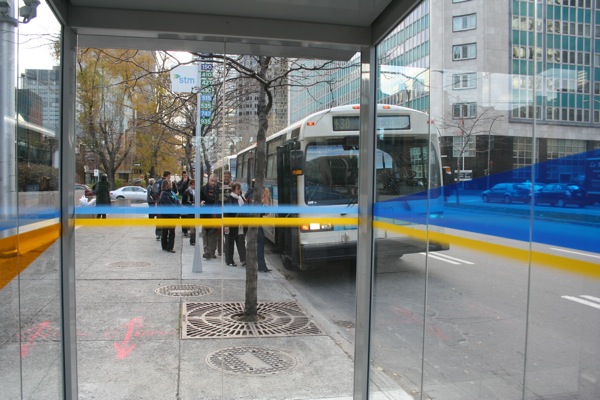 The fact that nobody wants to use this shelter right now should be clear evidence that this design is ill thought out.

UPDATE (Nov. 11): La Presse’s Lysiane Gagnon goes way over the top in her criticism, calling these “des abribus de millionnaires” – as if the super rich would use an unheated shelter to wait for a bus in the middle of winter. Take that with the same grain of salt as her suggestion that nobody uses bike paths in Montreal, or that Bixi is a financial disaster.

UPDATE (Nov. 25): Curious about how this shelter works at night, I revisited it a few days later after dark. 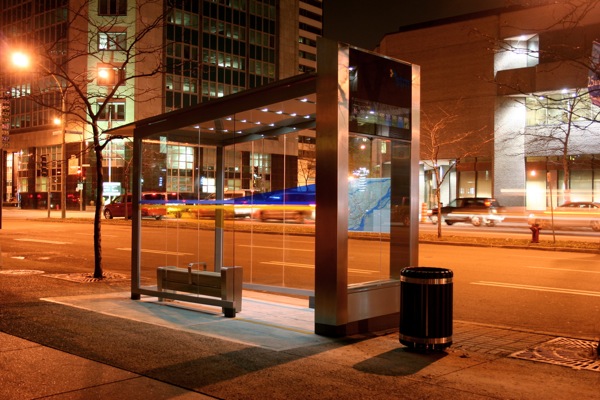 The new shelter at night: Neat, but not very bright

What struck me was how dark and uninviting it was. The picture above is brighter than how the scene actually appeared (I needed a pretty long exposure). 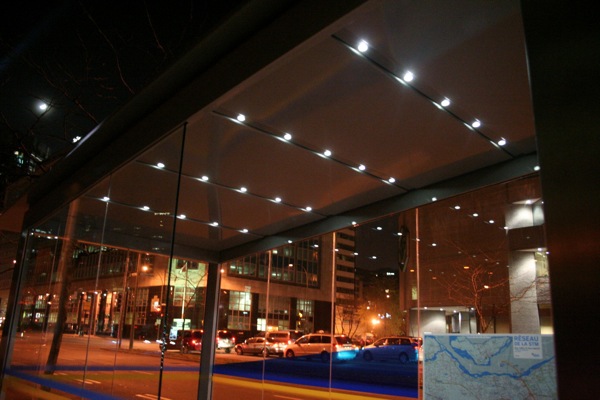 There are lights in the ceiling of the shelter (supposedly they’re motion-controlled, but I didn’t see them turn off or on while I was there). But compared to the previous CBS Outdoor shelters with the domed roof and giant backlit ad, it felt kind of dark. 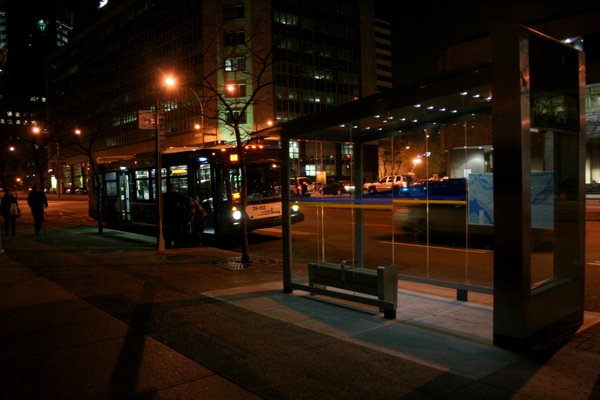 You’ll note that the part of the shelter that lists information on the buses that stop here and the bus stop code is unlit. 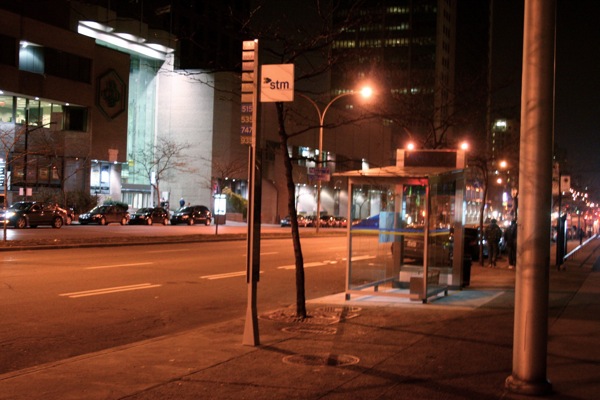 The totem pole is completely unlit

The problem is worse when it comes to the nearby totem pole that lists the buses that stop here and their schedules below. It’s completely unlit, which not only makes it seem like it’s inactive after dark, but also makes it hard to read the schedules. 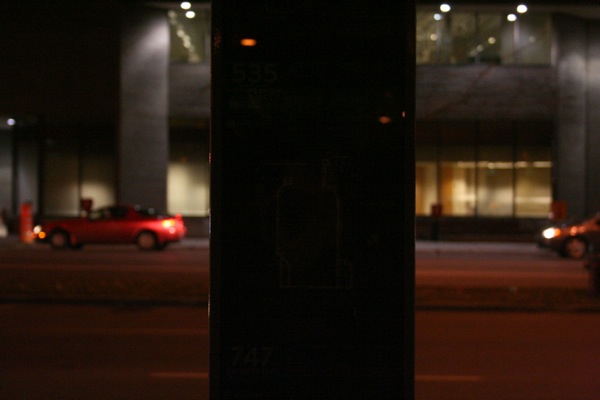 On the side facing the sidewalk, the schedule is impossible to read because it's so dark

I’m not exaggerating how dark it is here. Even with my pretty good night vision, I couldn’t read the schedule on this side. 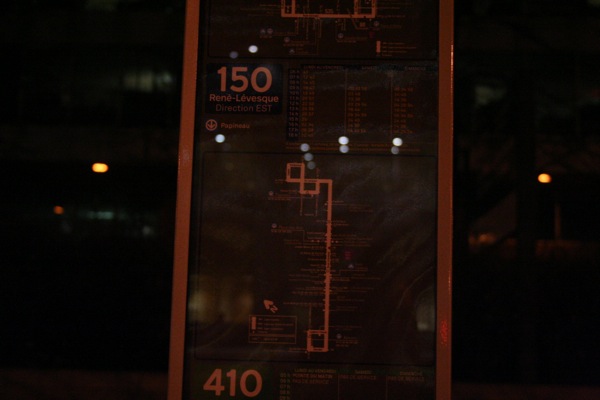 I had better luck on the other side, but even then it wasn’t easy. Someone with poor eyesight would struggle with this.