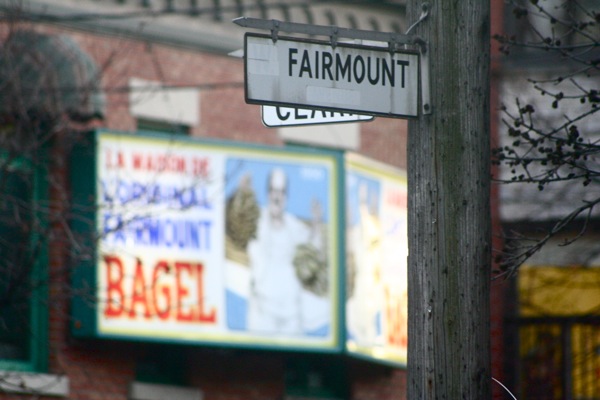 With the 10th anniversary of Mordecai Richler’s death approaching (and the resurgence of interest in his work), city councillors Marvin Rotrand and Michael Applebaum are doing some political organizing of their own. They’re trying to get people to sign an online petition that demands the city “make an appropriate gesture to commemorate the contribution of Mordecai Richler in naming a street, a public place or building in his honour.”

The petition doesn’t make any suggestions, doesn’t necessarily suggest renaming anything, and doesn’t even demand that it be a street. But the discussion has begun, and it has 683 signatures so far.

The Gazette’s Bill Brownstein made the first concrete suggestion: Fairmount Ave. in Mile End, where Wilensky’s is located. “That shouldn’t upset too many people, other than surviving members of the Bagg family,” he writes.

Well, there’s Fairmount Bagel, and Garderie Fairmount, and Fairmount Hardware. (Okay, maybe not that last one, it’s boarded up and closed now.)

And there’s the Société St. Jean Baptiste and other language/sovereignist hardliners, who just hate Richler. They denounce him for being divisive and demonizing politicians, as if they are themselves above both those things. They say he’s an anti-Quebec racist, which is an odd thing to say since he himself was a Quebecer.

It’s not that I agree with or think we should honour some of the meanspirited things that Richler has said. But if we can fawn over Pierre Falardeau despite all the crazy shit he’s said, certainly we can do the same for Richler.

More sane nationalists like Jean-François Lisée agree it is time we name something after Richler. According to the Commission de toponymie, the name Richler currently isn’t attached to anything in this province. 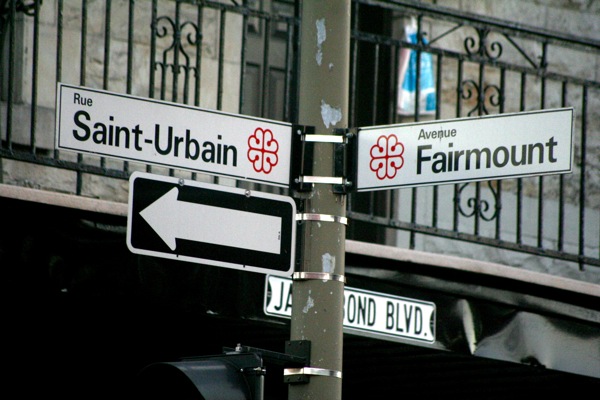 Rotrand has learned the value of public consultation in situations like this. The city administration had the best of intentions when it announced it was going to rename the generically-named Park Ave. in honour of Robert Bourassa. But residents and business owners mounted a huge campaign against it, arguing that not only would it cause practical problems like replacing dozens of street signs and forcing businesses to change their business cards, but that it would take away from the city’s history rather than adding to it.

It’s a no-win scenario. Rename something big and central like Park or St. Urbain, and you start poking holes in the city’s history. Rename something small like a side street and you diminish the importance of the person you’re trying to honour (Ruelle Nick-Auf-der-Maur, anyone?). Name a new street in a suburban development, and you might as well be naming something in another city.

Fairmount is an attempt at a compromise. It’s not as important as St. Urbain or St. Laurent, but it’s not some tiny side street either, and it’s right at the heart of Richler’s neighbourhood.

But Fairmount also has history, probably best known as the street that houses one of Montreal’s two most important bagel makers. Renaming the street might make sense in that context, or it might not.

So we have a vague campaign that leaves the biggest detail up to a city bureaucrat. And the pundits throw out their ideas too.

I think, like with Park, this process isn’t starting the right way. If this is to be truly a grass-roots campaign, it should start with the people who live and work on the street that would be renamed. If Fairmount Bagel and its neighbours want to mount a campaign to honour Richler, then the city should consider it. If some other street’s residents want to do the same, they should consider that as well.

The problem with this scenario is that it isn’t top-down, and the councillors are powerless to force it through. It depends on regular people spontaneously starting a major campaign with their neighbours to get something changed.

But that’s the only way I can see this happening to everyone’s satisfaction.

Of course, if it wasn’t a street we were renaming, the risks would diminish along with the rewards. Other naming suggestions have also come forward, from a small park to a sandwich or drink. Rotrand tells Radio-Canada that people have suggested a cultural prize or library would make more sense.

But nothing carries the same punch as a street named after you.

UPDATE (Nov. 14): Chantal Guy explores the subject and agrees with the idea, even if Richler wasn’t exactly a saint.