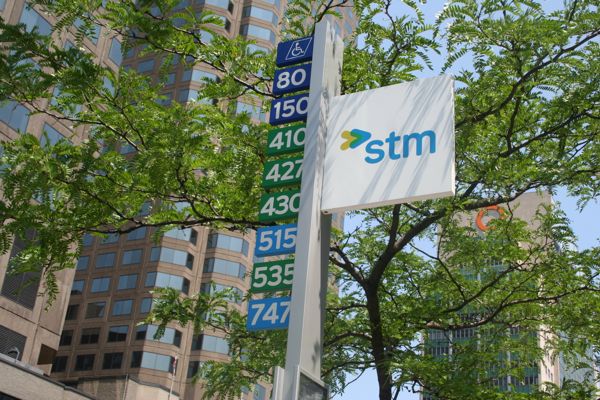 Cool, I thought, but as hip as it looked, it also meant losing a lot of information, such as what metro/train stops a bus will go to, whether it’s a rush-hour-only bus or express bus or night bus, and the bus stop code. All this information was moved to a panel lower down that has schedules and other info.

More importantly, I thought, it’s going to be more complicated to add routes to this totem pole, and you can’t indicate detours or disruptions in service like you can by slipping one of those temporary bus stop covers over the traditional signs.

With the new night bus network taking effect on Monday, adding four new routes to this stop (and the deletion of this leg of the 515 bus, which also took effect Monday), I passed by on Sunday to see if they had updated the totem pole. 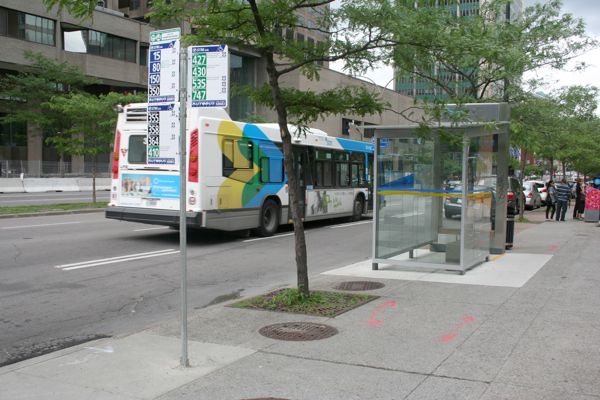 As it turns out, they’ve taken it down and replaced it with a regular bus stop sign.

On the shelter itself, there is also a list of bus routes that stop there. I remarked that it seemed limited to nine routes (the exact number that stopped there at the time). Now it will need to fit 12. 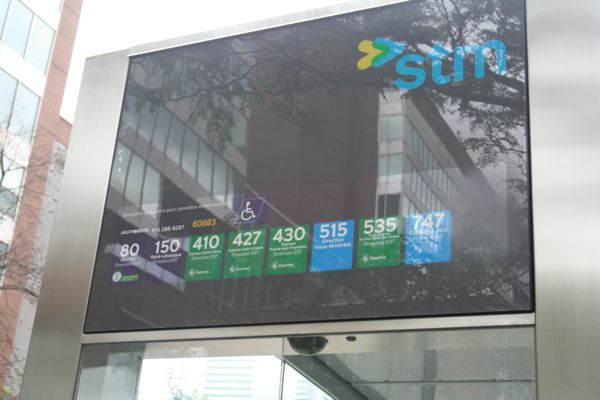 A list of stops on the shelter remains unupdated

So far that sign (and a similar one on the inside) remains unchanged, which could lead to some user confusion. (Then again, you can’t really read it at night, so maybe it doesn’t matter that the night buses aren’t listed there.)

Hey, it’s a pilot project. Sometimes these things fail. I could point out that I saw these problems the first day I saw this new design, but instead I’ll just hope the STM has learned its lesson.

UPDATE (July 5): Andy Riga talked to the STM, which downplayed the significance of the totem pole and said it was not part of the new bus shelter design pilot project. “It was a suggestion of the designer to put an element of clientele info,” Marianne Rouette told Riga. “So, as it was not intended to be permanent, we came back to the bus stop model we currently use.”

11 thoughts on “STM takes down its totem pole”