Over the coming days, I’m taking a closer look at the applications for Montreal’s AM clear-channel frequencies 690 and 940 kHz that were presented at CRTC hearings in October. We’ll start with the first one: Metromedia (Cogeco), which applied for an English-language all-traffic station on 940. 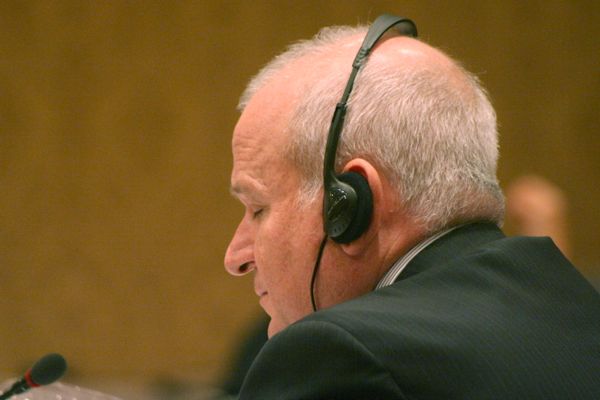 Mark Dickie, General Manager of The Beat 92.5 and part of the organizing committee for Cogeco's English all-traffic station

“We didn’t expect this,” Mark Dickie said. “Where was everybody in February or March of 2010? Nobody was really interested in those frequencies then.”

It’s a perfectly reasonable argument from the group that first applied to reactivate 690 and 940 AM. The frequencies have been unused since January 2010, when CINW 940 and CINF 690 were shut down. The licenses for those two stations were officially revoked on June 8, 2010. For almost a year, anyone could have applied for those frequencies, but nobody did.

So when Cogeco, which acquired Metromedia from Corus on Feb. 1, struck a deal with the Quebec government to setup two all-traffic stations on those unused (and seemingly unwanted) frequencies, there was no reason to think the regulatory step was anything more than a formality. The CRTC originally scheduled the applications to be heard along with a bunch of others in a rubber-stamp hearing (it ended up lasting 15 minutes, with no presentations or questions).

But then everyone decided they wanted in, too. Interventions were filed by competitors Astral Media and Bell Media, and would-be competitor Tietolman-Tétrault Media. They demanded that there be an open call for applications, questioned giving clear channels to local all-traffic stations, and in the latter two cases said they would apply for one or both of those frequencies instead. They also pointed out how Cogeco asked for – and received – an exception to the CRTC’s ownership concentration rules by having a third French-language FM station in Montreal, and that another French-language radio station would give them a total of five in this market.

The CRTC responded by pulling the two applications from that hearing and issuing an open call for applications for those two frequencies with an Oct. 17 hearing date in Montreal. The call prompted four other applications.

Cogeco, whose deal with the Quebec government initially had an Oct. 31 deadline for the stations to go on the air, decided it couldn’t wait for the full process to complete itself, and transformed CKAC Sports 730 into a French all-traffic station on Sept. 6.

It subsequently withdrew its application for a French all-traffic station on 690.

I asked Dickie why, if Cogeco considered the CKAC shutdown regrettable, Cogeco didn’t maintain its application and either switch the all-traffic station to 690 or put sports on it. He said they felt, in light of the interventions and the concern about how many stations Cogeco owns, that it was unlikely such an application would be successful.

It isn’t too difficult to imagine what an English-language all-traffic station would sound like. Just tune into 730 AM and translate.

The plan for the English-language station would be virtually identical to the French-language one, except for the language. You can get a sense of what the French station is like in this blog post.

Essentially, it would be all-traffic, live from 4:30am to 1am on weekdays and 6am to 1am on weekends and holidays. Two people work at a time, one acting as on-air announcer and the other taking phone calls from listeners reporting traffic problems, and they periodically switch to give the other a break. Traffic reports come about every five minutes, some shorter, with weather, some longer. The reports are much more thorough than what you hear on other radio stations, particularly in terms of giving traffic information for areas outside of downtown or the highways toward it.

The most controversial part of this proposal isn’t Cogeco’s radio empire in Montreal continuing to grow. It’s not even that another clear channel would be used for traffic reports. It’s that this station, like CKAC, would be funded mainly by the provincial government, which would hand over $1.5 million per station per year to Cogeco to run the stations. In exchange, the government gets 25 minutes of advertising a day, which works out to about $164 a minute for advertising. I’m told this is high even for commercial radio stations during high listening hours (though not necessarily outrageously so).

By contrast, commercial ad revenue isn’t expected to reach even half of what they get from the government. This is, essentially, a government-funded radio station. But Cogeco talked about the agreement during the hearing as if this was just an advertising contract.

The Quebec Transport Ministry is engaged in a public relations battle, trying to keep motorists happy while the department is under fire for everything from corruption in the construction industry to crumbling overpasses and bridges. The upcoming rebuilding of the Turcot Interchange is going to make traffic hell, and this is part of their solution to it.

(Whether drivers knowing about traffic problems will help solve them is a good question.)

It seems outrageous (and I certainly thought so), but what the Quebec government decides to do with its money is no concern of the CRTC, which is a federal body. Its concern is whether this would be the best use of these airwaves, and whether their content would be Canadian enough and local enough.

The commissioners did express a concern that programming changes would have to be approved by the Quebec government, making it a de facto controller of the station. The agreement between the two specifically states that this is not the case, but it’s really a semantic argument. The agreement sets very specific criteria for what’s on the station (from the operating hours to the length of its commercials), and Cogeco said clearly that the station would not be feasible if it wasn’t for the government money. 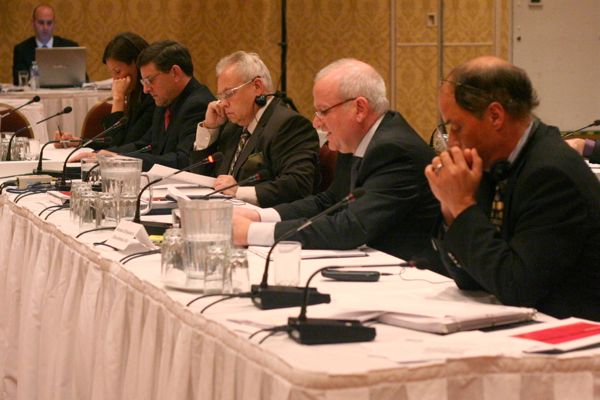 Cogeco’s argument in favour of an all-traffic station is simple: Traffic affects hundreds of thousands of drivers every day, and they need traffic information. They have polling data showing a vast majority of radio listeners would listen to an all-traffic station at least on occasion. It points to a similar station in Vancouver, AM730, which the format is based on.

Though at first it may seem as though an all-traffic station is redundant to just about every other radio station (even the CBC does traffic reports during rush hour), Cogeco argues that the depth of traffic information would be far higher than you could get in a 30-second report, and that information on traffic issues needs to be available faster than every 10-15 minutes, and more often than just during rush hour.

As proof, they point out that their French all-traffic station receives about 500 calls a day from motorists and has 440,000 listeners (!)

Asked why they need a clear channel for all this, Cogeco points out the poor reception of other channels like 990 in the West Island and western off-island areas, which are rich in anglophones. It says a wide coverage area is needed because of long commutes of some people. It specifically says it needs to cover eastern Ontario, because some people commute from that far into the city every day.

Finally, Cogeco plays the language card, saying that it would be unfair – and against the CRTC’s mandate – for a French all-traffic station to operate on a clear channel but an English station be denied.

Astral Media, which expressed concerns about Cogeco’s application the first time, didn’t submit an intervention after the open call for applications and didn’t appear at the CRTC hearing. But Bell Media and Tietolman-Tétrault, which had applications at the hearing, echoed their arguments against the idea. Radio listener, CIDX Club president and Radio in Montreal moderator Sheldon Harvey did as well in opposing the application.

Opponents said the service is a niche one, that people would listen to for short periods if at all, and that it’s local to Montreal and doesn’t need to be heard from as far away as the Gaspé or Val d’Or with a good antenna.

They also added some common-sense technical arguments for having this station be awarded another frequency. They said most traffic information is acquired during daylight hours (except when the days are really short), so a traffic station could deal better with a reduced signal at night.

They also pointed out that car radios tend to have better reception than tabletop ones because they’re built better and have better antennas. And since people who want traffic information tend to drive cars, having a strong signal becomes less important.

The CRTC commissioners asked all the applicants to consider alternate frequencies. There are plenty available: 600, 850, and 990 if CKGM changes frequency. All are Class B, which requires a reduction in coverage area at night. The commission even gave everyone a week to think about it.

For Cogeco, this was a non-starter. None of the alternative frequencies would be adequate. Only 690 and 940 would do, both because they already have the equipment to begin operating on those frequencies, and because their coverage area would include the West Island and southwestern Quebec.

The letter sent a week later was unequivocal: “…we cannot and will not accept a licence that is not based on the use of either  940 kHz, for which we have applied, or 690 kHz”

The usefulness of an all-traffic station is clear, and though there are concerns about the contract with the government, like how much control Cogeco really has (it says it has enough) and whether the station would continue if the contract wasn’t renewed (Cogeco says it would, albeit with significantly less means), neither is likely to be a dealbreaker for the CRTC.

The bigger question is over having a clear channel. Cogeco is absolute, which is a bit puzzling. Their agreement with the government says the station has to cover the metropolitan area, but it doesn’t define what that means exactly. I see no reason to believe the government wouldn’t let give them their $1.5 million a year if the station was on 600, 850 or 990.

Refusing to consider alternatives is, I think, more of a strategic move to try to force the commission’s hand. (Tietolman-Tétrault-Pancholy tried something similar, saying they wanted two stations or none.)

The bilingualism argument – that the English station must be approved because the French station is running – might work with the CBC but is unlikely to sway the commissioners, I think.

Since Cogeco has refused alternative frequencies, the commission will have to either judge it superior to (at most all but one of) the others, or just say no. The technical arguments about car radio reception being better and traffic being more useful during the day than at night are good ones. But whether this application gets approved will probably depend more on how the CRTC feels about the competing applications, particularly Tietolman-Tétrault-Pancholy.

I rate this application’s chances fair.

The revised contract with the Quebec government says the station must be operational within 60 days of approval by the CRTC (the CRTC says a decision should come “by Christmas”), and no later than Feb. 29, 2012.