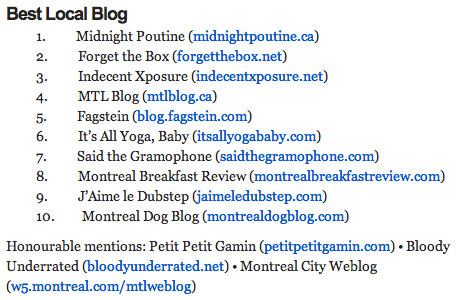 It’s a ridiculous popularity contest, and often it’s not even that, but more of an election, a contest of who can push more friends to fill out ballots for something whose prize is a bit of free marketing but more pride than anything else.

And yet, I’d be lying if I said I was untouched by seeing the name of my blog and Twitter feed listed among the Mirror’s Best of Montreal list yet again. Whatever my feelings about the survey, it’s clearly an indication that there are those of you out there who, when asked what their favourite local blog is, think of this one.

So let me take this opportunity to say thank you, for being fans, for subscribing, for reading some far-too-long posts, for adding insight in the comments, for following me on Twitter despite all the silly stuff I post there, and for justifying my existence and giving me the kind of audience that forces the people and organizations I cover to take me seriously.

Congratulations to my fellow honourees, whose readers also somehow thought of them when it came time to vote:

And, of course, a thought for those who didn’t quite make it, despite trying really hard, and for those who are inexplicably absent from this list, including some of my fellow journalists who were probably left out for not being alternative enough. 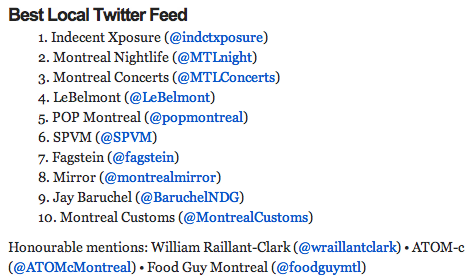 The results of the survey always have to be taken with a grain of salt, despite all the efforts Mirror staff take to weed out duplicate votes and ballot stuffers. Nevertheless, some things of note in media categories beyond the brief analysis the paper itself provides:

7 thoughts on ““Best” of Montreal? But seriously, thank you”