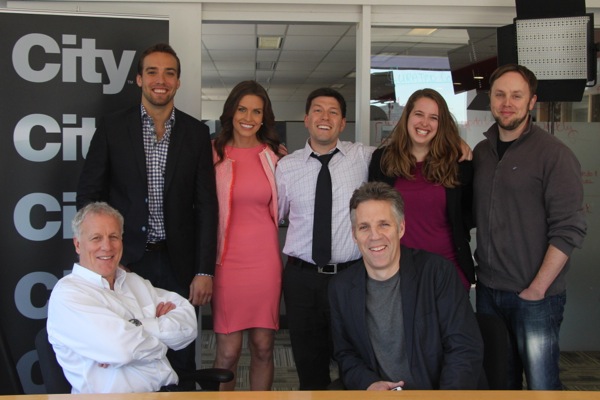 If you’re a regular reader of this blog, you probably know the history of this station by now. CJNT was born as an ethnic station, where the only thing that was constant was that it lost money. It was purchased by Canwest, turned into a hybrid station with cheap ethnic programming (to satisfy its CRTC licence) and third-rate U.S. programming as part of the secondary CH and later E! network. When Canwest went under and had to get rid of the money-losing network, it sold CJNT along with Hamilton’s CHCH to a company called Channel Zero for $12 in 2009.

Channel Zero completely reinvented CHCH by converting most of its daytime schedule to local news. But it failed to do anything nearly as spectacular with CJNT, airing music videos to fill its airtime. It stopped producing the local shows that were on, instead running repeats of them to comply with licence obligations.

Finally, a year ago, Channel Zero accepted a $10-million offer from Rogers to buy the station, and City and OMNI programming started running on it while they awaited CRTC approval of the purchase. To convince the CRTC this was a good idea, Rogers proposed funding an all new station, run as a producers’ cooperative by an independent company, that would ensure Montreal was still served by an ethnic TV station. The CRTC gave it the okay in December, and told Rogers it had until Sept. 1, 2013 to launch the local programming it promised.

The morning show, which will be a much more involved operation with three hours of live programming every weekday, is still set to launch in late August. Rogers also commissioned an independently-produced weekly lifestyle show set to begin in July. 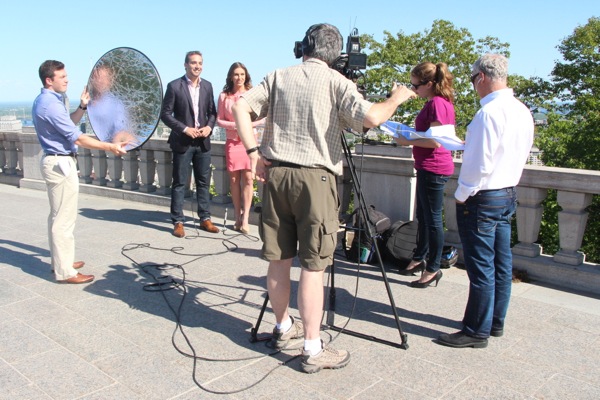 Montreal Connected staff, including production associate Sean Coleman holding a reflector (backwards, using it as a windbreaker) and Brian Murphy running the camera, shooting the show’s intro and outro segments on Mount Royal.

What to expect from Montreal Connected

Montreal Connected is a local sports magazine show. Split about halfway between amateur and professional sports, it consists mainly of profiles and feature stories about local athletes. The first show features stories about the Canadiens’ Brendan Gallagher, an arm-wrestling league and McGill Rhodes Scholar and track star Sarah McCuaig.

The show doesn’t have a studio (they haven’t really decided if it will start using the morning show’s one when it’s built later this summer), so everything is shot on location. For this week, the intro and outro bits were shot on the main lookout at Mount Royal Park.

It won’t be broadcast live or even live-to-tape. This is an edited show. Its graphics are very Sportsnet-like, and the links to Sportsnet Connected are very apparent. But it’s also independent, entirely produced locally. The show operates out of City Montreal’s office, which for now is in the Rogers building on McGill College Ave., near offices for Rogers’s French-language magazines. 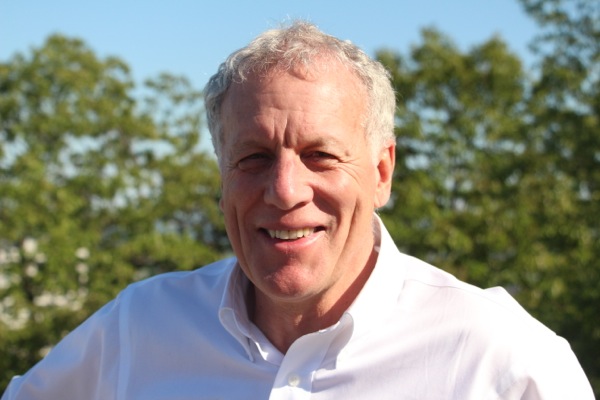 George Athans is the show’s executive producer. He’s the boss of this show. Working under City Montreal executive producer Bob Babinski, he told me he probably wouldn’t have taken this job if it wasn’t Babinski in charge of local programming. Athans is a former world champion water skier, but since leaving the athletic life long ago he’s been producing commercials, corporate videos and other television content with his production company. You might also recognize him as a former CBC Montreal sports anchor.

Athans worked for CBC 25 years ago, and left as Babinski came in, and the two maintained a friendship over the years, Athans said. So when Babinski needed help to launch a sports show, he came to Athans.

“I really thought it was going to be about the last thing that I would get myself back into after doing 16 years of sports at CBC, because it was super demanding and super tough,” Athans said. But the freedom that Babinski had promised him to shape a show that was starting from scratch made it an opportunity worth pursuing.

Athans spoke as someone who wasn’t planning to stay for very long. Maybe a year or two, he said, to get it off the ground and train people to take over after that. 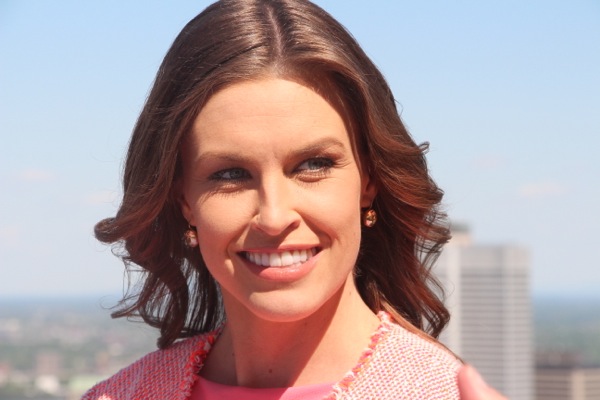 Alyson Lozoff has been Sportsnet’s Montreal reporter since April 2012. Her participation in this show was pretty clear early on. She tells me she’ll still be reporting for the national Sportsnet Connected show, and feels fortunate that much of the work she’s been doing will have a larger audience.

She’s also a lawyer. She was working at a firm with entertainment industry clients when her friends suggested she apply for a job with the Canadiens hosting games at the Bell Centre in 2009. She was in South Africa at the time, but shot a bilingual video of herself on a Cape Town beach and sent it in. The next day, she got a call asking her to come in for an interview. It took a little while to get back from the other side of the world, but she did and got the job. She kept her day job, though.

Then in 2012 some Sportsnet folks visited the Bell Centre to watch her, and offered her work covering a Red Bull Crashed Ice event. They must have liked what they saw, because a month later she was a full-time reporter, covering anything sports-news-worthy in Quebec. 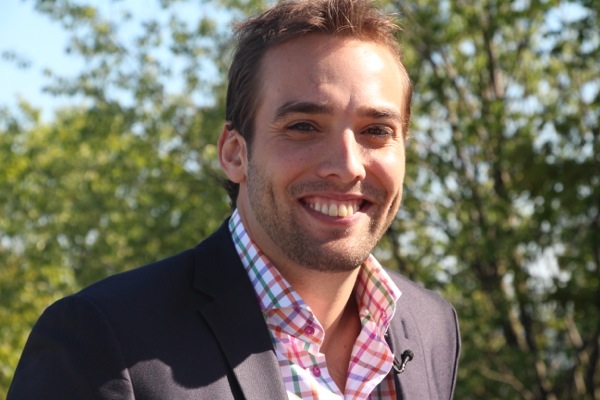 Wilder Weir, like Lozoff, was born and raised in Montreal. The son of former Nordiques player Wally Weir, he played hockey at Queen’s and was a contestant on CBC’s hockey reality show Making the Cut, which aired during the 2004-05 NHL lockout. He got invited to the Florida Panthers’ prospect camp, but that’s as far as he got in hockey. Considering his injuries and the new passion he had developed for television and film, he decided a job in the media was more to his liking.

He worked as an intern and then a segment producer at TSN’s SportsCentre, with no ambition of wanting to be in front of the camera. Eventually that changed, and after two years there he hired an agent and started auditioning, scoring some work on commercials.

His big break came in an unexpected place: A women’s lifestyle television channel. In 2008, Corus launched a Canadian version of Cosmo TV, and its flagship program Oh So Cosmo needed a male co-host to offer a male perspective. “I thought it was going to go 10 episodes,” he said. But it ended up going more than 200 over six seasons.

You can find some of its segments on YouTube.

After the show ended, Weir heard from Scott Moore, the former CBC Sports executive he met while doing Making the Cut. Moore is now an executive at Rogers Media, and suggested Weir would be a good fit for Montreal Connected. 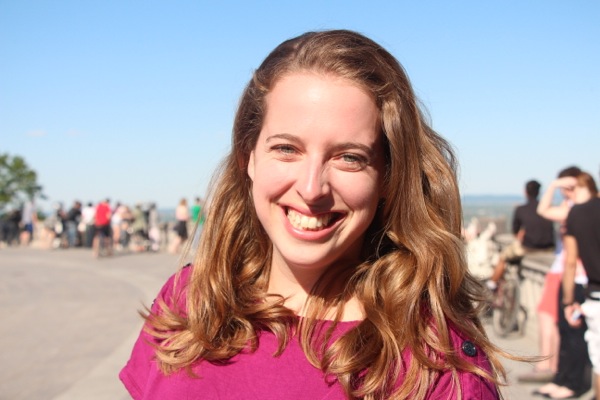 Kelly Greig, a 25-year-old from Ormstown, was hired away from CBC Montreal, where she worked as a producer and researcher in radio. I’d known her because she booked me a few times on CBC’s Homerun show to talk about media (particularly when CRTC hearings came to town).

She had worked as a TA at Concordia, including for a class taught by Bob Babinski, and that led to an interview for this job. She was offered it just before leaving on vacation. When she came back, she quit her CBC job and started working here.

Though her work is mainly behind the camera, she’s getting some face time. The first show features a story she did on local arm wrestlers. 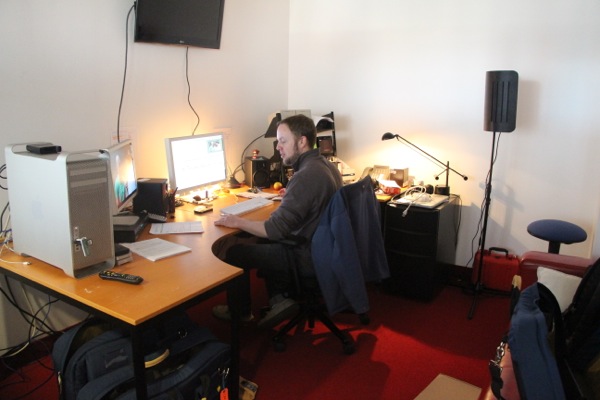 Ian Graham‘s praises were sung loud by Athans and others who work with him. Graham was a freelance cameraman and editor. You can see some of his work here. Now he’s working in this small office with a Mac Pro putting the show together. He gave me a sneak peek of some segments from the first episode, but warned that he hadn’t finished editing them, so I won’t judge their production quality until I see them on TV. 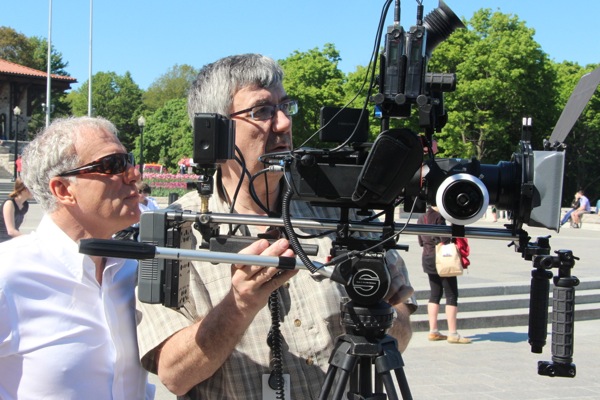 I was surprised, among other things, by the tiny camera being used to shoot the intro segments on Mount Royal. The rig is pretty big, but the camera itself is a small box in the centre: 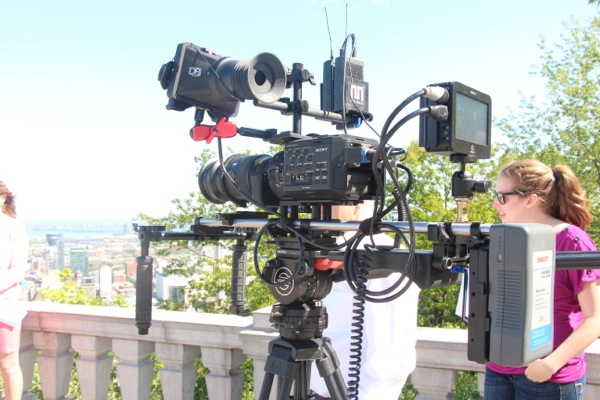 The camera box itself is barely bigger than the lens attached to it. But don’t let its size fool you, that is one super powerful camera. 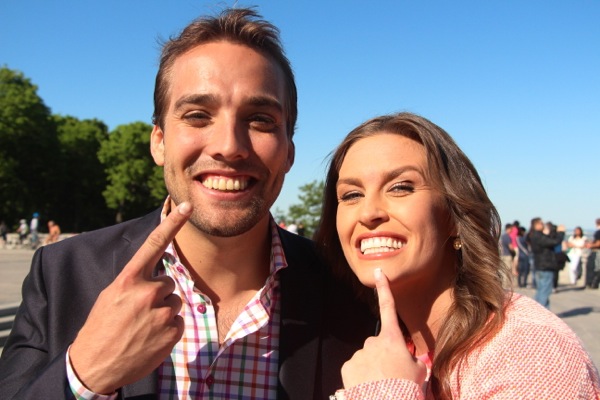 Montreal Connected premieres Thursday at 7pm. It repeats Saturdays at 3:30 and 7:30pm, and Sundays at 6pm. If that sounds like a complicated schedule, it is. Weir needed about a dozen takes to get it all straight.

The show will also soon begin airing on Sportsnet East Saturdays at noon (subject to being jostled around by live sports).