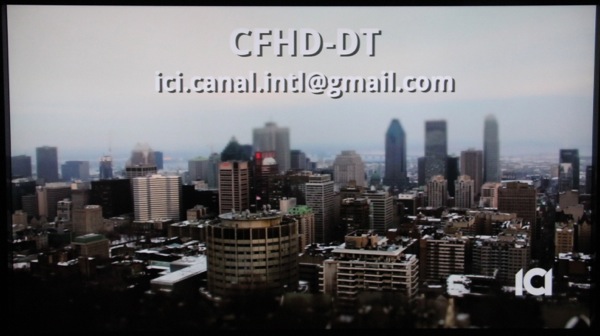 Test signal currently being transmitted by CFHD-DT (ICI) on Channel 47.1

CFHD-DT, which wants to operate under the brand International Channel/Canal International (ICI) but is in some legal trouble with Radio-Canada over that, announced via its Facebook page and its Twitter account that it was on the air as part of its testing phase and would be airing promotional videos soon.

The 5,500-watt signal, broadcasting from a Bell-owned tower near the police station on Remembrance Rd., is showing a partially blurred time-lapse cityscape video, with the callsign, an email address and the station’s logo at the bottom. The signal has no audio.

The station is broadcasting on Channel 47.1 in 1080i high definition.

Station manager Sam Norouzi, who has been very busy the past few weeks, tells me that the station should launch some time near the end of September or early October. Part of the delay is because he needs to coordinate with cable providers Videotron and Bell (Fibe) to ensure carriage on their systems. Because it’s an over-the-air channel, ICI will be carried on both cable systems’ basic packages, without a per-subscriber fee.

Norouzi said there hasn’t yet been discussions with satellite TV services or out-of-market cable systems about carriage, so the station will launch without carriage on those systems at first.

When it does air, ICI will carry programming in 15 languages for 18 ethnic groups, with most of its programs produced by independent groups that purchase airtime and sell their own advertising. He said his family’s production company Mi-Cam Communications, as well as independent producers he’s working with, have hired a lot of freelance camera operators who have been busy shooting footage (including the recent Montreal Italian Week), and “the team is growing every day.”

“It blows my mind the quality of the stuff we’re shooting,” he said. Unlike the kind of stuff seen on CJNT during the Canwest days, programming on ICI will be in high-definition, and have superior technical quality, he said.

ICI is being helped through financial, technical and other assistance from Channel Zero and Rogers, who offered it so that the CRTC would approve Rogers’s purchase of CJNT and its conversion into an English-language station that’s now part of the City network. Rogers is giving the station more than $1 million in funding for programming, and Channel Zero, in addition to providing free master control services for five years, has offered to loan up to $1 million to the station.

Rogers also offered up to 200 hours a year of free programming from OMNI, its ethnic network. Norouzi said at first he didn’t think he’d be using much OMNI programming. Now he says he’s looking at adding three programs from OMNI (but not the daily newscasts).

Norouzi said much of the past few weeks have been spent on technical aspects, including installing the antenna (and having to fix it after it was accidentally dropped and broken during installation). “I’m going to write a book eventually about all the adventure,” he said jokingly.

“In the past two weeks, things have progressed very rapidly.”