The government agency that runs the Olympic Stadium has been active the past few years in trying to modernize it. A new really expensive roof was approved by the Quebec government. The tower was renovated into offices for 1,300 employees of the Desjardins group.

But another plan, to open the roof of the tower as an observation deck, means having to remove several radio transmitters, and the Régie des installations olympiques has given at least one of them an eviction notice.

CHAA-FM 103,3, the community station serving the south shore of Montreal, broadcasts from the Olympic Stadium tower, with a signal directed toward Longueuil. In an application to the CRTC, it says it received a notice in 2016 that it must vacate the tower by Dec. 31, 2017. The RIO later offered a three-year lease because work to renovate the roof was delayed, but that lease contained an option to cut it short with 12 months notice.

On top of that, work currently taking place on the tower has interfered with proper operation of the transmitter, due to all the vibration and dust being created. The station, owned by Radio communautaire de la Rive-Sud inc., finally decided it had enough, and has applied to move the transmitter to the CBC/Radio-Canada tower on Mount Royal, which houses almost every commercial FM and TV transmitter in the market.

The application was published Monday by the CRTC, and is accepting comments until Feb. 19, a shortened comment period the commission agreed to so it could expedite the application process. 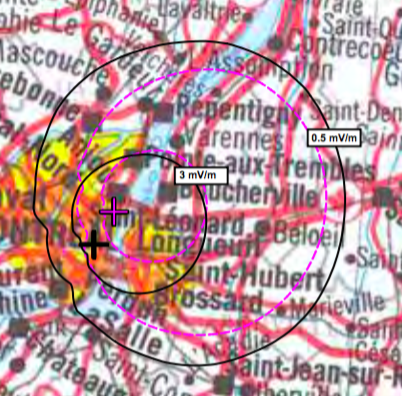 The new transmitter would be higher (284m vs 192m), and slightly more powerful, with a maximum ERP of 1700W instead of 1400W. But its signal pattern would be similar (slightly better toward Brossard and the west), and impacts on nearby stations on the same or adjacent frequencies would be minimal, its engineer asserts.

This move won’t be cheap, though. CHAA estimates a moving cost of $200,000 for new equipment on the new site, and says its rent will double. It’s seeking a loan to cover the costs.

The Mount Royal Antenna is the tallest in Montreal, and the home of transmitters for CBMT, CBFT, CFCF, CFTM and CFJP television transmitters (plus CJNT that broadcasts from a building next to the tower), and CBME, CISM, CKUT, CIRA, CKBE, CBM, CKMF, CBF, CJFM, CHOM, CHMP, CJPX, CBFX, CFGL and CITE FM transmitters, and will soon be joined by CKOI. As a result of its ideal position on top of the mountain, it’s also the most expensive place to put a transmitter, so some stations have used alternate sources, like a nearby Bell-owned tower on the other side of Remembrance Rd. But Olympic Stadium was another option.

Besides CHAA-FM, only one other broadcast transmitter remains on the stadium: CIBL-FM 101,5. And that station is in the middle of a major financial crisis. The last thing it needs is a forced transmitter relocation, even if it had been aware of it for some time.