Election nights are always fun. All hands on deck, at night on the tightest of deadlines, working together to report on the story of the year.

Each medium has its own challenges, but TV has the highest stakes. Everyone’s watching — including the politicians — and seconds count. Make an early call that turns out to be right, and you get supreme bragging rights. Get it wrong, and you’re a laughingstock. And you have to fill hours of programming, usually without even the benefit of a commercial break.

I checked in with all of them on election night (though I was busy with helping put out a newspaper), and reviewed recordings of the four English networks after the fact. (I’ll leave it to my francophone colleagues to review how RadCan and TVA did.) Here’s how they did: 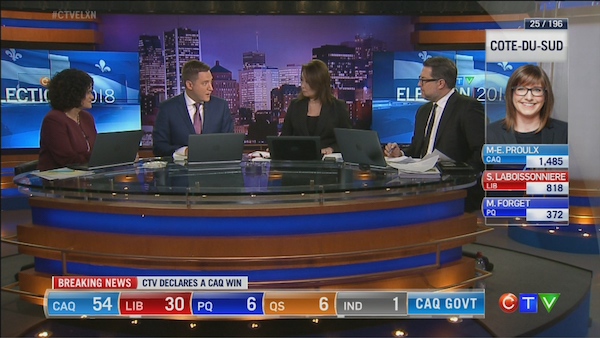 CTV’s big win was in being the first to declare a CAQ “win” or “government” (ignoring the fact that, in a minority situation, having the most seats does not guarantee a party forms the government) at 8:08pm, six minutes before TVA and 11 minutes before Radio-Canada. 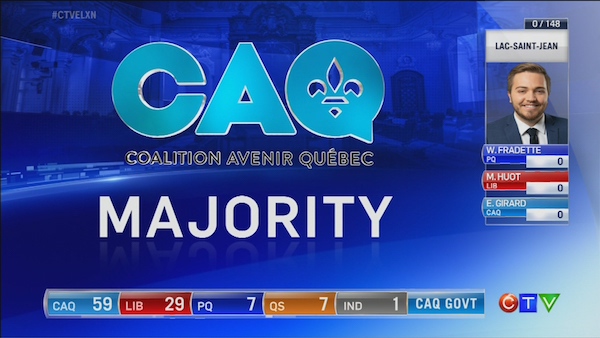 On the more critical call of whether it would be a majority government, the networks were much closer, with TVA out first at 8:33pm and CTV and CBC/Radio-Canada matching within two minutes. 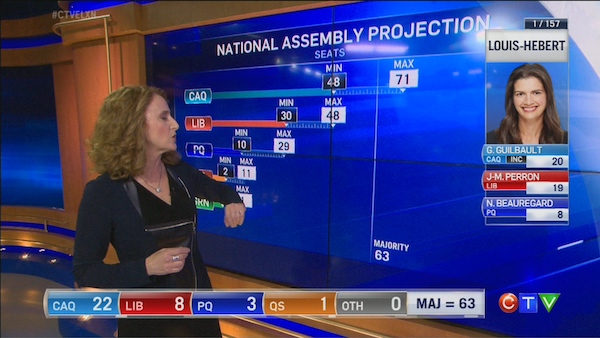 Tarah Schwartz with the maximum and minimum projected seats. Note that the CAQ and PQ ultimately fell outside these ranges.

Since CTV got to crow about the speed of its election prediction (even getting an interview in the Gazette), it’s worth noting that its projections were not totally accurate. Here we see an early chart showing the CAQ with a maximum of 71 seats and the Parti Québécois with a minimum of 10. In the end, the CAQ won 74 and the PQ nine, slightly outside these ranges. 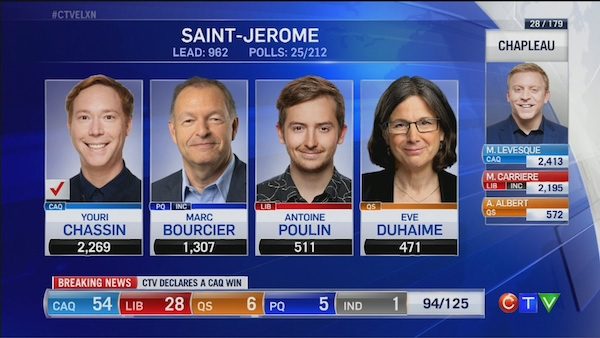 Results for an individual riding.

Graphics-wise, CTV was heavy on the rectangles, and consistent with past election nights kept a graphic on the right cycling through various ridings. Percentages, in addition to raw vote counts, might have been helpful, and the party affiliations could have been bigger, but overall it was pretty clear. 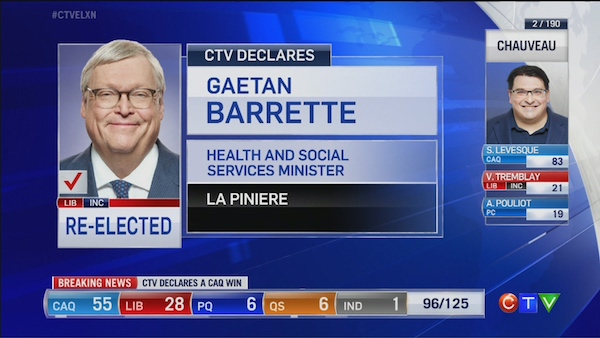 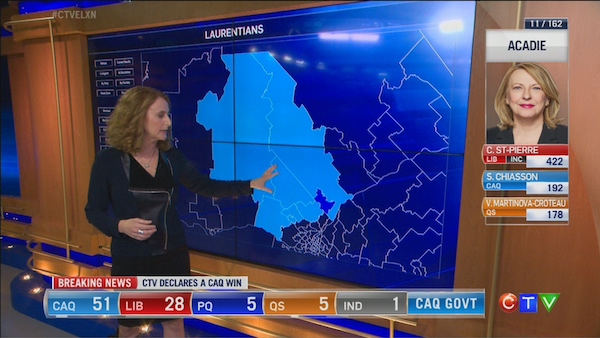 And maybe consider avoiding dark blue as a default background to avoid confusion on maps like this.

For analysis, there were two panels — one at the main anchor desk and one at the secondary desk on the other side of the studio. Add on Tarah Schwartz at the big wall and reporters on location with the parties, and it was pretty comprehensive. 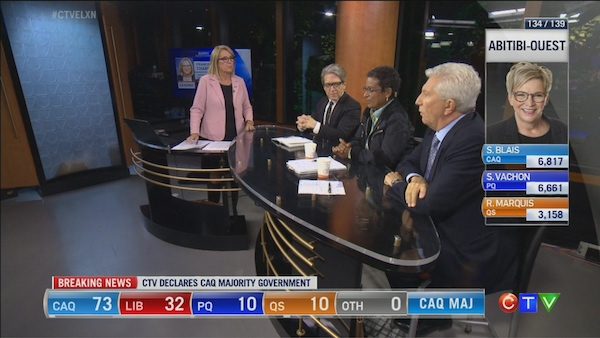 I still find it weird that Gilles Duceppe spends his election nights doing analysis for CTV.

CBC livestreamed its entire special on YouTube so you can rewatch it there if you want. 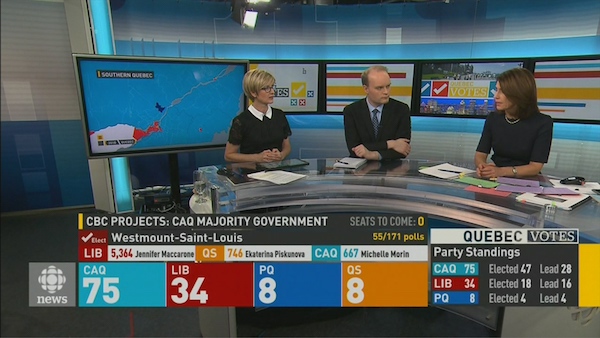 Like CTV, CBC’s coverage was pretty conventional. One anchor/analysis desk instead of two, but plenty of reporters in the field. And they also played with the magic walls, that seem to be the new thing on election nights. 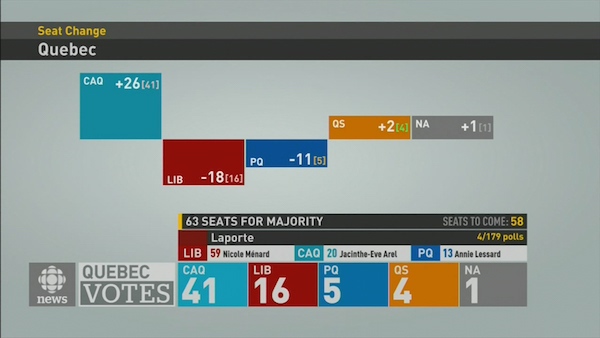 A graphic showing seat changes since the last election. 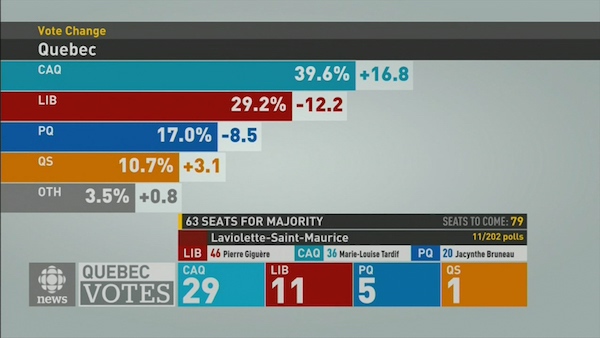 A graphic showing vote change compared to the last election.

While CTV’s graphics are busy with lots of rectangles and gradients, CBC’s are very simple with solid colours. CBC tried to cram in more numbers and statistical information, to mixed results as far as I was concerned. Some numbers tell a story clearly, others feel like a spreadsheet you have to further decode in your brain. 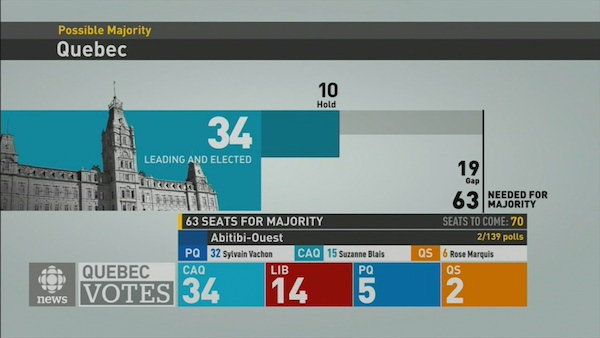 A graphic showing the “path to majority” of the CAQ. 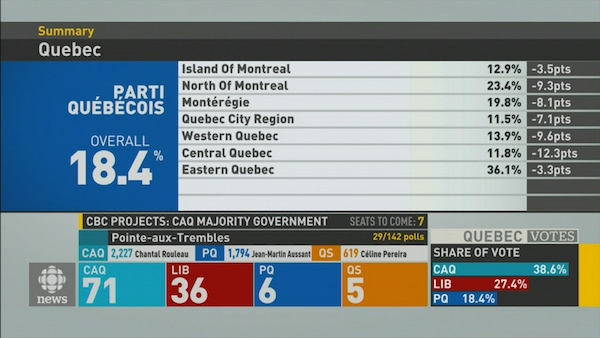 A graphic showing regional breakdown of a party’s support.

CBC had two magic walls, with Nancy Wood on the left and Sean Henry on the right, and without a panel of ex-politicians giving their two cents, they had more time to crunch the numbers. 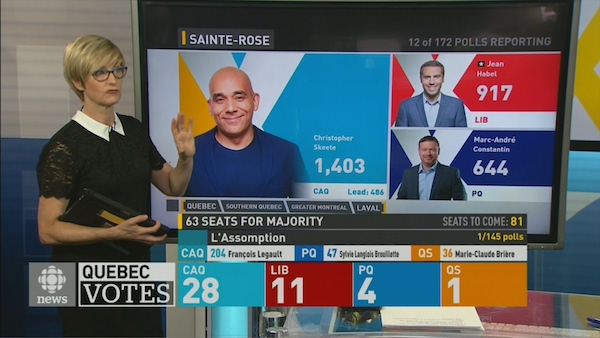 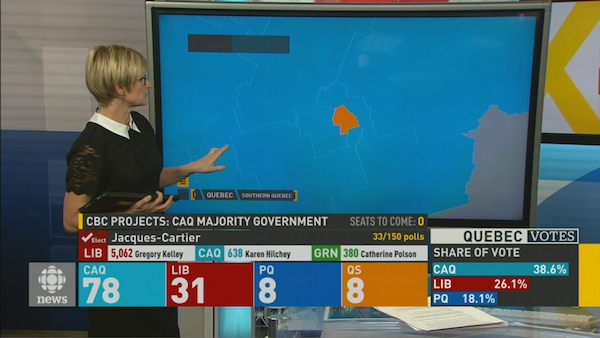 Nancy Wood with one of the giant screens showing a QS lead in Sherbrooke amid a sea of CAQ seats.

Overall, CBC put its focus where I think viewers wanted it more: in raw results, reporter analysis and on-the-ground interviews with the candidates. No complaints or major hiccups to signal, so I’ll just say congrats and move on. 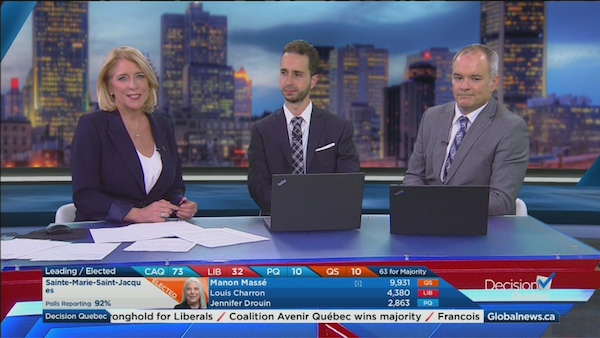 Global didn’t cut into its primetime (and under its current centralized control room setup I’m not even sure if they could if they wanted to), so it was left to a wrapup at 11pm. And because they didn’t want to preempt Stephen Colbert’s Late Show either, it was cut off at 11:35. That was enough to get a few minutes of François Legault’s victory speech, a couple of on-the-ground live hits and some analysis, but not much else. 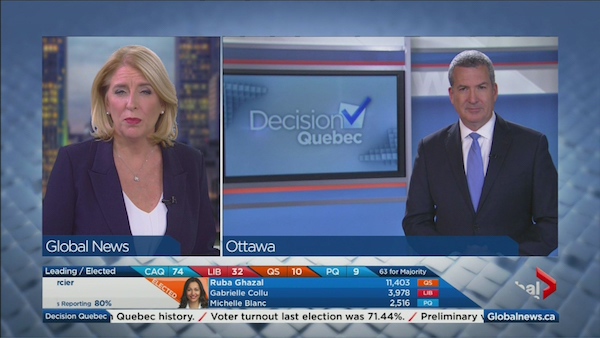 Election nerd extraordinaire David Akin was made available to do analysis from Ottawa, but didn’t get much airtime before they cut to Legault’s speech. Without simultaneous translation, it was up to Orchard to try to do some amateur live translation, which went on for about three awkward minutes until they cut Legault off to go to commercial. 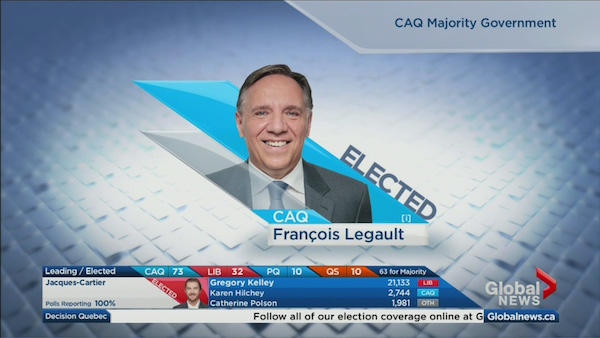 Graphic declares Legault elected. To something. 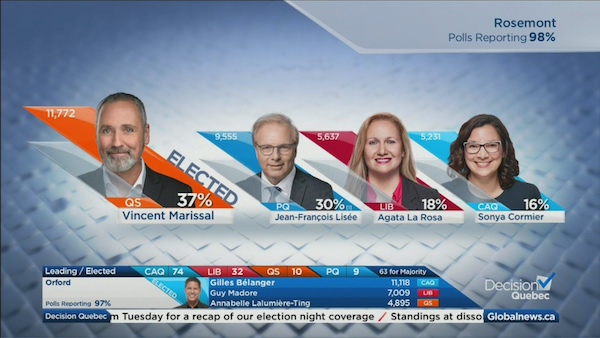 While the other networks like their rectangles, Global’s election graphics are heavy on the sharp-angled parallelograms. It gives it a more … edgy look with some nice transitions.

The lower-third graphic cycling between ridings was informative though not the easiest to read because of the small type size. 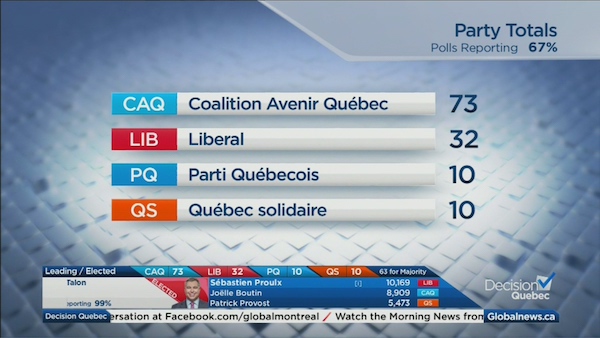 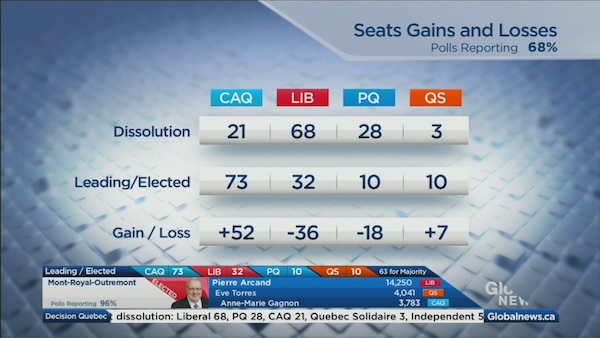 One thing I will give Global credit for is a bit of looking ahead. The panelists discussed potential picks for key ministries, accompanied by graphics with their headshots. 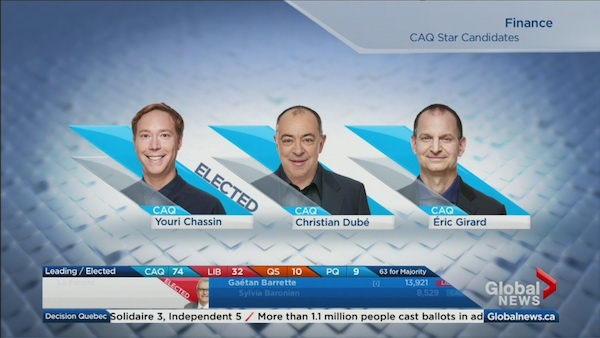 But overall, with only 35 minutes and interrupted by commercial breaks, there just wasn’t enough meat here. The graphics were nice, but otherwise Global’s lack of resources was clearly evident. 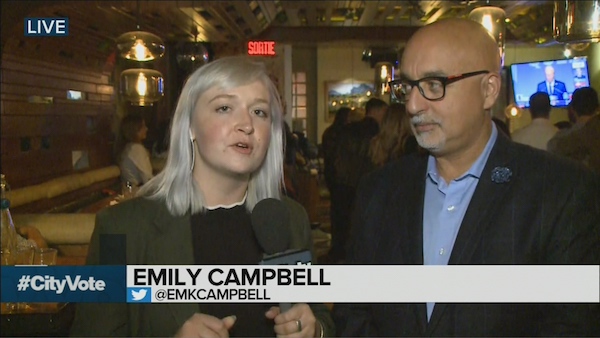 Consistent with its anchorless philosophy, CityNews Montreal didn’t have an anchor desk with magic walls and a big production. Instead, it just jumped right into reporter Emily Campbell on location getting analysis. And it probably would have been interesting analysis if it wasn’t at a bar blaring Jean-François Lisée’s speech, making the interview almost unintelligible. 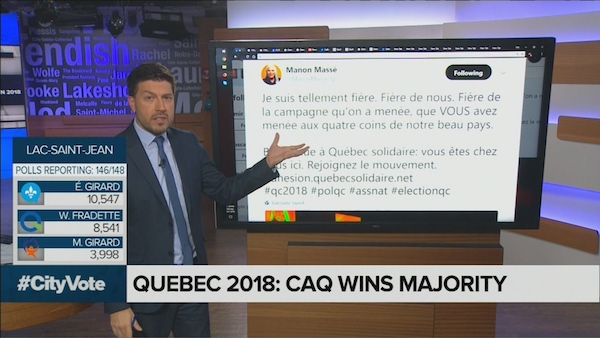 Elias Makos was the closest thing this newscast had to an anchor, and he spent time reading tweets from the leaders and presenting some information he found on Wikipedia and Le Devoir’s election results page. He was also the one who had to stretch for time as they waited for Legault to get on stage and speak — he filled airtime alone for five whole minutes as Legault shook hands before they finally went back to Campbell to fill the rest. 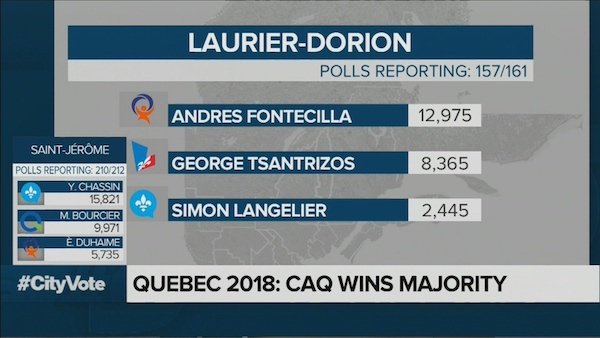 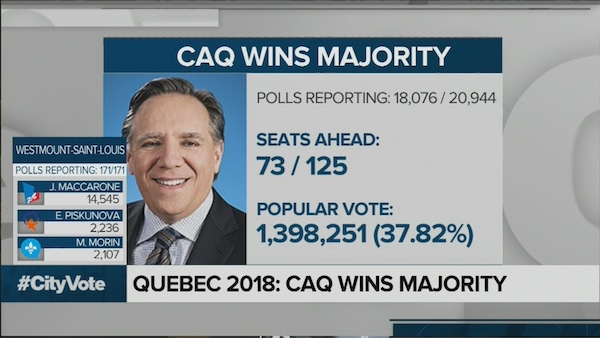 Graphics-wise, it was simple. No headshots or percentages or indication of incumbency, just the top three candidates in each riding, their vote count and party, and the number of polls reporting.

A test run might have showed that the left-side bug overlapped several full-screen graphics in an awkward way.

Overall, the newscast made full use of the three journalists it had — Campbell, Makos, and Tina Tenneriello at the Quebec Community Groups Network — but covering an election night with only three journalists is remarkably insufficient. City’s strength is in Breakfast Television in the morning, which isn’t included in this review, and its newscast is only a month old, but this isn’t going to win over any viewers compared to the other networks.

Covering a provincial election for an English-language TV network isn’t easy. It’s nowhere near a money-making operation because of the huge additional expense (just putting journalists on buses following the leaders is very expensive) that isn’t compensated with increased advertising revenue because the parties don’t consider anglophone votes a priority. And because the networks have only one TV station in Quebec, there’s little sharing of resources that could reduce costs.

Despite this, CTV and CBC did a solid job on their election night specials. Global and Citytv can best be considered compromises, with a small staff doing the best they could. But in the TV business the best you could isn’t a win.