The Coopérative nationale de l’information indépendante, the group that took over the six regional dailies formerly owned by Groupe Capitales Médias, has decided to suspend daily print editions and keep only the Saturday edition of each of those newspapers as they face a sudden disappearance of commercial ad revenue.

They’re also laying off 143 workers, almost half their staff, temporarily during this crisis.

And no refunds “for the moment” because they don’t have enough staff to handle that.

This, less than a month after the group said it expected to be profitable in two years.

It’s just the latest media outlet to have to make drastic measures as COVID-19 causes traditional advertisers to pull their ads in what BuzzFeed’s Craig Silverman calls a “media extinction event.”

Among the dramatic changes in Canada:

If the crisis continues over the long term, the situation is likely to get worse.

It’s a perfect storm of problems:

There are some effects working in the other direction — higher audience for news content, some virus-related government advertising — but the impact on the bottom line is very negative.

Governments have acknowledged this, and in Quebec at least, we may see some additional direct financial assistance to the media. Unifor is calling for emergency measures from the federal government, and it looked like they listened, with Justin Trudeau announcing new measures would be coming, but that turned out to be false.

So for now, the guillotine continues to fall day after day.

UPDATE: J-Source has mapped out how the COVID-19 pandemic has affected media across the country.

Local news is vital. It provides an essential service, especially in times of emergency. People rely on local broadcasters to provide them up-to-the-minute information told by local journalists.

So what does the CBC do during an unprecedented public health crisis? It shuts it all down.

The public broadcaster announced Wednesday that effective immediately it is “consolidating” its TV news coverage, and replacing the 6pm and 11pm local newscasts at all of its stations (except CBC North, which provides news in Inuktitut) with CBC News Network.

According to a memo sent to staff this morning, the decision was made because of a lack of staff at CBC’s Toronto Broadcast Centre, which handles master control (why it has a lack of staff is not explained), as well as “much stricter newsgathering protocols.”

END_OF_DOCUMENT_TOKEN_TO_BE_REPLACED 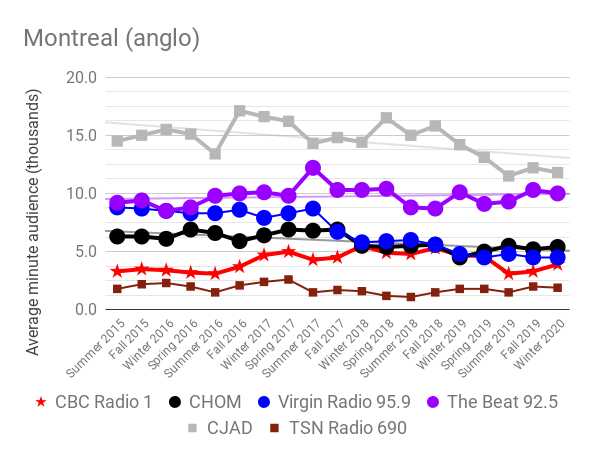 Numeris has released its top-line PPM ratings data for Nov. 25 to Feb. 23.

The numbers for Montreal show little change from the previous quarter, or the past few years, really, with CJAD at the top among anglophones and CHMP-FM 98,5 ahead among francophones.

This lack of change is bad news for Virgin Radio 95.9, which spent a lot of effort promoting its new morning show hosted by Vinny Barrucco and Shannon King. We’re two full quarters into this change and The Beat still has twice the audience of Virgin. The sacking of program director Mark Bergman (who’s now at The Beat) and Freeway and Natasha haven’t moved the overall numbers.

The Beat, CBC, CHOM and TSN 690 have kept about flat over that time, and haven’t shown any major change this winter.

On the francophone side, Rythme FM is continuing to re-establish itself as the dominant music station after facing more competition from Rouge, and 98,5fm is holding off Radio-Canada.

Meanwhile, in Toronto, TSN 1050 finally beat Sportsnet’s 590 The Fan with its morning and afternoon shows (among men 25-54 anyway), which Toronto Sports Media notes has a lot to do with how unstable The Fan’s lineup has been.