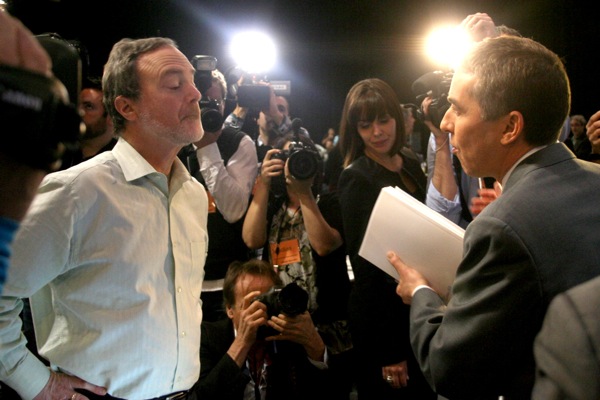 Just like last year, The Globe and Mail came out with the longest penis at the National Newspaper Awards gala Friday night in Montreal. Canada’s national newspaper won six awards out of 13 nominations, followed by the Toronto Star (4) and La Presse and the Hamilton Spectator at two each. Seven other papers (including The Gazette) and Canadian Press each picked up a single award.

The Gazette won in the sports category for a column by Red Fisher on the retirement of Patrick Roy’s No. 33 jersey, specifically his unpopular opinion that it shouldn’t be retired. It was also nominated for a short feature by city hall reporter Linda Gyulai on traffic cones.

La Presse’s André Pratte won again in the editorials category, and Julien Chung and Philippe Tardif won in the presentation category, where the paper was nominated twice. La Presse had eight nominations total.

So let the bragging begin:

The Winnipeg Free Press was the only newspaper with multiple nominations (two) to be shut out of the winners category. Their story makes it clear they were hoping for something more.

And the winners are…

Winners in the cartooning and photography categories are posted on the NNA website.

The blogosphere is abuzz with the story of Jeff Gerstmann, who was fired from GameSpot after a negative review of an advertiser’s video game. The company that owns GameSpot insists that this was not the reason for his firing, but neither side will comment on the real reason, hiding behind laws that apparently prevent that.

Closer to home, La Presse chief editorialist André Pratte paid a visit to Francs-Tireurs this week (Part 1 of the interview deals with his views on sovereignty in case you’re interested). In it, he says there’s no “red phone” from the bosses to tell him what to write. However, the paper has an editorial viewpoint, and its opinions follow that.

Over the years, Big Media learned that it’s in their best interest to separate advertising from editorial content. Otherwise, readers wouldn’t trust them and would move on to competing papers.

But while many still follow that mantra officially, various methods have come up for advertisers to influence the editorial process that news media have accepted don’t cross the line:

When Pratte says there’s no red phone by his desk, I believe him. Big Media publishers and owners are simply too busy making money to care about micromanaging the day-to-day news decisions of their media properties. They have other people hired to do that. It’s very rare that an order comes from the very top that seriously affects journalistic integrity. And when it does, there’s usually a backlash.

So pressures become much more subtle. Advertising is the biggest source of revenue for almost any media operation. They know that it’s hard to exist without it. And so they justify the blurring of the line between editorial and advertising as a necessary evil to stay alive.

Some even call it “innovative.”