In 1995, a young francophone studying communications at the University of Ottawa set his sights pretty high: like just about every other francophone journalist wannabe in Canada, he applied for an internship at La Presse.

They turned him down.

He was pissed. How dare these bastards say no? Once he could understand, but twice? Either that newspaper is run by clueless managers, unable to see greatness before their very eyes, or this kid wasn’t nearly as good as he thought he was. Clearly, to him, the former had to be true.

So instead, he began small. A researcher for Radio-Canada in Ottawa. A journalist for a community weekly in Hawkesbury, Ont. The next year, he began working at Le Droit, the francophone paper in Ottawa.

In 1999, a recommendation from a journalist friend got him an interview at the Journal de Montréal. It’s not La Presse, but the largest francophone newspaper in North America is certainly a step up.

The interview was very serious. He had to bring in clippings of his work and show them to the group of managers who were judging him for employment. And he had a few good, serious articles with him. But knowing the Journal’s reputation for, as the French call it, “faits divers”, he tailored his application to that target audience, and rearranged his clippings to put a less serious story first. It was a story he did for Le Droit about a child getting bitten by a dog. The headline: “Circoncis par un chien” (I imagine the details are self-evident).

When his interviewers turned their pages past his CV to see that headline, they started laughing. He was hired as a reporter. 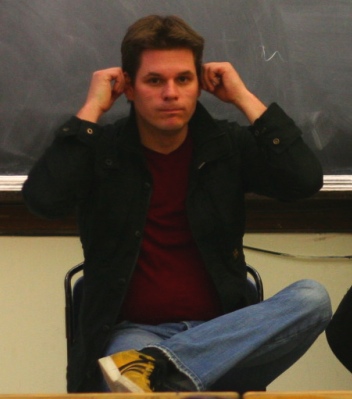 END_OF_DOCUMENT_TOKEN_TO_BE_REPLACED

I just saw more of Patrick Lagacé‘s ballsack than I’m really comfortable with.

No wonder les Francs-Tireurs is seen as a cesspool of homoeroticism.

UPDATE: A source with intimate knowledge of Patrick Lagacé’s ballsack tells me he was thinking about me the whole time he shot this wrestling scene with Richard Martineau. That’s … creepy.

The blogosphere is abuzz with the story of Jeff Gerstmann, who was fired from GameSpot after a negative review of an advertiser’s video game. The company that owns GameSpot insists that this was not the reason for his firing, but neither side will comment on the real reason, hiding behind laws that apparently prevent that.

Closer to home, La Presse chief editorialist André Pratte paid a visit to Francs-Tireurs this week (Part 1 of the interview deals with his views on sovereignty in case you’re interested). In it, he says there’s no “red phone” from the bosses to tell him what to write. However, the paper has an editorial viewpoint, and its opinions follow that.

Over the years, Big Media learned that it’s in their best interest to separate advertising from editorial content. Otherwise, readers wouldn’t trust them and would move on to competing papers.

But while many still follow that mantra officially, various methods have come up for advertisers to influence the editorial process that news media have accepted don’t cross the line:

When Pratte says there’s no red phone by his desk, I believe him. Big Media publishers and owners are simply too busy making money to care about micromanaging the day-to-day news decisions of their media properties. They have other people hired to do that. It’s very rare that an order comes from the very top that seriously affects journalistic integrity. And when it does, there’s usually a backlash.

So pressures become much more subtle. Advertising is the biggest source of revenue for almost any media operation. They know that it’s hard to exist without it. And so they justify the blurring of the line between editorial and advertising as a necessary evil to stay alive.

Some even call it “innovative.” 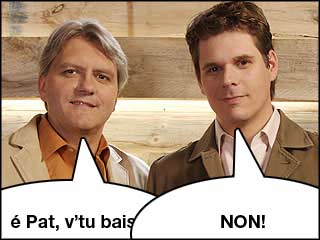 Patrick Lagacé wants to make it very clear that he and fellow Franc Tireur Richard Martineau don’t live together and aren’t attached at the hip.

Which is surprising to me because that show always seemed to have homo-erotic undertones, what with their matching wardrobe and the way they goof around together.

Anyone up for writing some Lagacé/Martineau slash fiction?