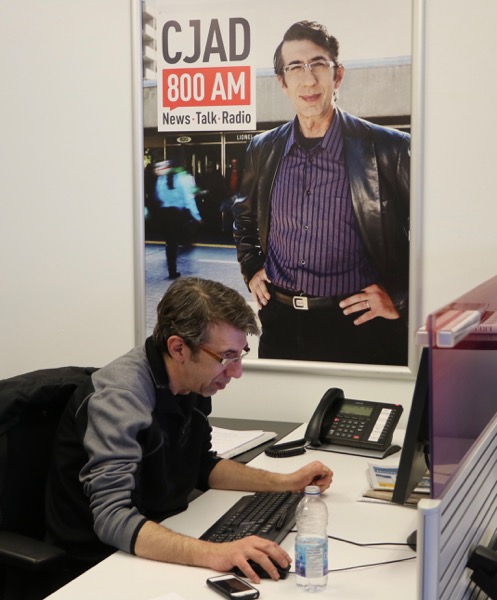 Barry Morgan (and soon posters of him as well) are no longer with the company.

The headline on CJAD’s website is that Tommy Schnurmacher is moving to afternoons and reducing his schedule to an hour a day.

But the real story, not mentioned at all in that article, is that Barry Morgan, who hosted noon to 3pm weekdays, has been let go. His name and photo disappeared from the station’s website over the weekend, and Ken Connors has been moved to his time slot this week to fill in.

Roberts resigned from the anchor chair at Global Toronto last year after a Toronto Star investigation found that he owned a PR firm and his clients were appearing on his show without any disclosure. CJAD’s story about Roberts’s hiring makes no mention of this, but it does note that Roberts’s father and grandfather all worked for CJAD.

CJAD program director Chris Bury tells the Gazette’s Bill Brownstein that Roberts has served his time outside the industry:

“That happened nearly two years ago and he was out of the industry for a spell, but he has moved on, and we’re moving on. We’re turning the page. There is absolutely zero reason to be concerned about that issue going forward. Leslie has been so transparent about it all, so above board, in order to have a clean slate going forward.”

Asked whether Roberts still has ties to BuzzPR, Bury said he “no longer has a stake in any PR company. And, as with anyone on the station, we insist that any potential conflict of interests be declared and we manage them proactively.”

Hall was hired by CJAD from The Beat just last month to co-host the 8pm show, renamed The Night Side. Her first job in radio was at 940 AM (940 News) after winning a contest.

Jon Pole, who hosted The Night Side Mondays and Tuesdays, will take over Hall’s shifts the rest of the week, at least for now, Bury said. “We don’t have anything finalized but I’m a huge fan of his creativity and drive.”

Schnurmacher’s hour-long show is being billed as a way for him to reduce his schedule so he can focus on other projects. He’ll be bringing his Gang of Four with him to his new time.

Station management had no comment about Morgan’s departure and Morgan himself could not be reached for comment. But Bury told Brownstein that “I wish him the very best. The industry is constantly evolving, and sometimes that means making hard choices.”

Morgan has been at CJAD for decades, as a sports reporter and eventually upgraded to evening and then afternoon host. Schnurmacher just marked 20 years at the station, most of it in that 9am to noon time slot.

UPDATE (Nov. 26): Brownstein interviews the new daytime lineup, starting with Roberts, who says he takes “I accept full responsibility” for his mistake at Global.