Ever hear of this guy Claude Vorilhon? He’s a crazy former race car driver wannabe who decided to start a religion centred around him because he thought he saw aliens. Apparently part of this religion requires gaining as much media attention as humanly possible, which saw increasingly ridiculous stunts culminating in the announcement that the group had cloned a human being in 2006. Of course it was complete bull, but the media bought it anyway. I’m hopeful that they’ve learned their lesson because we haven’t heard much from the Raëllians since. 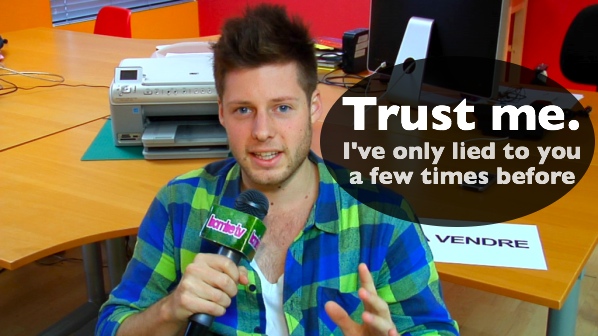 Second on the list of ultimate attention-grabbers is Bombe.tv’s Jeff Lizotte, aka Jeff Lee. And his ethics aren’t much better. In August, he put up a hoax video about a Teletoon van being stolen. It turned out to have been a publicity stunt for Télétoon’s fall launch. Last month, he faked another video about using an iPhone to steal a Bixi.

Now, his latest pathetic stunt is offering to sell his Facebook profile photo (for a week) for $1,000. And the media have been eating it up: Patrick Lagacé, Dominic Arpin, Patrick Dion, Urbania, Salut Bonjour. They use the stunt to discuss an apparent larger issue of how much of our lives we’re willing to sell for advertising interests, but only Lagacé mentions the fact that Lizotte is a hoaxter.

This morning comes word that the campaign was successful, and some sucker marketing company will own his face for a week starting Monday.

Yeah, I realize that by writing this I’m giving this douchebag exactly what he wants: more attention. I wish there was some way to avoid that. And maybe I’m stating the obvious to some people. But I can’t ignore it when someone uses lies to manipulate the media (and social media) for selfish purposes and isn’t called on it. Jeff Lizotte is a serial liar. It’s time we stop taking what he says at face value.

So please, ignore him. Unfriend him on Facebook, stop following him on Twitter, remove Bombe.tv from your RSS reader. Send a message that you won’t be manipulated to service his ego. But most of all, don’t believe anything he says that sounds newsworthy, because it’s probably not true.

At least Raël’s desperate publicity stunts come from some delusional sense that it will eventually bring peace to the world. 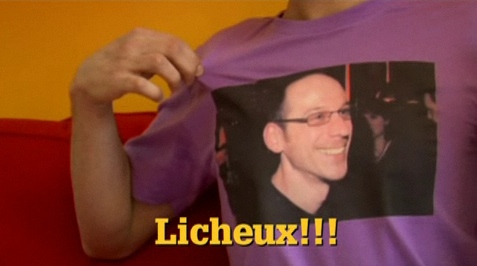 Dominic Arpin on a T-shirt (Bombe.tv)

I was just reading a post on Dominic Arpin’s blog about how he noticed a picture of himself in a video on Bombe.tv (click on “Les infos”). It’s silly, but we bloggers are a vain group sometimes, we love talking about how other people are talking about us.

It’s cute, a picture of Arpin being made into a T-shirt. But something seemed familiar about the picture. It looked similar to one I’d taken of him at a YULblog meet last year. 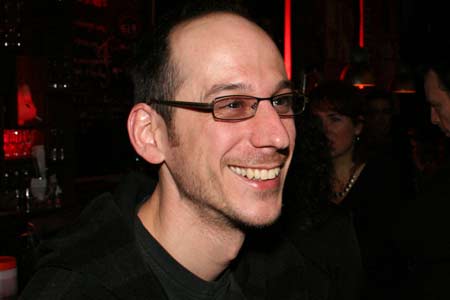 The original photo from my blog

In fact, it’s the same photo, apparently taken through a Google Image search. Needless to say, they’ll be hearing from my lawyers soon.

Oh wait, I don’t have any lawyers.

Well that’s ok. My outrage is tongue-in-cheek anyway. People can do what they want with my stuff for personal use (you know, build a shrine to me or something). So long as they’re not selling them I’m OK with it. But would some credit have hurt? At the very least they could have asked me for a high-resolution version instead of taking the 450-pixel wide one on my blog.

I could have even given them the non-cropped version: 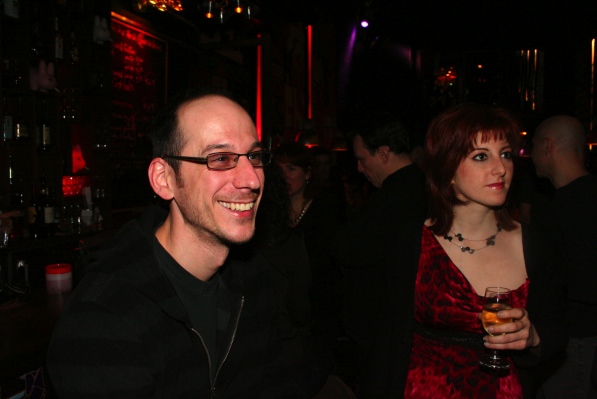 Of course, it’s really Arpin that makes the photo with his adorable little smile there.

Maybe I should make some T-shirts out of it. I could make a career out of printing T-shirts of Quebec blogger celebrities.