Numeris released radio ratings for diary (read: medium-size) markets recently. You can read the top-line details here, or get some deeper numbers from Bell Media Sales for stations in Quebec.

Among things of note:

In June, Cogeco Diffusion announced that it would take three stations outside Montreal using the CKOI brand and turn them into talk stations similar to CHMP 98.5. Three months after the changes took effect, we have our first publicly-available ratings data for two of these stations.

On Thursday, BBM Canada released top-line radio ratings for diary markets (PDF). Diary markets are those that measure ratings through the use of diary surveys of listeners, asking them to fill out forms saying what they listened to. They exclude the five largest markets (Toronto, Montreal, Vancouver, Edmonton and Calgary), which have switched to the Portable People Meter, an electronic device that logs what people actually listen to. PPMs are more expensive, but more accurate.

The BBM diary survey data gives us snapshots of markets including Quebec City, Sherbrooke and Ottawa/Gatineau, the latter in both French and English. Cogeco has a talk station in each of these metro areas.

In Sherbrooke (CKOY-FM 107.7) and Gatineau (CKOF-FM 104.7), the stations both saw ratings boosts compared to this spring and a year ago.

Sherbrooke’s CKOY has an 8% market share, which is actually last-place among metered commercial stations in the market now that CJTS-FM has been shut down. But that number is up from 6.6% a year ago, 4.9% in fall 2010 and 5.2% in fall 2009.

The third former CKOI station, Trois-Rivières’s CKOB-FM 106.9 didn’t do as well, according to Astral’s BBM analysis. It lost ground overall, and particularly among young adults and women. But among adults 25-54 (the key demo), it’s about where it was a year ago – in last place.

In Quebec City, where Cogeco already had a talk station and the CKOI-branded station there was sold to an independent company when Cogeco bought Corus, the numbers also look good for talk radio. Controversial talk radio station CHOI-FM, which had been as far down as fifth and sixth place in the market in 2009, is now the top-rated station in the market with a 15.9% market share. Cogeco’s Quebec City talk/rock station CJMF-FM (FM93) is in third place, and its 14.7% market share is its best since at least 2009.

The Journal de Québec has some details of the Quebec City market.

Combined with data showing that CHMP in Montreal keeps getting higher ratings, it’s clear that there’s a pattern here, and the switch from music to talk has had some (at least modest) success in terms of ratings.

Radio-Canada was also crowing about these numbers. In Ottawa/Gatineau, Radio-Canada’s Première Chaîne had a reach exceeding 100,000 listeners for the first time ever. (Reach is defined as the number of people tuning into a station at least once a week.) It also breaks down some numbers for each of its shows.

Lots of broadcasters issued their own statements on their ratings numbers, including for many small markets that BBM doesn’t give numbers for directly. Here’s a few I’ve found for Quebec’s diaried markets:

Other less biased analysis by market: 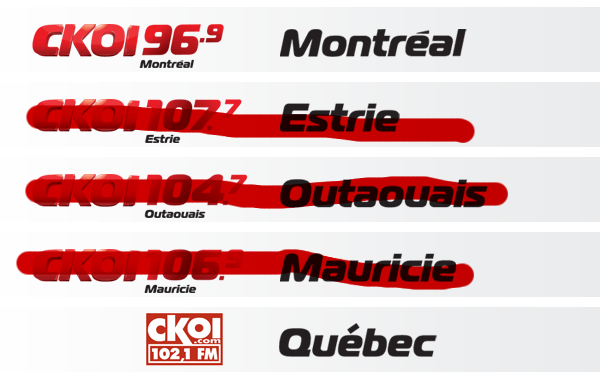