I have, in the past, been critical of amateur bloggers following pro sports teams. Particularly in the wake of the success of my employer’s Habs Inside/Out website, I just couldn’t fathom how people without access to the team and with daily jobs that might affect their posting schedule could ever really hope to compete for news. Even analysis, it seems, hasn’t been very convincing (though people talking out of their ass about what players the Canadiens should sign and what lines they should put them on is a problem in just about every medium).

But while many of these blogs are long gone from my RSS reader, one is proving me wrong. Four Habs Fans is reminding me that if you can’t be informative, you can at least be funny: 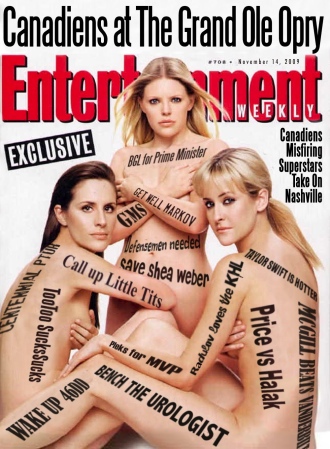 It’s not perfect – they use acronyms for nicknames that makes it hard to follow if you’re new – and it’s rather sexist with the scantily-clad women (not that I … uhh … pay attention to the hotties or anything). But this Photoshop job alone has me singing its praises now.

Okay, maybe not singing. But I’ll offer them a lap dance.

Meanwhile, HIO’s Mike Boone – who also relies more on humour than original breaking news or analysis to create a following – is offering to liveblog Habs games from the home (or bar) of just about anyone with an HDTV and WiFi.

In November, The Gazette’s Canadiens blog Habs Inside/Out launched a guest-blogging section in which they brought in four contributors whose only real expertise was that they were hard-core Habs fans and loved to write about it. Three of the four, in fact, blog about the Habs on other blogs.

Called the Other Wing, it’s a place devoid of news but filled with amateur analysis of the Canadiens. (I use the term “amateur” in a technical sense of unpaid non-expert, not in any derogatory Christian-Bale-like way.) Though the opinions don’t come from with any background of insider knowledge, they’re still well read because hard core Habs fans are insatiable information wolves who will stop themselves in the middle of sex to find out who’s in nets for the next game. Just look at the number of comments on Mike Boone’s liveblogging and other posts from a fan’s perspective.

This week, one of the more active contributors to the Other Wing quit, posting a final post in which she said that she couldn’t continue writing for free for a for-profit media outlet and a website that is getting millions of hits a month:

I write here as an unpaid volunteer, and I’ve been having some serious second thoughts about what that means for others. … In an age when my professional colleagues in the newspaper business are struggling to keep their jobs and keep their papers viable, a site like Inside/Out could be an important source of work for them. Therefore, I believe it’s wrong for me to undermine the work they depend upon for their livelihoods by providing content for nothing.

The contributor, Leigh Anne Power, is herself a paid journalist. She’s co-host of the CBC Radio morning show in Central Newfoundland, which makes note of her Habs fandom. And she blogs (for free) about the Habs on her own blog.

The post prompted quite a bit of reaction, including some argument over whether such contributions should be paid or not. One commenter who agreed with her even wrote a blog post of his own blasting Canwest and Boone (who’s on staff at the Gazette and so paid for his work – though he does sacrifice quite a bit for this labour of love).

I won’t comment on the merits of the argument since the website is run by my employer, but I’ll point to some arguments on both sides of the equation, taken from the comments attached to the post (it’s worth a read to see other opinions on the subject).

As long as the gazette is profiting from this site they should pay their contributors. Anything less is exploitative.

I don’t provide other media outlets with free content because that’s undermining my profession and preventing me from actually getting a paying job in the industry. Did you know that when you submit photos or comments to news sites, that outlet owns them at perpetuity and can reproduce them in more or less any shape or form… for ever… without EVER paying you? Even if your pic spearheads a national ad campaign that ends up bringing in a whole lot of money.

One thing you are perhaps undervaluing regarding providing free content to a media outlet like the Gazette is the exposure you receive. Blogs are a great way to express one’s opinions, build a portfolio, etc. But a blog that receives no traffic is not as useful as one that does. One way to build a reader base, as we have commonly seen here at this website, is to contribute a lot of thoughts and comments to a “mainstream” site while also linking to one’s own blog. Readers that like your comments will want to read more, especially if that contributor slowly begins to scale back their input to the mainstream site.

So what do you think? Is this journalism? Should these contributions be paid? Is Habs Inside/Out building a community or profiting off of it? 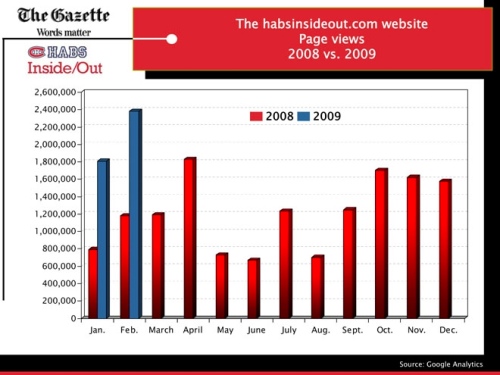 Habs Inside/Out, my newspaper’s most successful online venture so far, is seeing 100% traffic increases over last year, according to a recent post from Mike Boone. Those kinds of numbers put all of their other blogs (and mine) to shame, but they are well-deserved because of the efforts put into it by Boone, Dave Stubbs, Kevin Mio and Pat Hickey, who all contribute to bringing breaking news to the site in addition to their day jobs for the newspaper.

The immensely popular Habs Inside/Out blog (run by my employer, who will be cutting me a cheque shortly for the plug) has introduced some guest blogging, bringing in devoted Canadiens fans to blog on the site in a section called The Other Wing. What I find interesting about this is that two of the four people are also blogers: Eric Engels writes about the Habs for HockeyBuzz.com and David Kellerman is one of the Four Habs Fans (you know, the one with boobies all over the place). They may not have all the access that a mainstream media outlet does, but they make up for that in enthusiasm.

In other Habs links (also from HIO):

Gazette Habs beat writer Pat Hickey, who disappeared for a month to get his knee replaced, is back in time for the beginning of the regular season (this is how hardcore he is – he schedules major surgery around the Canadiens’ playing schedule). His first Standing Pat column back on the beat explains his recovery process and mentions the sympathy he now feels for athletes who have to keep themselves in shape.

Pat also participates in the first episode of the Habs Inside/Out PuckCast, which returns for a third season.

Meanwhile on another page, Stephanie Myles (who with Dave Stubbs has been covering the Canadiens in Hickey’s absence) has a feature on the RDS guys, Pierre Houde and Benoit Brunet, the latter replacing Yvon Pedneault as the play-by-play analyst. Near the end it goes into Pedneault’s dismissal:

But both Houde and Brunet said they were surprised Pedneault got the axe.

“I didn’t know it was in RDS’s plans,” Houde said. “That’s what’s happy and sad about our line of work, we’re all freelance workers who work together. And as Benoît has said, it’s like a hockey team. Your linemate is traded, or retires, or he becomes a free agent. You stay and work with someone new.”

“I wasn’t expecting it,” he said. “But the phone rang. I always said I’ll wait, and when they give me the sign I’ll be there. It happened this year. I was surprised.”

The article also goes in depth about technical and programming changes for the new season.

Myles Someone who may or may not be Myles, what with this byline strikyness, also writes a sidebar about anglo Canadiens fans watching French broadcasts (and vice versa).

Finally, today is the first appearance of The Gazette’s new roughly-monthly Hockey Inside/Out special section, which includes in-depth coverage of the advertising goldmine very popular Canadiens. Eight of them will be produced over the coming centennial season.

The special section includes an article from Mike Boone on how the Habs Inside/Out site was born (it was an idea of Editor-in-Chief Andrew Phillips), as well as the usual season-preview fare.

with his urgent Mats Sundin-related bulletins.

Some of us are working alone in the Sports department late at night, hoping beyond anything else that an announcement doesn’t come out of the blue to screw everything up.

You probably already know the story, so I’ll just provide you some colour commentary, courtesy of the Habs Inside/Out chat room immediately following the game:

and, uhh, Maxim Lapierre scores Montreal’s second goal. Poor Michael Ryder. First he loses his hat trick to Streit, now Newsday takes away another goal. Then again, it seems they left halfway through the second period.

You might think that my coming back to work there would be the biggest news at The Gazette this week, and it is, but there are a few other things happening too as the paper changes, shifts its focus from print to online, and manages with the impact of losing over a dozen staff to buyouts.

Among changes that directly affect readers:

An updated list of departing and status-changing columnists appears below. The latest edition is Gaetan Charlebois, whose final Chaud Show column was last weekend.

END_OF_DOCUMENT_TOKEN_TO_BE_REPLACED

The Gazette’s Habs Inside/Out blog (which is liveblogging the game going on right now) has undergone an overhaul, switching from Movable Type to Drupal. Among the sweet stuff coming in as a result are user registration, comment threading, comment rating, avatars, comment preview, and those annoying social bookmarking links on each post.

The design still needs some ironing out, so expect the look to change slightly (hopefully including getting rid of that awful sea-green). I also noted that “associate blogger” Kevin Mio has been promoted to having his picture on the homepage again.

The backend of the site, administered by techies John MacFarlane and Dru Oja Jay, is separate from the CanWest online canada.com nightmare, and that’s a good part of why it’s so successful.

Concordia Reports, the TV news show created by Concordia journalism students, has started its third season since the shows started being uploaded to YouTube.

Though it’s a low-budget show, its journalists are untrained and nobody involved is going to win any awards for smooth acting, the show provides a chance to watch some interesting stories about Concordia and Montreal.

The second episode of the season includes a story on CJLO, the Concordia student radio station that’s still, after a gabillion years, trying to get its transmitter setup to broadcast on AM. It also features a lengthy interview with Mike Boone (starting about the 12-minute mark) about HabsInsideOut.com.

So far they have 32 shows uploaded, between 15 and 25 minutes in length.