For those who missed it, Jack Todd’s first column as a freelancer came out this morning. You’ll recall he left his job as a full-time columnist in January with a sack full of buyout cash.

Now he’ll be writing a weekly column on Mondays, which will be on serious sports issues (compared to his more juvenile Monday Morning Quarterback).

His first such column praises Canadiens GM Bob Gainey over this week’s trade of Cristobal Huet and the non-trade for prize player Marian Hossa. 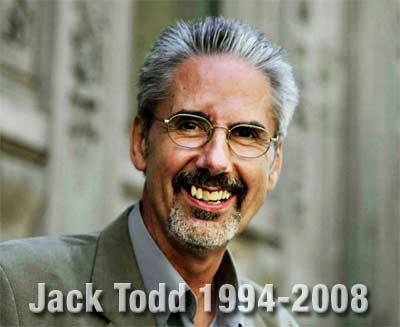 Friday was Jack Todd’s last day at The Gazette as an employee. You’ll recall he took a buyout earlier and is leaving his full-time job to pursue fiction writing. His last act writing this column looking back on his 14 years as a columnist. It talks about his love for the Expos (and his heartbreak at their downfall), his love for boxing, his time at the Olympics, a couple of throw-away references to the Habs (perhaps ironic that the greatest team in hockey didn’t win the Stanley Cup once during Todd’s time here), and his greatest hero Clara Hughes. It ends thusly:

Regrets? Of course I have them. By the dozen. Lost friendships, times when I was too harsh, times when I used bad judgment, times when I should have thought longer and harder about a column.

But I can say with complete honesty that I have always called ’em as I saw ’em: I never backed down out of fear, I never wrote a single line I didn’t believe at the time – and I never tried deliberately to create controversy, although heaven knows, it seemed to follow me around.

Now I’m out of here, although I will be back in a different guise at some point in the future. I will leave you with the words from Ezra Pound’s 81st canto: “What thou lovest well remains,/the rest is dross.”

And so it ends, not with a bang but with a whimper. No mention elsewhere in the paper that one of its most recognizable faces was leaving. No note from the publisher, no Aislin cartoon, no big goodbye ad from the marketing department. No notes of support from fellow columnists. Nothing.

Nothing except a single letter, printed in Friday’s paper, urging him to reconsider.

His colleagues at other media have similarly been silent, with the exception of La Presse’s Réjean Tremblay, who says despite their differences he really respects Todd.

I never met Jack Todd personally (sports writers don’t spend a lot of time at the office), though I’ve talked plenty with his son who’s a stand-up (and stand-up-tall) guy. I’ve never much been a fan of the grammatically-challenged MMQB columns. And his occasional comments about U.S. politics (even though I agree with him for the most part there) could have used a bit more thought and a bit less emotion.

But while a lot of people don’t like him (even if they’ve never met him), everyone knows who he is. Nobody ignores him. I, for one, would rather the former fate than the latter.

Besides, Todd is an excellent writer when he wants to be. I’m hopeful the weekly Monday sports column he’ll be writing as a freelancer will bring the better writer out of him.

Perhaps that’s partly why there isn’t much ceremony. He’s not really leaving, he’s just cutting down his hours.

Still, this post is much cooler if we pretend he’s gone forever, so let’s do that.

I will leave you with a link to a story that is iconic of Todd’s career and of those who oppose him: A Patrick Lagacé column (back when he was still at the Journal) printed side-by-side in English and French, explaining how Todd mistranslated one of his earlier columns in a column Todd wrote in The Gazette.

Mistranslating a text in your second language is one thing. Having Patrick Lagacé fill an entire page in a competing publication printing two copies of an article in which he criticizes you for mistranslating a single sentence? That takes talent.

You might remember when The Gazette announced it was cutting staff through attrition — offering buyouts to seasoned full-time editorial staff to reduce it by about 20 people. The good news is that the generous offer worked, and enough people took advantage of it that there won’t be any layoffs.

The bad news is that the paper is losing a lot of seasoned staff, including some well-known columnists.

Jack Todd is the most visible of those names. He writes his goodbye column in the New Year’s Eve edition of his rapid-fire-judgment and grammatically-challenged Monday Morning Quarterback column. He’ll be leaving on Jan. 11 to “concentrate on writing fiction.” Though he won’t be a full-time staffer anymore, he’s expected to stick around doing freelance, and will start a “very different and more serious Monday sports column.”

Other columnists departing the paper within the next few weeks include:

The paper is also losing copy editors, writers, support staff and section managers. It’s unclear how many of them will continue writing freelance and how many will cut ties completely. But at least they all left of their own accord. 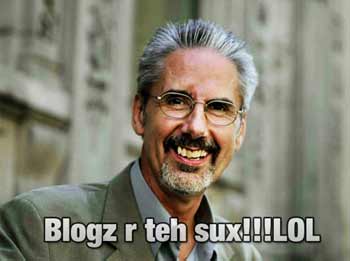 I suppose it’s somewhat ironic that the Monday Morning Quarterback column, which prides itself on using as many consecutive ampersands, question marks and exclamation points as possible (33 exclamation points in a row this week) makes fun of the grammar of some teen blogs. (The fact that Todd’s entire exposure to blogs seems to be reading the grammatically-challenged rantings of immature teens might also be cause for concern.)

I think Mr. Todd just isn’t reading the right blogs. May I suggest this one? I use l33t only in jest.

UPDATE: Totally missed this post from Mike Boone defending bloggers’ honour. The comments attached to it are typical anti-Todd trolling.