“Rogers Media Unveils New Magazine Content Strategy” reads the press release, in typical vague fashion. The upshot is that Rogers is making severe cuts to its magazine portfolio, moving some online-only, reducing publication frequencies of others (including Maclean’s), and selling off the rest.

Except Hello! Canada, the celeb gossip mag. Nothing’s changing there.

Going out of print (but keeping websites “with new content posted daily”):

The changes take effect in January. The notice to subscribers says the French magazines will “cease publication” in December, which means if a buyer isn’t found by then, they’re going to shut down.

The fact that Rogers is openly putting these magazines up for sale suggests that obvious potential buyers are not interested (i.e. TVA Publications). But maybe there’s some deep-pocketed person who would be willing to give L’actualité a second chance.

This news comes the same week Rogers announced the shutdown of shomi, its subscription video-on-demand service. You have to wonder what’s next, and in particular what this might mean for Texture, its bulk magazine subscription app. (Rogers tells the Financial Post that Texture makes a profit.)

No word on how many jobs will be lost as a result of these changes. How many magazines are sold versus shut down will have a big impact on that number.

And colour me pessimistic on the future of magazines that have been turned into digital-only publications. Just about every print publication that has gone online-only in the past has eventually been shut down all together. 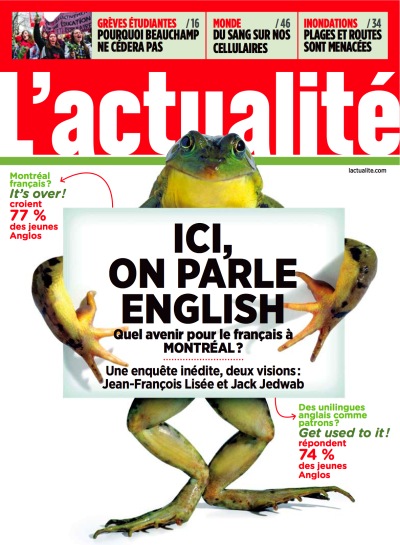 Kind of hard to imagine words that could infuriate language activists more. I won’t call it sensationalist, but when a magazine puts a picture of a frog on its front cover and tells a people sensitive about their language that their battle is essentially lost, I can’t really find a better word.

Last Thursday, L’actualité released results of a survey they did (with CHMP 98.5FM) of Quebec anglophones in which they asked them questions about language issues in Quebec. (The full results – with actual questions – are here in this PDF file)

The questions and answers were rather interesting, and I’ll summarize them here. Of Quebec’s anglophones:

The results appear in last Friday’s issue of L’actualité (or is it l’Actualité? Or L’Actualité? Even francophones have issue with capitalization of proper names), along with two stories analyzing them. One is by Jean-François Lisée, a former PQ adviser who hammers the panic button. The other is by Jack Jedwab of the Association for Canadian Studies (or, more accurately, it’s a reporter’s Q&A with Jedwab), who highlights how things have improved. There were also some sidebars, including an interview with Sherwin Tjia, the unilingual anglophone whose appearance on Daybreak a few weeks back ignited a whole controversy because he dared say he’s okay being unilingual.

The magazine also asked Gazette columnist Josh Freed to blog for them, giving an anglo’s perspective (with his usual dose of humour).

Reaction to the poll and accompanying pieces seems to have fallen in one of three categories:

And there is a lot of contradiction. Apparently about half of anglo Quebecers have never had a significant conversation in French. But 80% of them are bilingual. This begs the question: How do this 30% know they’re bilingual if they’ve never spoken French?

One of the more surprising results is that for most of these questions, it’s the younger anglophones who seem to take the more anti-French stance. More young anglos think it’s okay to live life as a unilingual anglophone, despite the stereotype one imagines of the old West Island angryphone who grew up in the 50s being the most anti-French.

I wonder how much of that is more due to inexperience than a generational difference. I suspect many of these views might change as these people get older, become more familiar with francophone Quebec and try to make careers for themselves in this province.

I could go after the methodology. It was an online poll, which has issues in terms of accuracy. Some of the questions seemed a bit pushy. And some were based on false premises (the proportion of people on the island of Montreal whose first language is English is diminishing, not increasing, and there’s no risk of anglophones outnumbering francophones in Montreal or Quebec any time soon).

But one thing we can all seem to agree on is that more research is needed. These are complex issues and I suspect the answers given have complex reasoning behind them.

Of course, people who are paid to drum up controversy to fill column inches won’t be satisfied with waiting for more research.

It shouldn’t be particularly surprising that anglophone Quebecers don’t get much news from Quebec City, don’t watch much of Radio-Canada and TVA, and don’t listen to French-language radio.

Just like it’s not a surprise that francophones have little to no interest in English Canadian culture (what little of it there is). On a recent episode of Tout le monde en parle, Guy A. Lepage interviewed Jian Ghomeshi, and at the end he cited Jack Layton, saying once that English Canada doesn’t know Lepage and French Canada doesn’t know Ghomeshi.

This is a problem, and one I think we need the help of both sides to solve. (When was the last time Julie Snyder, Véronique Cloutier or Régis Labeaume reached out to the anglophone community in any significant way?)

Fortunately, simple demographics might be helping change this. Anglophones in Montreal are mostly bilingual, and many of them are in relationships with francophones. To some this might be assimilation (particularly since most of these couples choose English as their common language), but I like to hope that this assimilation goes both ways.

And there are people trying to do their part using new media. One blogger offering English summaries of Tout le monde en parle to try to get anglos to care about this important show.

With a bit of patience, a bit of tolerance, and a bit of effort from both sides, maybe we can get recognition of Véro and Guy A. among anglophones and Rick Mercer and Mutsumi Takahashi among francophones to the point where it’s clear that there is no more divide.

Then, we can hope, the next survey of anglophones by L’actualité won’t be whether they know who Julie Snyder is, but whether they preferred Mélissa, Andréanne or Andrée-Anne.

UPDATE (April 10): Jack Jedwab responds to L’actualité’s survey with one of his own. It shows: 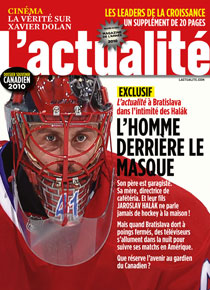 L’actualité recently had a profile of Canadiens goaltender Jaroslav Halak teased big from its cover.

And in the piece itself:

There’s also a photo gallery of Halak’s hometown of Bratislava, Slovakia, and a blog post about Halak’s trade to St. Louis.

I guess determining that the whole Fredy Villanueva thing and police not getting along well with young brown people has all been settled now, L’Actualité has ended its Montreal North blog. (Well, actually it’s made it “dormant”, which is kind of like when my ex-girlfriend said our relationship was just on a break – it’ll be forgotten about quickly.)