Back in March, after the NDG Monitor shut down its print operation after 83 years and decided to go online-only to save costs, the borough of Côte-des-Neiges-NDG relaunched its borough newsletter Le Citoyen to make it more newspaper-like. The Monitor’s Toula Foscolos took this as a direct attack on freedom of the press and blasted the paper in a (now-online) column.

Two weeks ago, she did it again, criticizing the paper for being a mouthpiece of the government (which it is).

Both sides are being a bit childish here. A government official complaining that a newspaper is too critical is kind of absurd on its face, no matter what they may think the journalist’s motives are. But Foscolos’s response, which talks about how the paper’s number changed and that’s why she didn’t get his messages, sounds like the kind of stuff I used to hear from student politicians who thought it better to have an hour-long public screaming match about miscommunication than a two-minute phone call that would have resolved the issue.

What annoys me is that with all the bitter exchanges back and forth (Foscolos is helped out by supportive letters she publishes from her readers) is that the Monitor and Le Citoyen are basically the same. Both of them republish press releases without commentary, write fluff stories about community events and do little original journalism – Le Citoyen because that’s not its function, and the Monitor because it doesn’t have the budget to report. Instead of spending what little precious time she has doing original reporting, Foscolos leafs through the borough newsletter and complaining that it’s not a newspaper.

This city already has enough self-important blowhards who nitpick the media instead of doing original reporting. It doesn’t need more.

In case you missed it, last month the borough of Côte-des-Neiges-Notre-dame-de-Grâce-de-our-borough-name-is-too-long relaunched its quarterly newsletter, renaming it “Le Citoyen” and giving it a newspaperish look. It also moved to a five-issues-a-year schedule instead of four.

This caused some concern from those who saw this as the borough attempting to replace the NDG Monitor, which recently decided to stop its print edition, with a government propaganda machine which would never be critical of the borough.

The Gazette’s Henri Aubin takes a critical look at the first issue of Le Citoyen, which is available as a PDF in English and French on the borough’s website. The Suburban’s Dan Delmar also looks at Le Citoyen, with quotes from journalist-turned-borough-PR-director Michel Therrien.

A direct comparison is somewhat silly here. One is a quarterly newsletter, and the other was a small, understaffed weekly newspaper that had maybe one article a week that provided anything resembling interesting local news.

Still, there’s a larger question here: If the private news media is unwilling or unable to provide loal news, will it be up to the towns themselves – and their seemingly limitless communications budgets – to provide it for us? Could future newspaper shutdowns be followed by newsletter startups that try to fill the gap in information about local events and (uncontroversial) informtion?

It’s not the borough’s fault that The Monitor shut down, so there’s no sense in blaming them for it, or calling it unethical, as The Monitor’s Toula Foscolos does.

What should be outraging people (like former councillor Jeremy Searle and Aubin) is that the borough is spending $73,000 a year (and probably more in editorial, design and other costs) to distribute a newsletter to 80,000 people who won’t read it because it’s filled with self-congratulatory messages that don’t say anything even remotely useful. 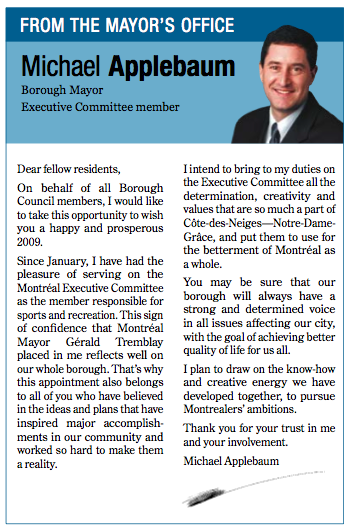 Now, other than the fact that Applebaum is now on Montreal’s executive committee, responsible for sports and recreation, did you learn anything from the text above?

This isn’t a problem limited to CDN/NDG. All the boroughs have these kinds of newsletters, and they’re all filled with messages from elected officials talking about how honoured they are at something or other. Some include messages from each of the councillors as well, wasting untold amounts of space and money.

Not only do our highest elected officials have to spend time writing (or, in Mayor Gérald Tremblay’s case, hire writers to compose) absolutely pointless messages, but they then must be edited, translated and laid out in these newsletters, which are then printed and sent out.

There’s a usefulness to borough newsletters. The last one in my borough gave details about changes to garbage and recycling collection schedules. But nobody in my apartment building read it because these things get tossed away as soon as they arrive (just like the local Transcontinental weekly and the Publi-Sac).

Perhaps, during this time where everyone is cutting back their budgets, it might be a good idea to spend less time on these self-congratulatory messages and only distribute printed newsletters that contain information that’s actually useful to citizens.

And maybe the city can spend its communications budget making its website easier to navigate instead of patting itself on the back in print (or putting up ads everywhere asking people not to move to the suburbs).