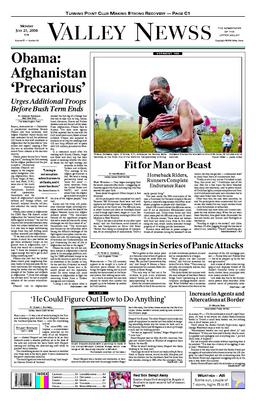 Regret the Error's typo of the year

Montreal writer Craig Silverman, editor of news corrections website Regret the Error (and author of the book by the same name) has released his review of the best media errors and corrections from 2008.

The Gazette has taken the leap, putting its heart and reputation on the line in the name of accuracy, and setup a corrections page on its website. It becomes only the second Canwest daily after the National Post to do so. It’s also the first Montreal daily to have a visible, dedicated page for people to find corrections.

Craig Silverman, who has been pushing for such pages on newspaper websites for quite a while on his Regret the Error blog, celebrates by using one of The Gazette’s corrections against it.

For those who missed it, Regret the Error‘s Craig Silverman was on CNN’s Reliable Sources this weekend, shamelessly plugging his book discussing some of 2007’s most hilarious corrections:

UPDATE (Jan. 6): The Gazette’s Bill Brownstein also writes about Silverman, crediting him as having been interviewed by CNN for his newspaper-corrections expertise.

Regret the Error presents a roundup of this year’s funny corrections and cases of plagiarism and fabrication.

No Montreal media appear on either list, though the Toronto Star gets two dishonorable mentions, for prematurely killing off Morley Safer and for bringing the Detroit murder rate up by a factor of 50. The Ottawa Citizen, meanwhile, put a photo of an innocent man on a section front, identifying him as a pedophile.

The Toronto Star’s public editor talks to Regret the Error‘s Craig Silverman about his new book (via J-Source).

The article talks about the reluctance of journalists to admit their own mistakes. It’s something you find in all professions, but journalists have a special duty to get their facts right. In fact, it’s the only thing they have to do.

Naturally, the article talks about how great the Star is at their corrections (few Canadian publications have corrections pages) and how they want to get better.

One suggestion, that Silverman has I think given up making because few bother with it, is to actually correct articles online when you issue corrections about them.

As a random example, this article about Ontario’s civil courts makes a simple error, saying that someone is currently in a position when she’s not. The correction is online and everything, but the original error is still there (about halfway down the article), and no mention is made of a correction.

For a more serious example, this correction notes that the Star violated a publication ban by revealing the names of victims in an inquiry. Unfortunately, at least one of the original articles, which has the full names of six children in it, is still online. (I won’t link to it because I don’t want to violate the publication ban myself, but it’s Googlable.)

In case the nature of the problem isn’t blatantly obvious by now, the original articles are emailed, del.icio.used, Dugg and otherwise passed around, and people can read them days after the fact, learning the false information with no clue that a correction has already been issued.

Newspapers, radio stations and TV networks can’t go back in time and unpublish something, but website articles can and must be altered to correct inaccuracies, preferably with a note describing the nature of the error and how it was corrected.

Why is that so hard to understand?

Regret the Error’s Craig Silverman goes on an extended rant about the quality of mainstream media (mostly newspapers) now that their newsrooms have been slashed and journalists are overworked.

It’s a must-read for anyone in the newspaper business who thinks that firing editors and forcing extra work onto untrained journalists is the way to survive in this Internet world. People care about quality, they’re annoyed by typos and factual errors, and eventually there will be a tipping point (some argue we’re already well past it) where people will realize that newspapers aren’t worth their rising subscription fees.

Craig Silverman’s Regret the Error is back, with a redesign (read: left menu is now on the right) and info related to the book (including, naturally, its corrections).

How big is Craig Silverman? He’s so big, his articles in the Globe and Mail are getting corrections featured on Regret the Error.