It’s amazing how much of journalism these days consists of someone searching for something on Twitter and then being shocked at finding that thing that’s being searched for.

On Thursday, a few people had the bright idea to search for people who posted on Twitter that the United States turned 2,013 years old on July 4. Of course that’s ridiculous and a sign that the U.S. education system has failed miserably.

Or maybe they were all kidding. Don’t bother checking that, just publish and shame! It doesn’t matter how young they are, they must be ridiculed, post haste!

But let’s go through them one by one, shall we?

END_OF_DOCUMENT_TOKEN_TO_BE_REPLACED

This is one of the reasons I dislike Twitter. It makes perfectly reasonable people look like grammatically-challenged teenagers that make no sense. 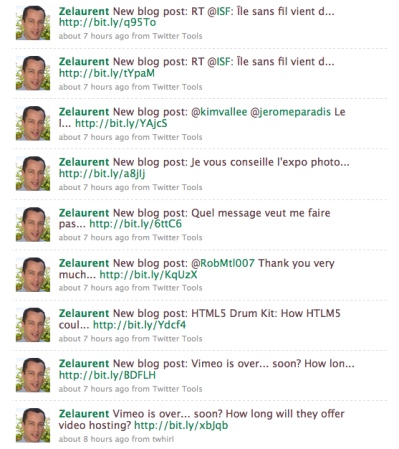 The problem with programs that do things automatically is exactly that.

CBC Daybreak has taken to Twitter, with staff (including host Mike Finnerty) sharing the tweeting duties. Although it includes a lot of stuff that might be considered noise to some (live-tweeting of Habs games, for example), it also gives a rundown of the next morning’s broadcast the evening before, which is useful.

The only thing is you have to learn how to speak txt:

I think I’ll just stick to listening to the podcast and finding out what was on the program hours or even days after it aired.

Congratulations to Montreal-based identi.ca which announced this morning it has acquired Twitter!

I just hope that doesn’t mean I need to figure out Open ID before I can tweet something.

Some people see Twitter as a form of instant messaging. But those people can quickly forget that what you say on Twitter is just as public (if not moreso) than what you post on Facebook.

National Post technology reporter David George-Cosh learned that the hard way today when an expletive-filled argument he had with a source on Twitter was publicized (and republicized and republicized), making him (and the paper) look pretty bad.

The result, mere hours later, was an apology posted to the Post’s Editors blog (which doesn’t name the reporter it’s apologizing for, nor the person it’s apologizing to, nor the nature of the conduct, but who needs specifics for these things?). (Via Regret the Error)

Reporters are human, and like everyone else they’ll have off days and they’ll get into arguments. But when they happen online, those arguments can easily become public, and this is probably not the last time we’ll see apologies for personal conduct of people associated with media.

In this case, the reporter’s actions were in a professional capacity (which makes it the paper’s problem), but I wonder when the time will come where reporters, columnists and other public figures associated with a publication’s brand will have clauses in their contracts about what they can post to their Facebook profiles, personal blogs or other public and semi-public forums online.

UPDATE: April Dunford, the victim of the tirade, has similar thoughts on her blog.

UPDATE (Feb. 12): More reaction from Roberto Rocha and a let’s-attack-the-victim post from ZDNet’s Jennifer Leggio (which gets its basic premise wrong). Additional commentary from Mathew Ingram and the Telegraph’s Shane Richmond.

UPDATE (May 25): Three months later, George-Cosh writes about the “incident” on his blog, saying he’s learned some hard lessons, though he still makes excuses for his behaviour.

I’ve never been a fan of Twitter. Looking at people’s status updates (or “tweets”, as its members have been told to refer to them), all I saw were a bunch of @ signs and TinyURL addresses. There seemed to be very little that was actually there.

But new media experts around the globe were embracing it. Some people who had been star bloggers a few years ago had all but abandoned them in favour of this new service. They heralded it as some holy grail of journalism (a suggestion I’ve already attacked head-on), as the best way to get breaking news and as being better than blogs.

So a few weeks ago, I setup a Twitter account. I did what I was supposed to do, follow some friends and start posting updates. Few of them would be considered really interesting. Anything important went on the blog, where I have more readership.

Before long I started getting messages that people were following me. A lot of people I don’t know. They probably found me through mutual Twitter friends, since I hadn’t posted my Twitter account here until now (mind you, it wouldn’t take a rocket scientist to figure it out). Unlike blog readership, which I’m sure includes hundreds of people I’ve never met, Twitter seems more personal. I get a message whenever one clicks on the “follow” button, and I see an image of that person’s face with a list of their updates.

I installed one of those Twitter programs (I settled on TwitterFox, which I’m not entirely crazy about but will do for now) to facilitate the Twittering, and I setup my cellphone so I could send Twitter updates by text message (unfortunately the reverse isn’t true, so I can’t read other people’s Twitter messages through my cellphone).

Anyway, you’re here to read about why I don’t like it, despite having used it for a month. I’ll give it to you in point form:

Despite all this, I’m not dismissing the concept of microblogging. Laconi.ca solves many of the technical problems (which suggests that Twitter can solve them too), and others can be fixed over time with culture change.

Despite its failings, people still use Twitter and (like Facebook) it’s a source that journalists have to mine for information. It involves filtering out a lot of noise, but there are nuggets of gold inside. So whether I like it or not I’ll still have to keep using it. Unlike David Akin, who is de-twittering, I still think there’s information that can be delivered using this medium.

But I won’t be using it any time soon to disseminate any important information. Follow me if you want, but you’re not going to see much quality. Anything I have to say, even briefly, of any substance will just be said here. There’s no minimum length for my blog posts.

Mere hours after a U.S. Airways jet crash-landed in the Hudson River next to New York City, stories about the influence of Twitter were being ejaculated left and right. They were all fawning over how news of the crash hit Twitter minutes before the big media outlets, and one person even posted a picture of the downed plane which got heavily circulated. This was described as a “scoop” for “citizen journalism”.

Don’t get me wrong, Twitter is a powerful tool, despite its really stupid self-imposed limitations. They will break these kinds of stories first and traditional news outlets should mine it for information (which they can then use for free!). But all it was were some eye-witness reports, in a city that has no lack for actual journalists. All we learned from Twitter was that a plane had landed on the Hudson River and that people were standing on its wing.

(Mind you, listening to CNN’s mindless filler yesterday afternoon, it was clear they didn’t know much more than that either).

But the rest of the story didn’t break on on Twitter. It broke through CNN or the New York Times or other outlets that could assign a journalist to chase the story.

Phil Carpenter, a Gazette photographer who recently started his own blog, points out that journalists who just repeat something they’ve heard (say, by rewriting a press release) don’t earn bylines because what they’re doing isn’t really journalism.

Perhaps we should consider that when we compare an eyewitness account to the work of a professional journalist.

UPDATE: J.F. Codère and I are happy to have found someone else who feels the same way.

In my suggestions for 2009 in Hour, I included a request for emergency services and public transit to have live information online, which would democratize police-blotter reporting and free reporters to write about more important stories:

[…That] Montreal police and other emergency services post their breaking news about car accidents, fires and murders online so that curious Montrealers can check for themselves what’s going on instead of having to wait for one of the media outlets to take dictation from the PR guy

Just recently I’ve learned that the Toronto Fire Department is doing exactly that, and this guy has already turned that into a Twitter feed.

When is Montreal going to follow in its footsteps?

I’m informed by email that electopinion.ca, the five-party Twitter snapshot site, has tweaked its automated search terms so it stops showing stuff unrelated to the Liberal, Conservative, NDP, Bloc and Green parties.

Still no RSS feeds, though. Not to mention my general distaste for things Twitter.

In case you don’t feel your life is boring enough this summer, Andy Nulman is twittering as he prepares for the Just for Laughs galas, with matter-of-fact posts like “just got off the phone with Kathy Griffin”