I think what worries me most about the weather, as I saw it on tonight’s Téléjournal, isn’t that major cities on the west side of the country are farther east than they should be, but that the wind there is so strong it is repeatedly pushing Calgary into Edmonton. 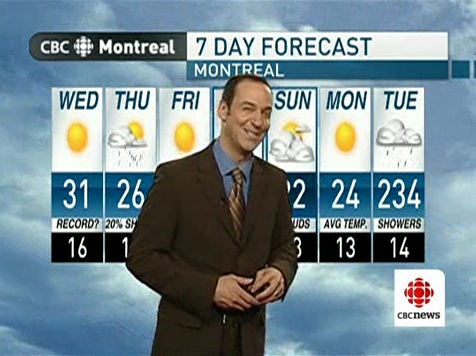 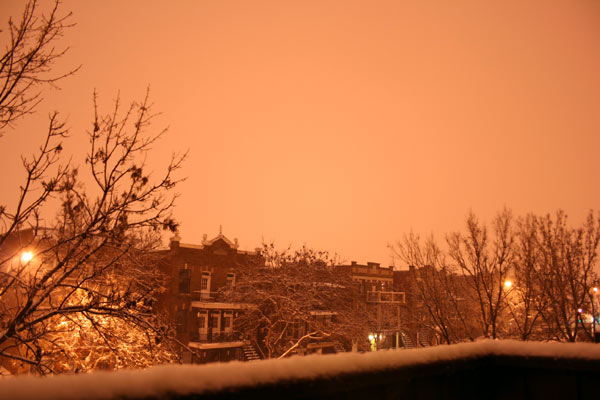 I dislike snow. Or at least I always complain about it. Snow means it’s cold and winter has officially arrived. On the other hand, I enjoy playing with snow, even when everything I wear is soggy afterwards.

The other thing I like about snow is the night sky after a snowfall. The city’s lights bounce off the bright, white sheet that has covered everything, then bounce off the low, white cloud, and scatter off the millions of little snowflakes falling to the ground. The result is an orange, almost purple sky that creates a strange middle ground between night and day.

Usually by the next night, the snow has finished falling, the streets have been plowed or the thin sheet has melted, and the clouds have dispersed. And night becomes dark once again.

I admit, I get a perverse pleasure out of people who are the creators of their own misfortune. Tragedies in the classical sense. Not necessarily causing death, but at least causing inconvenience. Hurricane Gustav created two examples of this, and the victims are our favourite punching bags: politicians and the media.

The first comes out of the video above. A few weeks ago, Stuart Shepard of Focus on the Family posted a video online in which he half-jokingly suggests that Christian Conservatives pray for rain during Barack Obama’s acceptance speech at an open-air stadium. They say they never meant for it to be taken seriously, but it was, and the video was pulled (the one above is a copy).

Of course, there was no rain the night of Obama’s acceptance speech, and the Democratic convention went off without a hitch. But the day after, as John McCain was announcing his vice-presidential pick, we start hearing about this hurricane headed for the Gulf Coast. Toward New Orleans. Three years almost to the day that Katrina struck.

Oh the irony. It almost makes me believe in a god, as it did Michael Moore.

The second example comes from our good friends at CNN. When Barack Obama announced his VP pick, CNN filled the airwaves with news and analysis. Responding to a viewer comment via Facebook (oh how the media has changed, folks), anchor Rick Sanchez says this on air:

By the way, I have to share this with you. It is from Sam. He says, Rick — this is on Facebook — I’m counting on you to do the same kind of coverage when McCain announces his vice president as you’re doing tonight when Barack Obama has announced his vice president. Sam, we’ve already made that decision. I can guarantee you we will.

No caveats, no ifs or buts, just a bold guarantee. Of course, neither CNN nor the other news networks are coming close to meeting that guarantee for the convention. Half the news about Sarah Palin was surrounded (literally) by hurricane updates, and the convention coverage is being threatened by it. Even the convention itself is changing plans at the last minute to deal with people (like President George W. Bush, Vice-President Dick Cheney and Louisiana Governor Bobby Jindal) who can’t speak.

I actually feel a bit bad for the Republicans. It’s not their fault this hurricane hit with such horrible timing, nor is it their fault that Bristol Palin got pregnant. If they lose in November, it should be because of the issues, not because the campaign was derailed by … well, acts of God.

A tornado!* Run for your lives!

*Not actually a tornado

For those of you who missed it, through the magic of YouTube we have plenty of shaky, noisy home video clips of today’s kinda-freak storm (Cyberpresse also has a photo gallery; The Gazette has galleries of professional and amateur photos):

Close call for window washers at Place Montreal Trust (LCN has some details about this story, The Gazette too — dramatic part’s at the end):

END_OF_DOCUMENT_TOKEN_TO_BE_REPLACED

All open (or at least none say they’re closed)

The floodgates opened this morning on ice storm anniversary stories. Every major local media outlet has something, and many have a lot.

Part of that is because there isn’t much news on the 5th of January. Part is because they’ve had 10 years (with constant electricity) to prepare. And part is because it had such a profound impact on everyone’s lives for two weeks to a month.

This is perhaps the first big project among local media relying on reader-generated content. It’s easy to see why: Everyone remembers the ice storm. The supply of stories is practically infinite.

The problem is that everyone’s story sounds about the same. We were without power. The roads were hard to drive. We had to leave our home and move in with a family member who had power. We communicated with our neighbours for the first time ever. We helped people in need. We were happy to see electricians from the U.S. who came to help. There was a lot of snow and ice.

That’s the problem with user-generated content. It can produce some stunning gems, but most of it is boring filler not worth our time to read.

The archives are fun to look at (particularly the audio/video from the CBC and the PDF pages from The Gazette), to see how different the media and the world was just 10 years ago (67 cents/litre for gas was considered gouging).

Here’s what I’ve found so far (some links via mtlweblog), recommended reading highlighted in bold:

END_OF_DOCUMENT_TOKEN_TO_BE_REPLACED

The Agence métropolitaine de transport has still not recovered from this weekend’s snowstorm, and trains on the Dorion/Rigaud line are still not opreating operating properly, forcing delays during every rush hour since, for a variety of reasons (but basically “snow” and “cold”).

Spokesperson Mélanie Nadeau says she hasn’t seen anything this bad in six years.

Which is the same thing she said Sunday, which was “the worst day since I started.”

And apparently it’s worse than breakdowns in May, when she said nobody could remember anything as bad in 10 years.

How many more worst days is the AMT going to experience?

UPDATE: My mother points out that I misspelled “operating” above. I live with the unending shame.

Since people have been Googling about school closures tomorrow (Monday, December 17), here’s a quick list of decisions that have been made as of 11pm Sunday. (Assume “open” means “tentatively open” and check the website before leaving in case they change their minds.)

(That I could think of, have your butler check the website (or CJAD’s list) if not listed here)

I was going to do some Christmas shopping today, but because (a) shopping malls amazingly are still closing at 5pm on weekends two weeks before Christmas and (b) I took one look outside, I decided to stay home and be one less strain on the transportation network.

That kept me in perfect position to see the lightning that everyone’s talking about, along with its acoustically suppressed thunder.

UPDATE (Dec. 18): The Journal wonders if the schools jumped the gun and if the closings were really justified.

Coolopolis reminds us of an anniversary anyone over 30 remembers vividly: July 14, 1987. On one hand, Tim Raines of the Montreal Expos was named the MVP of the Major-League Baseball All-Star game. On the other hand, overnight rainfall was measured not in millimetres but in feet, and the Decarie Expressway became so flooded cars had to be abandoned in place.

CTV’s Rob Lurie has a lookback at the Flood of ’87 with some memorable (and to us young’uns, unbelievable) pictures like this one: 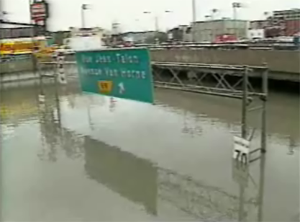 For more reminiscing, check out Radio-Canada’s archives. (Wow, did people really dress like that?)