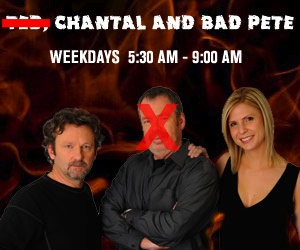 Ted Bird, one of the veterans of Montreal radio, has flown the coop.

The official word from CHOM, Pete Marier and the Bird Man himself is that Bird resigned from his morning show job.

I’d originally reported here that he had been fired. I’ll swallow my pride and retract that. My sources were wrong, and I relied too much on unverified information in repeating them. My apologies to my readers and to CHOM.

Bird himself confirmed Wednesday that he resigned from the station “for personal and professional reasons”:

Just for the record, I did in fact submit my resignation from CHOM for personal and professional reasons, which VP and general manager Martin Spalding graciously accepted.  I no longer have an e-mail account at the radio station but if I owe anyone money or they want their driveway shovelled, they can reach me on my home e-mail at tesburp@live.ca.

It would be fair to say that there were creative and philosophical differences that took a lot of the passion and joy out of the process, and I’m not going to get up at 3am to go to a job that’s no fun anymore. CHOM is skewing younger and I’m getting older (51 this month) so it just didn’t feel like it fit.

Bird welcomes comments at his email address above, which he has asked me to share with his listeners.

The story is getting coverage in The Gazette and at CTV. Both are being flooded with comments from people who support Bird and others who support him being taken off the air.

Bird gave an interesting quote to The Gazette about the state of the industry, something I’ve heard a lot from other radio veterans:

Radio stations used to be owned by families. They were creative people with a passion and instinct for the business. Now stations are run by corporations. They’ve taken the craft out of the hands of the craftsmen. I have to work with creative people – as a collaborator – not be dictated to.

Following the usual playbook of pretending like people never existed when they leave, Astral wasted no time scrubbing references to Bird from CHOM’s website on Tuesday, even while ads showing Bird were still appearing. Bird’s blog and CHOM email have been deleted or disabled.

The move (or at least the announcement of the move) comes the day after Chantal Desjardins joined the morning crew. Desjardins moved over from CJFM (Virgin Radio 96) to replace Kim Rossi, who left for a new job in St. Catharines, Ont. Desjardins and Bird didn’t work a single show together as “Ted, Chantal and Bad Pete”.

The CHOM morning show was also in the process of finding a new name, running a contest asking for suggestions from listeners. That contest has suspended entries, though they will draw the grand prize on Friday for anyone who entered before the contest was rendered moot. For now, the show is being referred to as “Chantal and Bad Pete“.

On Wednesday morning’s show, Marier started by stressing that Bird resigned suddenly on Jan. 1 (though few people knew about it until Tuesday). He said he doesn’t know why Bird quit, but that it was for “personal reasons”. (He also took a shot at those pesky online rumours that are full of “BS”.)

Marier also said the station will be looking for a replacement for Bird, even suggesting that one would be in place by February.

That’s not to say Marier was quick to move on. He devoted a perfectly respectable 17 minutes of the first three and a half hours of the show (it was extended an hour because of the unrelated fact that afternoon host Rob Kemp has just had a baby). Considering this is a music station that’s lucky to get five minutes an hour to talk about stuff between music, commercials, news, traffic, sports and weather, that’s not bad.

Marier repeatedly stressed that Bird had not been fired (I feel guilty enough to want to send him flowers), and that there was no personal conflict between the two, who have long been friends (apparently some people suggested that Marier had something to do with Bird’s departure, which really makes no sense).

Bird first joined CHOM 21 years ago as a news announcer, moving from CJFM. In 1993 he and Terry DiMonte moved to CJFM to take over the Mix 96 morning show. DiMonte and Bird later reunited at CJAD and in 2002 retook the CHOM morning show in a bid to bring the station back to its roots (and ratings).

You can get a taste of Bird’s history in this mini documentary about the morning show trio, back when it was Ted, Kim and Kemp:

Asked what he’ll do next, Bird was his usual wisecracking self:

I have no immediate plans, although my 8 and 10 year old sons, Charlie and Sam, want the three of us to set up an Internet radio station, where Sam suggests that some of our regular features include him falling down in the snow and hitting Charlie in the nuts with an apple.

Bird’s current and former colleagues said they were shocked by the news, which was given to employees in the late afternoon on Tuesday. Terry DiMonte, who teamed up with Bird for many years at three radio stations, called it a “sad day for Montreal radio.”