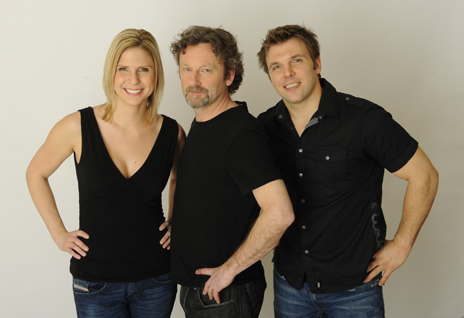 There are a lot of people on the Internet who don’t like PJ Stock. The former NHL player (who had twice as many penalty minutes as games played) has jumped into media in his retirement, as an analyst with Hockey Night in Canada and until recently a show host at the Team 990. He has been criticized for everything from being clueless about hockey to having a tenuous grasp of the rules of English grammar (not that I agree with these criticisms).

On Wednesday, two days after his contract expired at the Team 990, Stock officially joined the morning team at CHOM-FM, effectively replacing the departing Ted Bird.

It’s odd that PJ is considered a full member of the team because he’s only present half the time. The deal is he comes in from 7 to 9 Mondays to Thursdays (Desjardins and Marier do the full show from 5:30 to 9 Mondays to Fridays). And even when he’s present, it’s mostly Marier doing the talking. Desjardins reads the news and Stock reads sports (Abe Hefter is still reading sports news while Stock isn’t present).

Aside from the peanut-gallery comments that are common throughout the show, Stock’s actual talk time is about 10 minutes a day. This includes “Stock Options” (the latest bad pun on his name), a sports commentary segment at 7:20am. (Day 1, Stock criticized the Canadiens for being overhyped – hardly a unique idea. On Day 2, he criticized the media for not being more hostile to Tiger Woods’s wife for allegedly attacking him with a golf club – something even Marier wasn’t comfortable endorsing.)

Rather than try to summarize it all, I’ll let you listen to compilations of his sports reports and banter from his first two days:

Day 2 includes his first major blooper, when he couldn’t figure out how to turn on his microphone.

Hell, even if you’re a die-hard Canadiens fan, you might not like Stock. He calls it “Pete Marier’s favourite team” and doesn’t seem to share his city’s blind support for the bleu-blanc-rouge.

Otherwise, Stock is comfortable on the radio. He’s not awkward, he doesn’t slur his speech or say “umm” a lot. He’s not a radio professional by any means but he fits in well.

I don’t know how long this weird schedule can last though. It’s understandable that Stock wouldn’t want to get up at 4am the morning after a Habs game, and that travel to and from Toronto might make him unavailable on Fridays, but this just highlights the fact that to Stock, Hockey Night in Canada comes first and his job at CHOM comes second.

I have a feeling that, eventually, he’s going to have to choose between the two.