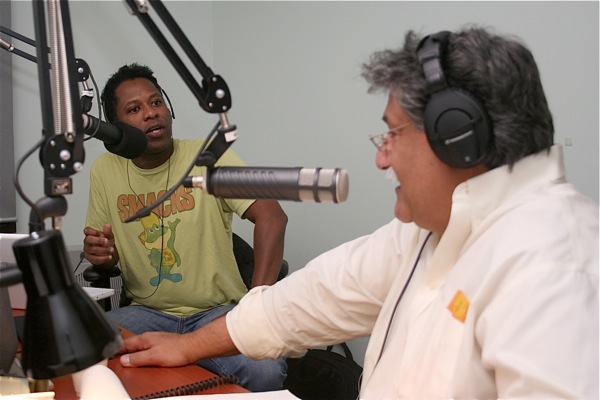 Patrick Charles, who started a new afternoon drive show with Paul (Tasso) Zakaib on low-rated ethnic station CKDG-FM last October, has decided to leave the station, and not come back from a three-week vacation.

“I really quit for personal reasons: the hours made it difficult, and things weren’t progressing the way I’d have liked them to,” Charles tells me. “Outside of that, we had a lot of fun. You can still tune into Tasso.”

Zakaib is remaining with the show and the station. He’ll be doing the show solo, which will mean having to play all the parts in his comedic sketches.

“I became a master at recording characters, playing it back and answering live, i.e., my mom and dad, my trainer, Jacques Ampere. It works quite well and there’s tons of stuff on the net for those short breaks. My producer chimes in and voilà, we have a show.”

“I’m sad he left but he has to do what a young dad with major responsibility has to do.”

Charles says he’s spending his time “hanging out with my son, listening to a lot of music, and looking for a new gig.”

Charles started at CFQR-FM (what was then Q92) in 2001,  writing for the Aaron and Tasso morning show, then left for CJFM-FM in 2009. He didn’t last long on the Virgin morning show, shuffled into an off-air position in 2010. He worked in various capacities for Astral until he finally left. Shortly thereafter he took the job at Mike FM.

I’ve asked station manager Marie Griffiths for comment. I’ll update this if I hear from her. The station, which airs English-language programs during peak hours and ethnic programs (particularly Greek) in other parts of its schedule, doesn’t subscribe to BBM Canada, so has no scientific way of measuring its audience.