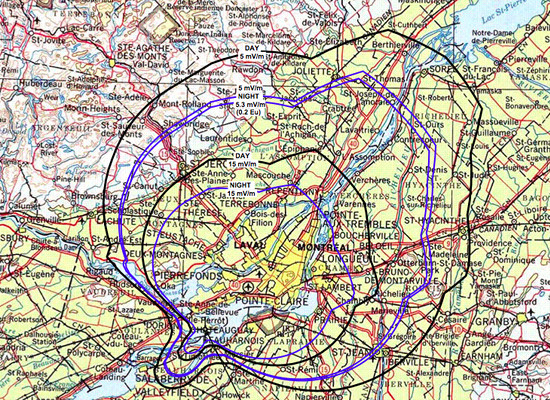 Proposed propagation pattern of station at 850AM

Two years after CKAC abandoned the all-sports format to switch to a government-subsidized all-traffic station, Montreal is one step closer to getting a French-language all-sports radio station again.

On Wednesday, the Canadian Radio-television and Telecommunications Commission approved a licence for 7954689 Canada Inc. (Tietolman-Tétrault-Pancholy Media) to operate a French-language sports-talk radio station in Montreal at 850 AM.

The station, whose transmitter would be in a field on Ile Perrot and be pointing toward Montreal, would operate at 50kW daytime and 22kW nighttime, which as the graphic above shows would pretty well cover the Montreal area and its shores.

Its format is a bit unclear. The CRTC decision describes it as “among other things, debate programs, sports news, live games, interviews and open-line programs.”

The “live games” part will be difficult, at least at first. Canadiens games air on Cogeco’s CHMP 98.5FM, and Cogeco retains Canadiens French-language radio broadcast rights until the end of the 2013-14 season. The station also airs Alouettes games. And it’s unlikely to easily give up on either.

This leaves Impact games which could be picked up by the new station. The Impact doesn’t have an official French-language radio broadcaster. And there’s plenty of out-of-market programming like tennis and golf and baseball. But the lack of other French-language sports radio stations in North America means it will have to at least translate all the coverage itself, unless it does something weird like sharing play-by-play guys with RDS.

The commission evaluates a market before awarding a licence for a new radio station to determine if the market can sustain it. In this case, the CRTC did not find any evidence that other stations could be threatened by this new one (competitors didn’t write to the CRTC to oppose this application), but did raise a concern that it “may face significant challenges when attempting to establish its presence in the market.”

But, taking into account the two existing licences and the potential for cost-savings by sharing resources, the commission felt it had a good chance and “would be a valuable proposition for listeners and small advertisers in Montreal” now that the market lacks a French-language all-sports radio station.

The CRTC has given the group exactly two years to get the station on the air, though it can grant an extension if necessary.

The 850AM frequency in Montreal has been silent since CKVL (which was started by Paul Tietolman’s father Jack) went off the air in 1999, replaced by Info 690.

TTP Media has licences for English- and French-language news-talk radio stations at 600 and 940AM, respectively. Neither has launched, but the French one at least is expected to be on the air by its deadline in November.

The group has promised an announcement within the next few weeks outlining its plans.

Statistics also released on Wednesday show that the three French-language AM stations in Montreal collectively (CKAC 730,  CJLV 1570 and CJWI 1610/1410) were back in the black for the first time since at least 2008. But that came at a price. From 86 employees when Info 690 still existed, to 47 after it shut down, it now has only 27 spread across the three remaining stations.

*CORRECTION: It turns out CJMS didn’t report financial figures, so it’s not included in the list of stations. That leaves CKAC, CJLV and Haitian station CJWI as the only French-language commercial AM stations in Montreal.