Apparently, the city council in Westmount isn’t keen on the idea of a high-speed rail link between downtown and the airport going through their little town on the lines currently used by the AMT commuter trains going to Windsor Station. Instead, they’d prefer if the route used tracks further south in St. Henri.

The reasoning is somewhat complicated, and has to do with some very technical aspects of the two tracks. In order to better explain it, I’ve created a diagram of the situation below: 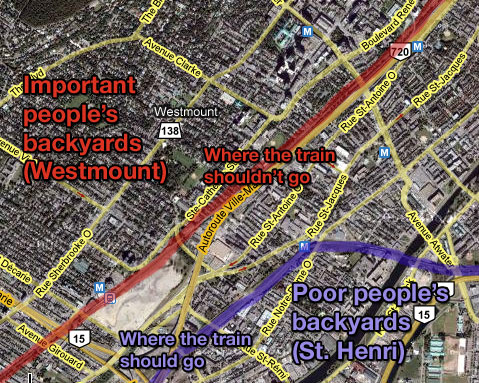 As you can see, it’s better for everyone involved if the train uses the lower tracks.

(I realize this is classic NIMBYism and not specific to Westmount, but you’d think it would occur to them that such a suggestion without any reasons behind it would lead to this kind of impression.)