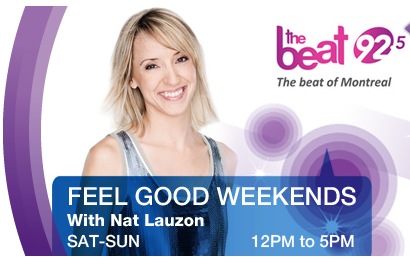 Nat Lauzon, the former daytime DJ at Mix 96/Virgin Radio until she left to join what was then called the Q, began her first shift as the weekend afternoon host Saturday on CKBE, 92.5 The Beat.

The first day of one of Montreal’s biggest (and yet perhaps most underrated) radio personalities was remarkably low-key. Her first words on air, just after noon, sounded like this. Another few words at 12:37pm, but otherwise it was all about the music, following The Beat’s 10-in-a-row-to-start-each-hour thing.

Off air, she announced the new job this morning on her Twitter account and her Facebook page, and got a congratulatory tweet from fellow-Virgin-to-Beat-turncoat Cat Spencer, along with a bunch of messages from fans (some only finding out now that she’s switching stations).

Part of the low-keyness was necessary, Beat General Manager Mark Dickie said this week, because Lauzon’s contractual obligations to Astral expired only at midnight, exactly three months after her last day at Virgin (that’s why she’s only starting now when the “new station” launched more than a month ago). So the station couldn’t put her on air or do much to advertise her before today. Even the web page for her show isn’t done yet.

Dickie promised he won’t let her go unnoticed though, and said a marketing campaign featuring Lauzon will begin on Monday. Combined with the one-woman Lauzon marketing machine that is her mother, we expect people will be seeing that adorable face around over the next little while.

As previously reported, Lauzon left Virgin on good terms, mainly because she wanted to devote more time to her other passions, her freelance voice-over work and her Montreal Dog Blog. Dickie jumped at the chance to hire Lauzon when he learned of her desire for a part-time job, and though he said he’s spending far more on her than he planned to for a weekend DJ, he has absolutely no regrets about doing so.

UPDATE: I listened to Lauzon’s first show as I did errands on Saturday afternoon (why oh why did I choose then to do grocery shopping?), and I was struck with one thought: Why am I not hearing her talk?

I know there’s a difference between talk and music radio. And I know there’s a lot less talking during the day than during morning shows when you need to throw in news, weather, traffic and contests. But Lauzon’s on-air bits were short and infrequent. Maybe a minute and a half each hour.

I’m hardly one to complain that there’s too much music. But why spend money hiring someone like Lauzon for such little on-air exposure? . (Now I do, see below.)

I’m reminded of the experiment that this same station did with Terry DiMonte in 2008, not long after he moved to Calgary. DiMonte went to work for a Corus station, Q107, and since Corus also owned Q92 at the time, they figured they’d make use of his following in this city and give him a noon-hour show here that he’d do from there.

It made sense, but it was stopped after less than a year for the simple reason that Q92 was paying DiMonte a lot of money to talk for just six minutes a day. His connection to the Montreal audience is important, but if you’re going to hire him, have him actually work instead of just sitting around during non-stop music marathons.

Lauzon has far too much talent for the amount of airtime she has, if that first show is any indication. Hopefully The Beat can find a formula for it that allows Montrealers to hear her voice and appreciate her quirky sense of humour without making it feel like talk radio. Even just a few seconds between every couple of songs can go a long way toward making the audience feel like they’re listening to the music with someone.

UPDATE (Oct. 17): Lauzon responds to me thusly about her talk time: “[It] was my choice to keep it simple. Getting used to new software/equipment and I really wanted to just keep ‘er on the rails and keep it simple while I get my bearings. Things will widen up over time (that’s what she said).”

That’s good to hear. We need more time for crude jokes like that on weekend afternoons.

Dickie confirms Lauzon will get more airtime, saying we should expect to hear her voice on The Beat as much every hour as we heard her on CJFM.

I personally think there could have been a stronger first impression, maybe a better introduction on her first show, but having a soft launch instead of a hard one isn’t going to discourage people from listening to her.

Lauzon has posted on her blog about her new job, and is asking listeners to take pictures of themselves next to billboards of her that are going up, and email those pictures to her.